They’re trying to raise enough money to purchase a bus for the use of the service users of St. John of God. If you’re looking for something to do on Friday night next, why not pop into The Listowel Arms. A great night is promised. 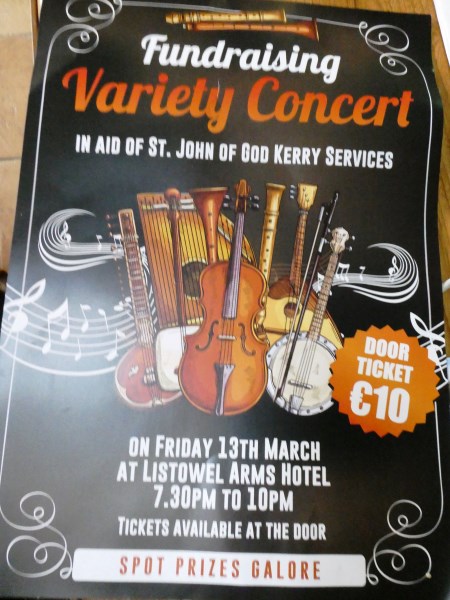 Two North Kerry fashion designers are in line for an award according to The Kerryman. 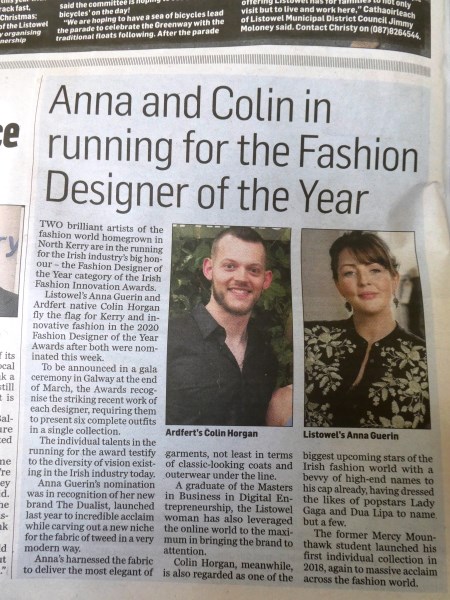 Last week I attended Saicrimint an Chéid Aithrí with my youngest grandchild, Cora. This happy experience is a far cry from my own daunting first confession.

Cora drew a picture of her “sin” or her ‘failure to love’ as it now is.

No gloomy confession box here. The little  boys and girls made their confession in the sanctuary in plain view of everyone. I even took a few pictures. 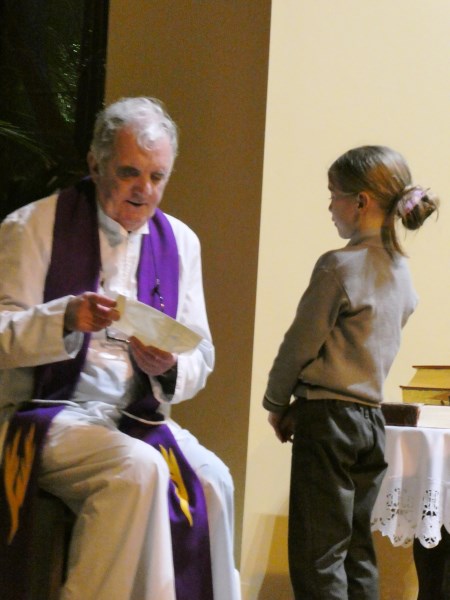 In the church of Christ our Light in Ballincollig, Cora presents her ‘sin” to Fr. George. 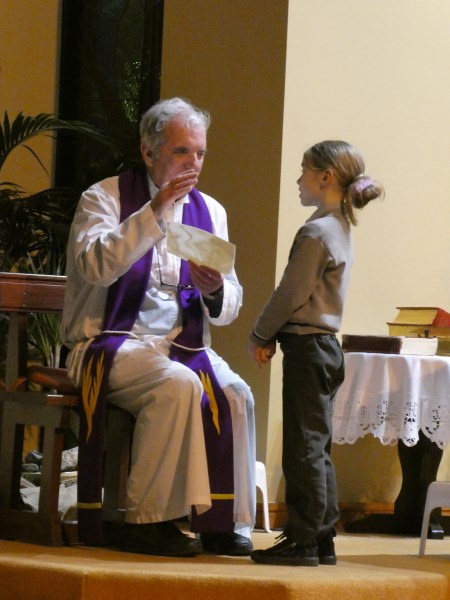 He listens as she explains the incident and then he gives her absolution. 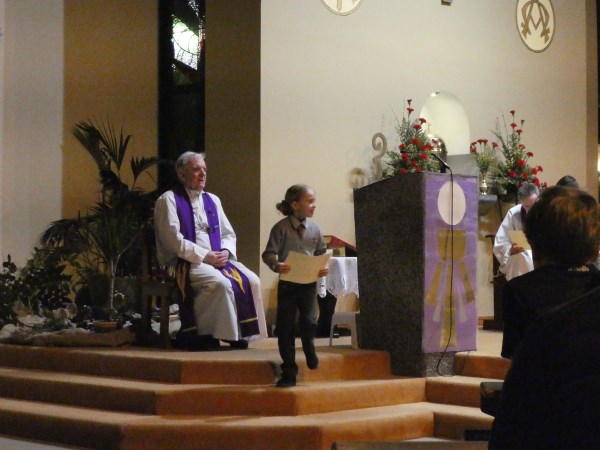 Cora skips down the altar steps, her sin confessed and forgiven. Happy days!

Gorta Walk in North Kerry in the 1980s 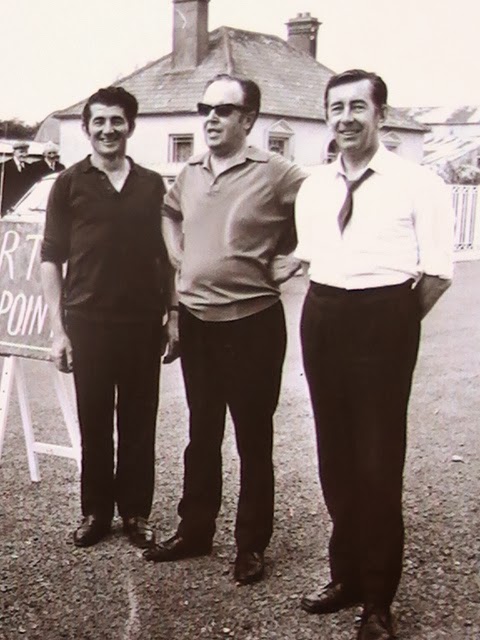 Michael Dowling,  Derry Tatten and Gerard Lynch on  a fundraising walk in Moyvane, Knockanure and Listowel in the eighties.

From Minutes of a Council Meeting in 1945

After a long and unavoidable delay the British ex-servicemen’s houses are about to materialise at last. The initial work on these houses which are being built by the Irish Soldiers’ and Sailors’ Land Trust, was put in hands last week by a local contractor and I understand that four houses will be built for a start. To the Rev Canon Adderley, M . A. Listowel, more than to any other man, is the credit due for the much-belated coming of these houses, for he never lost sight of the promises made to the Irishmen who helped England in the hour of need. 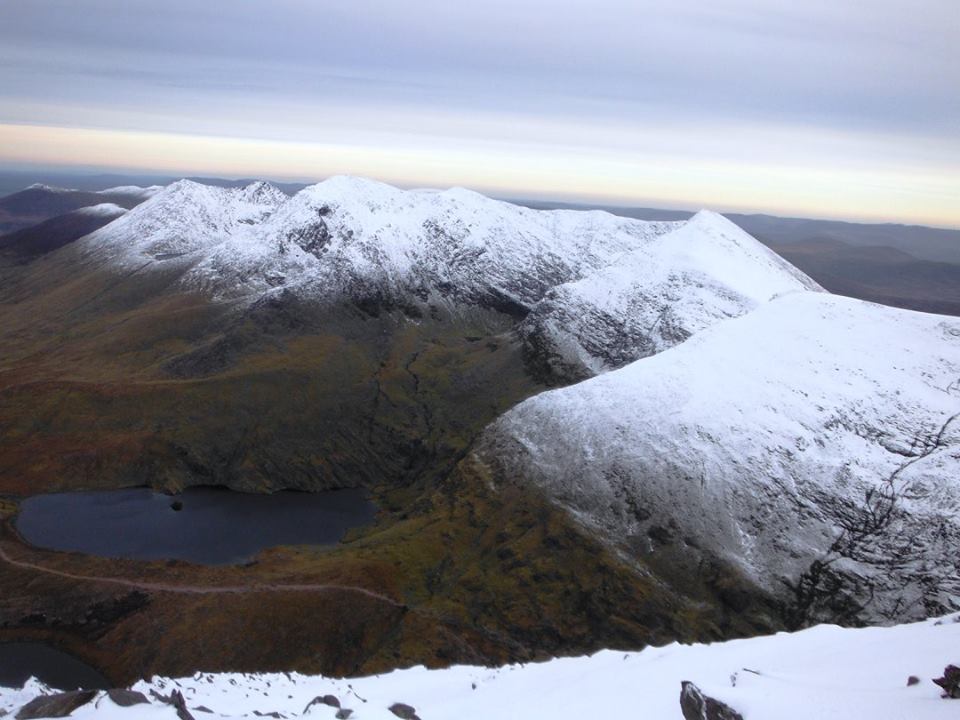 The saddest Corner of Town Today 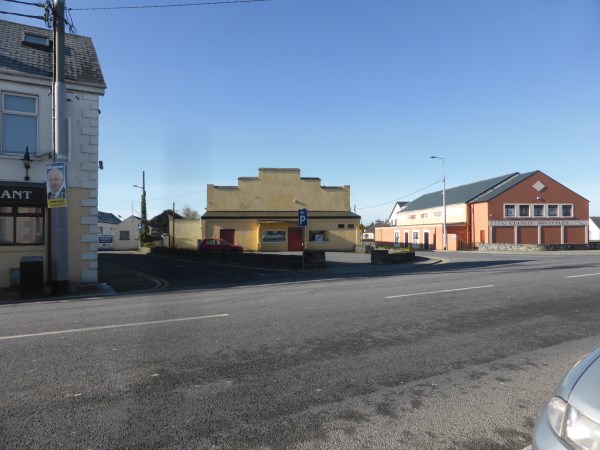 My photo shows,  on the far right, Casa Mia, once the bar owned by Kerry footballing great, Tim Kennelly. Beside it is the old creamery, once the gathering place for country people, where stories were told and news and gossip exchanged. Next is the building that was once Walsh’s Ballroom , The Las Vegas where Sive was premiered and where many a romance began. And then The Classic Cinema, which Kieran Gleeson loved and nourished.

Kieran passed away yesterday, February 16th 2016 after a short spell with that cruelest of neurological diseases. MND. May the sod rest lightly on the gentlest, the kindest and noblest of souls. 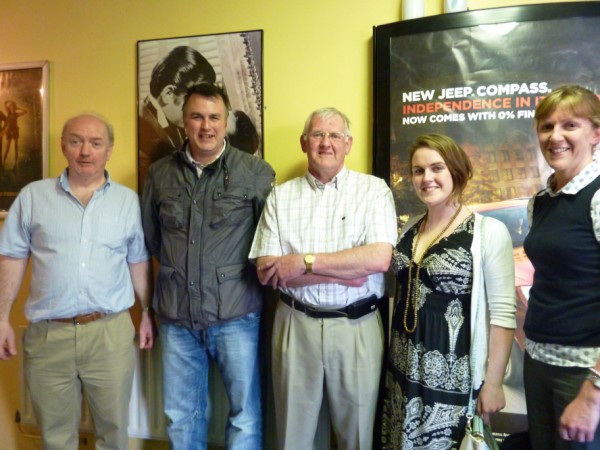 My photo from 2012 shows Kieran doing what he loved best, promoting a local film maker; 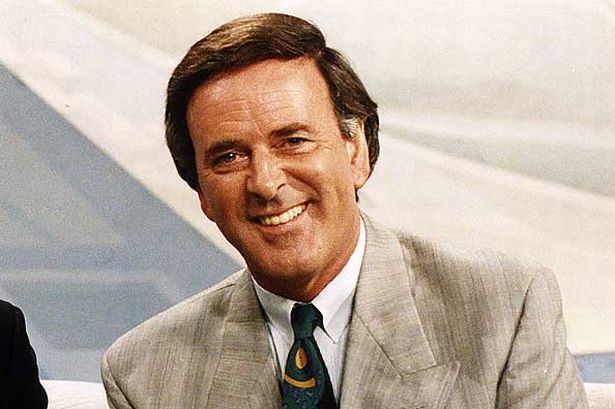 and this is what it said in the paper about him

APRIL is almost here once again and with it come the glamour and excitement of the Rose of Tralee dances.

BACHELOR GAY Terry Wogan, the gay, bachelor compere of T.E,’s “Jackpot,” is known to thousands throughout the country. Those without, T.V. will have heard, him news announcing on Radio Eireann for the past three yews. He is probably one of the most, popular television personalities on T.E,.—proof of this lies in the number of Valentine cards he received, on February 14 last—130. Terry hails from Limerick and was a bank official before joining R.E.,

Junior Griffin recalls the early days on Badminton in Listowel 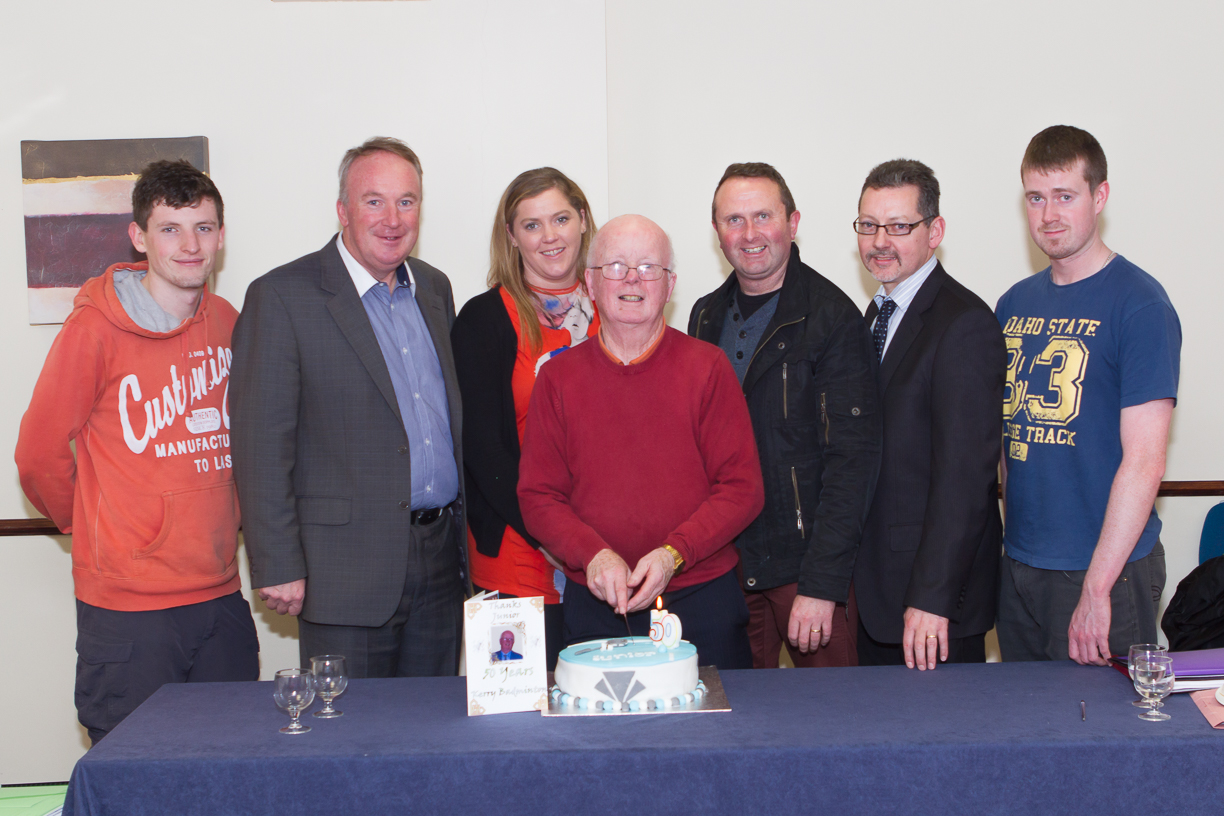 His colleagues in Listowel Badminton honoured Junior on his 50 th. year promoting the sport in town.

Here Junior writes about the early days of the club.

BADMINTON was invented long ago; a form of sport played

in ancient  and .  Badminton came from a child’s game

called battledore and shuttlecock, in which two players hit a feathered

shuttlecock back and forth with two tiny rackets.  The game was called

“” in  during the 18th century, and British officers stationed

there took the Indian version back to  in the 1860’s. The army men

introduced the game to friends, but the new game was definitely launched there

at a party given in 1873 by the Duke of Beaufort at his country place, “Badminton”

in Gloucestershire.  During that time the game had no name, but it was referred to

as “The Game of Badminton” and, thereupon, Badminton became its official name.

Until 1887 the sport was played in  under the rules that prevailed in .

They were, from the English viewpoint, somewhat contradictory and confusing.

Since a small army of Badminton players had been recruited, a group formed itself

into the  Badminton Club, standardised the rules, made the game applicable to English ideas and the basic regulation (of ) was formed to take over the

authority of the  Badminton Club, and the new group made rules, which now

govern the game throughout the world.

The sport seems to have come to  almost immediately. It is known that

Badminton was very strong in , Wicklow, Coleraine and Ballymoney

Indeed, the world’s first ever International Badminton match was played between  and  in  in the 1902/03 season and, except for the

two world wars, became an annual fixture alternately home and away until 1971/72.

So, as one can see the sport of Badminton was in its infancy when it came to Listowel.

Regretfully, except for the dance card found by Jim Halpin, there is no other record pertaining to that time and, unfortunately, there are no names listed as to who was involved in the founding of the club.  Hopefully, if those founding fathers came back today they would be proud to see the club they started in such a strong position one hundred years on.

This made my Day 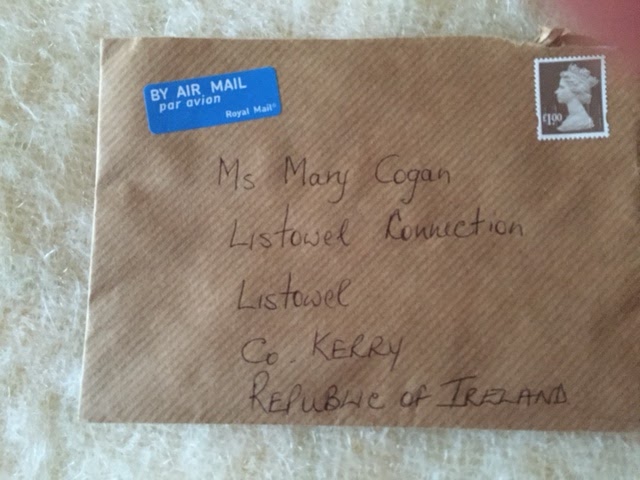 Last week I received this. Well done, An Post, and thank you, Philomena.

Errors Corrected and Clarifications Given

My little fun fact about the days of the week in February was not in fact a fact at all. A man who deals with figures and who notices such things pointed out to me that every February has 4 of every day of the week. 2016 is a leap year so it has 5 Mondays.

Now to the G.A.A. photo which Junior gave me; 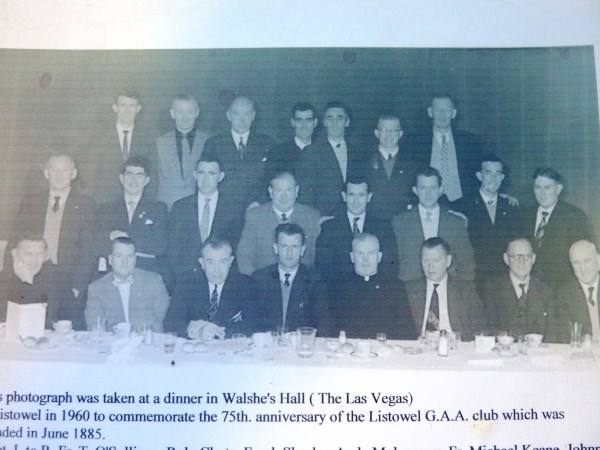 What he gave me was a print of a photo with the names underneath. Junior did not in fact write the names himself so he takes no responsibility for any mistakes here.

Margaret Dillon thought that the priest in the photo looked more like Fr. Gerard Dillon. She remembered that Fr. Dillon was a great step dancer and participated in many concerts with her.

As usual with Junior, one story calls up another memory and he has a story to tell. He says

“My memory of Fr. Dillon, a lovely priest, was of a man with a fine bushy head of black hair. The one thing I know is that Fr.O’Sullivan would have been a curate in Listowel much earlier than that,in the early or middle 40s I would say. Could tell you a small story about him saying the 8 o’clock Mass one Sunday morning. He became P.P. of Duagh after that but was a man that was very much involved in golf.

Around the time that photo was taken the clergy in Listowel were Canon Peter O’Sullivan, Fr. Matt Keane and Fr.Gerald Dillon.  A great team of priests. The house keeper was Mrs. Kearns and I became very close friends with her son Olly and I spent a lot of my time in the Presbytery and knew the priests well. Olly’s son Liam is the well known inter County football manager, with Tipperary at the moment”

Such is the beauty of the internet that one memory shared leads to lots of other stories and the above photo was no exception.

The man in the front row is second from left is the late Roly Chute who ran a famous chip shop at the corner of Ballygologue Rd. across from the sports field.  Vincent Carmody shared  the following memory of the late Roly on Facebook;


“Whatever about the merits of Roly’s smart bow tie and dapper dress sense, nothing could compare to his wonderful chips, peas, and Donnelly’s skinless sausages, then washed down by a glass of milk.

In 1972, when I first became secretary of Listowel Emmets, training was at a low ebb at the start of the year . I had an idea that we should adopt a professional approach, and offer a meal after training.

Firstly, I went to Roly Chute and asked him, what would he charge per player for chips, peas and sausages. He thought for a minute and said,  “One shilling and sixpence and for an extra threepence, I’ll throw in a glass of milk.”

Next, I spoke to the chairman of the club, Mikey Kennelly, (father of the great Tim). I told him of the idea and Roly’s quote. Always a man for a new idea, “Right,” he said, “if you think it will work, go ahead.”

Agreement got, I went to Michael Collins and asked him to type a letter which we distributed to all the players. First night of training after that, 36 players turned up, not counting away players. Afterwards as Mickey and myself watched them all troop over to Roly’s cafe to be fed, he turned to me and said , “We will break the club, but we’d better go over as well, as I hear they’re great chips.”

As the training nights went by, the numbers settled down and each night less and less went over to Roly’s. The training bug had caught on. That year, the senior team won an unprecedented treble, County Junior Championship, North Kerry League and Championship.

Shortly after winning the replayed league final, Andy Molyneaux gave me a copy of the missive which I had given to the players and he declared, ‘”Thanks to your idea and Roly’s chips, peas and sausages, we have the best year ever in the club’s history.” 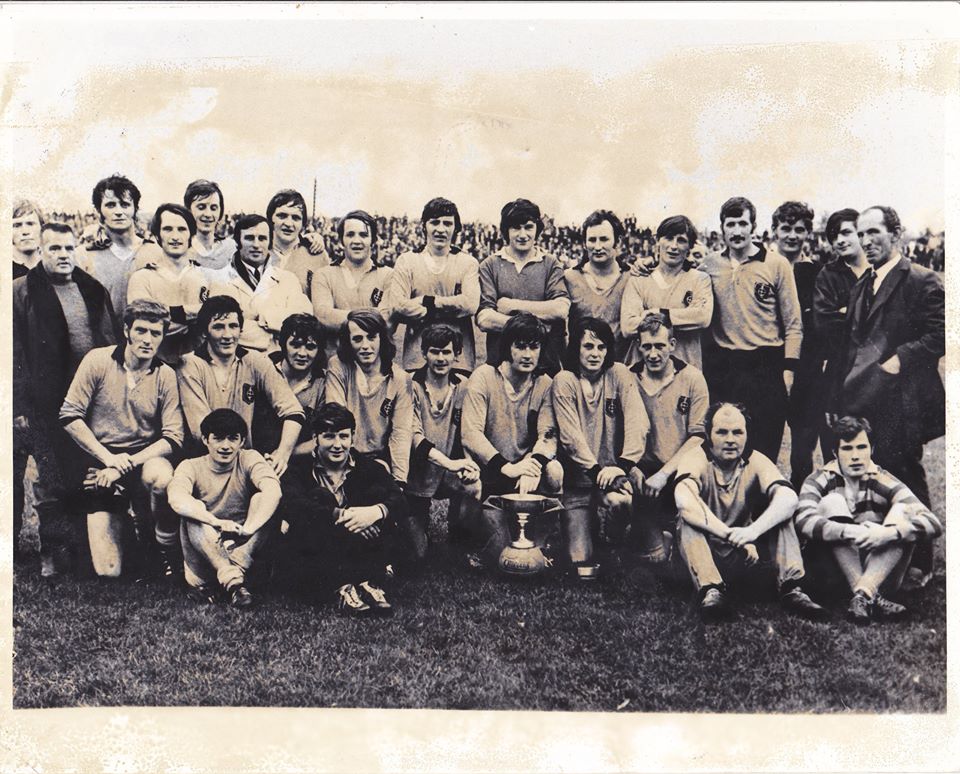 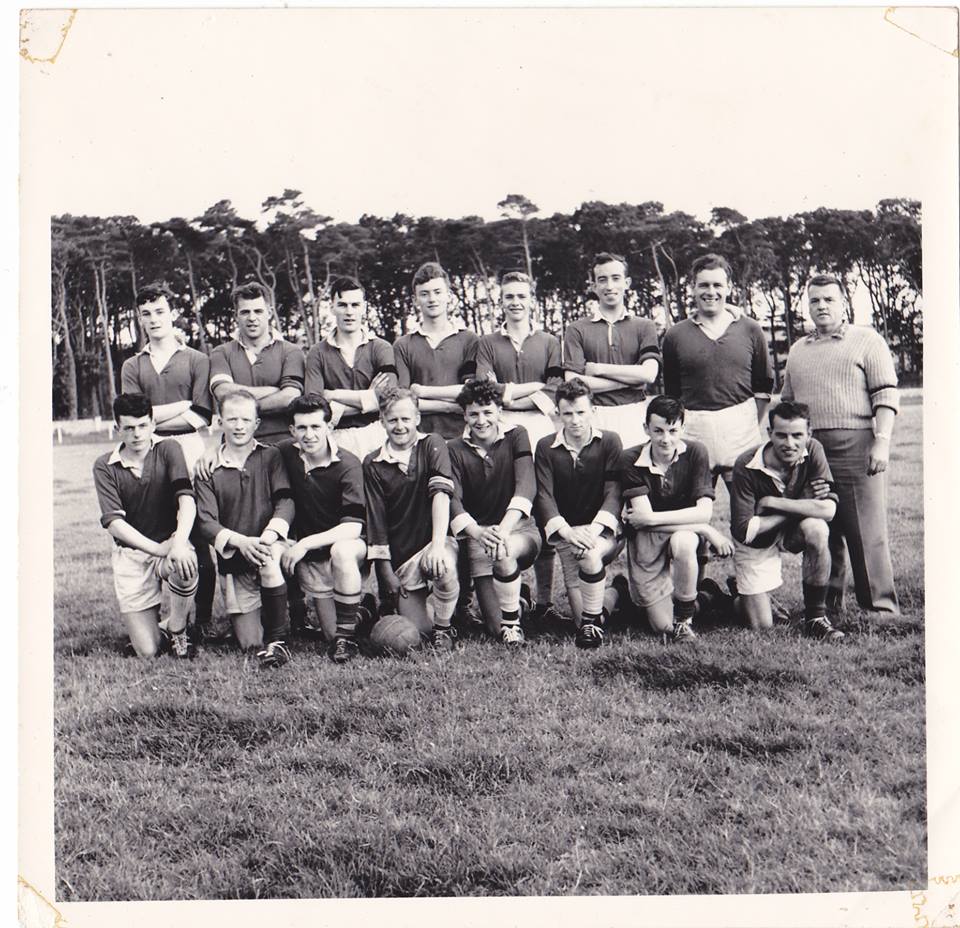