The report speaks glowingly of the town and of the work of the local committee. The two ladies who are singled out for mention for their early morning efforts to keep our lovely town in tip top order are Breda McGrath and Margaret O’Donoghue. 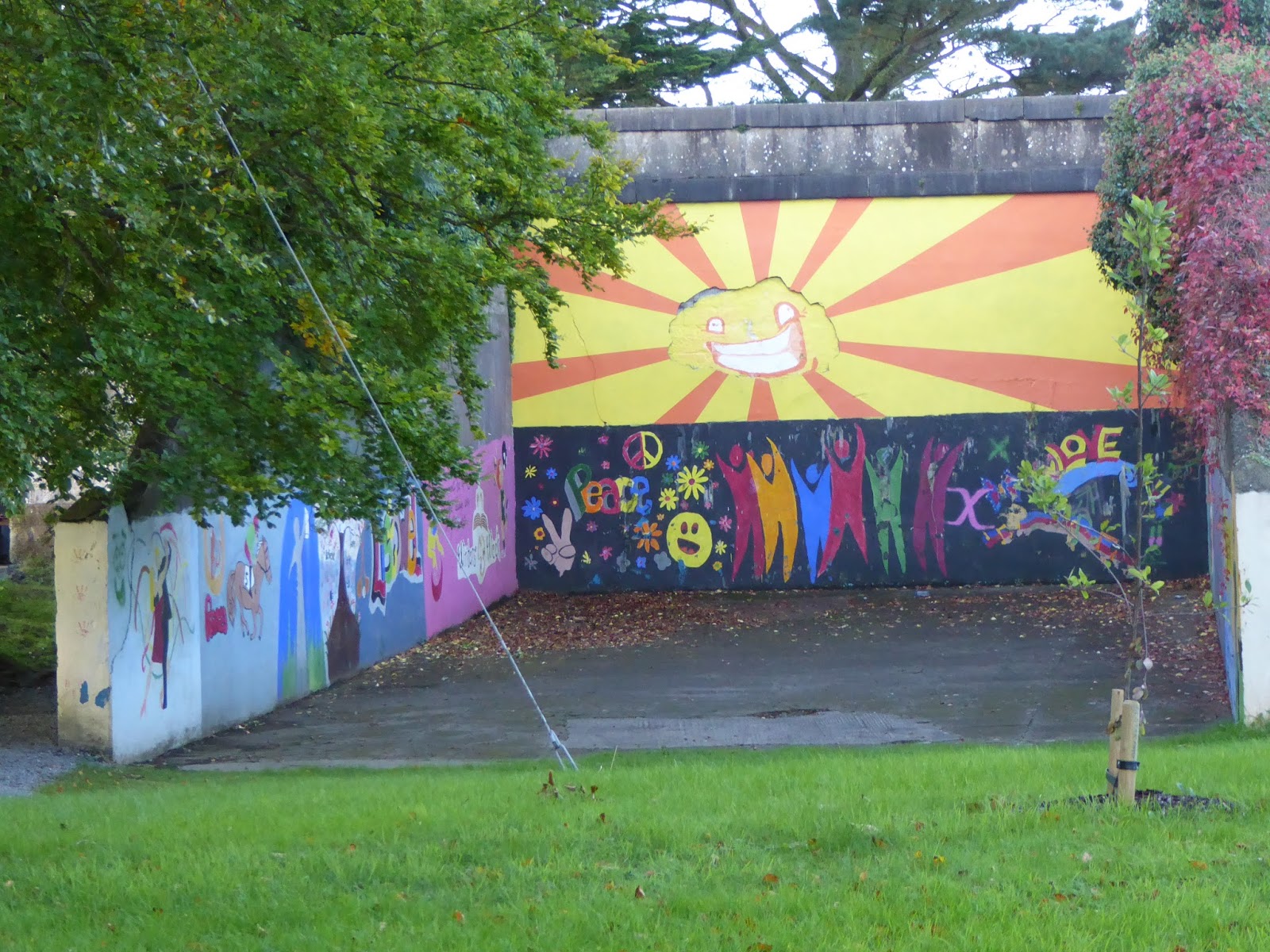 I learned a lot about Listowel by reading the report and when I headed out on my morning walk I determined to seek out areas that got high praise from the judges.

The judges loved all of the artwork, murals and statues in our town. They even suggested a few more. They loved the job that the young people have done on the old handball alley. 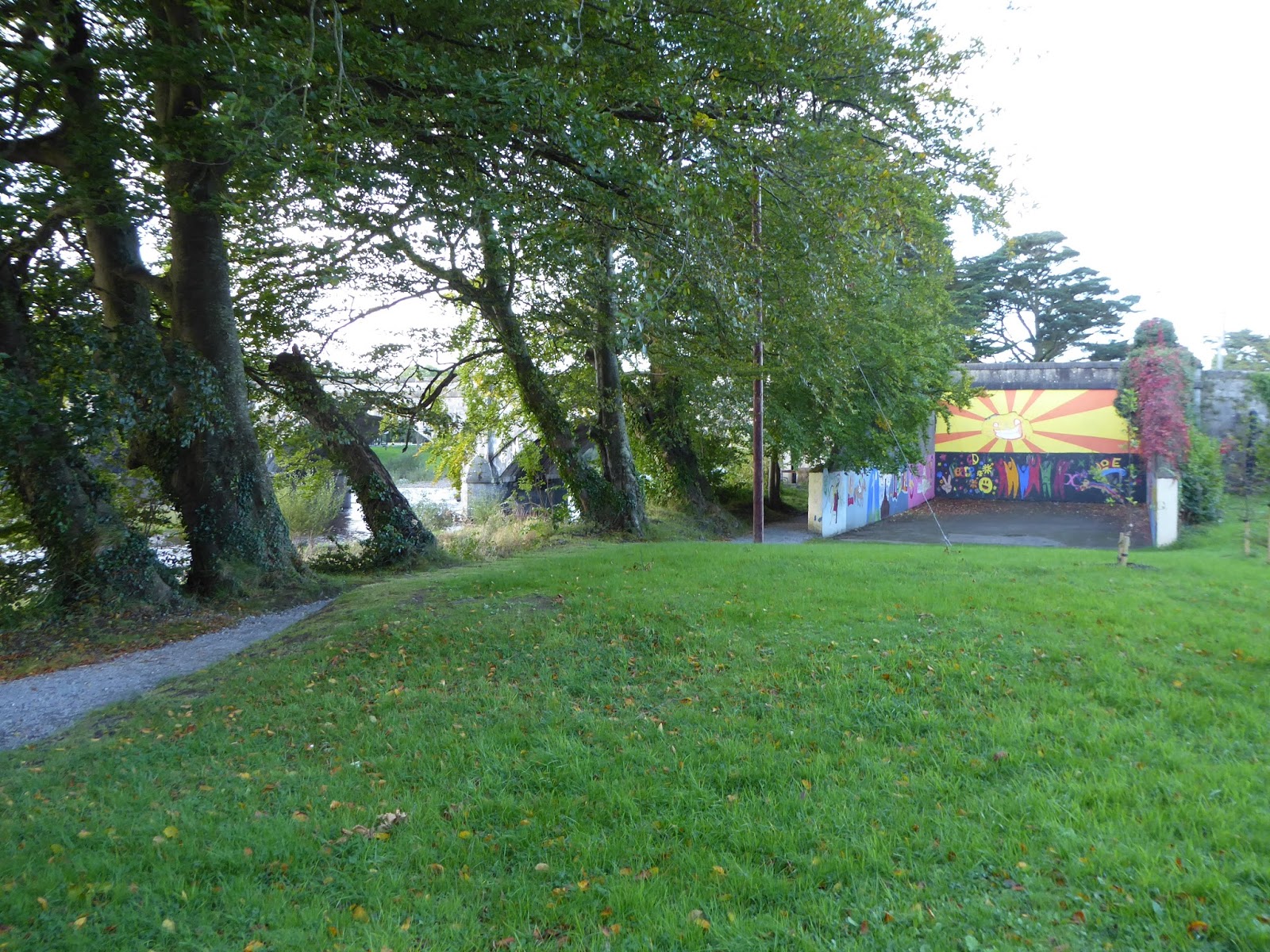 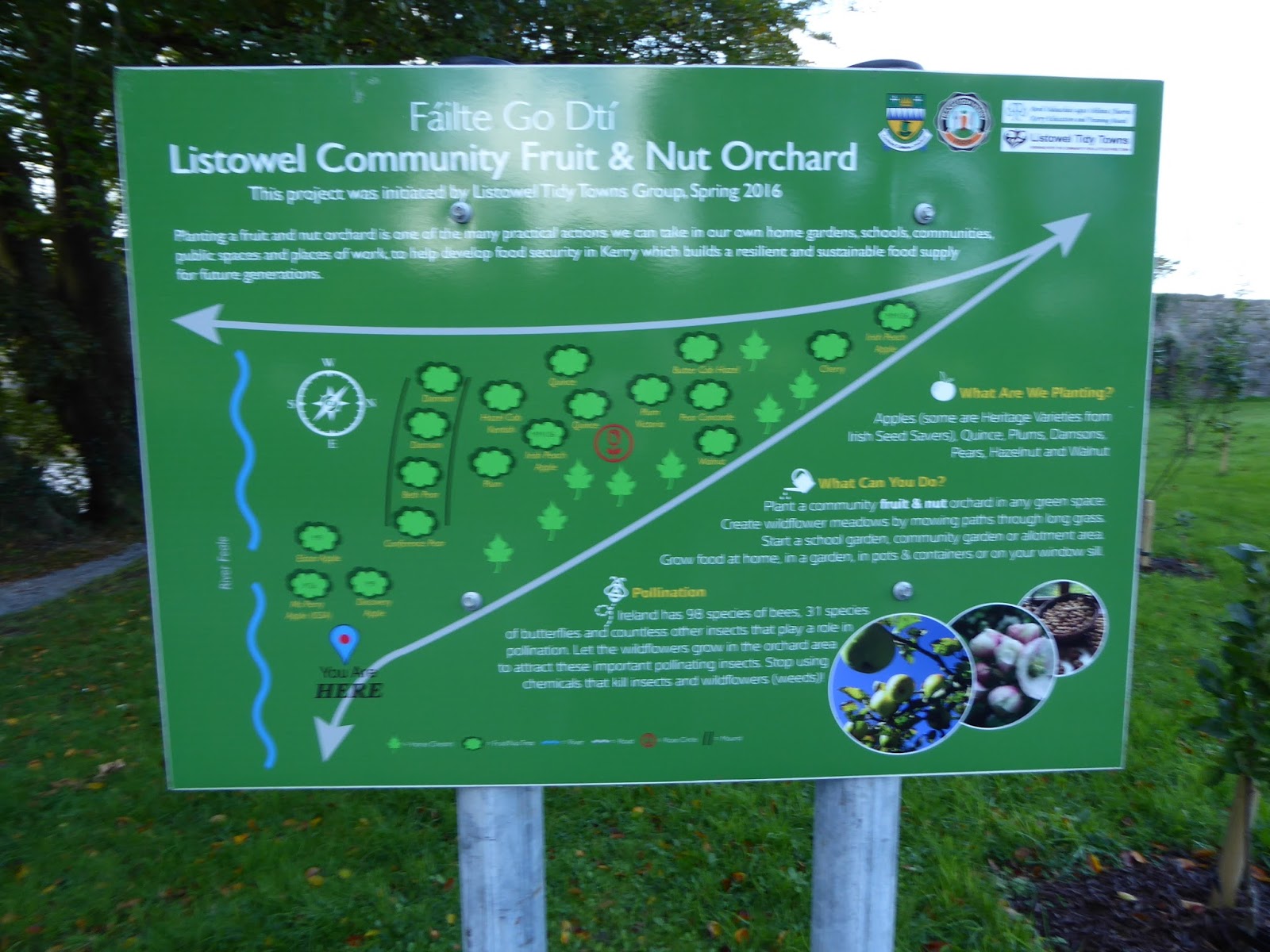 I have passed this sign several times and never stopped to read it. It took the Tidy Town judge’s report to alert me to this great initiative. 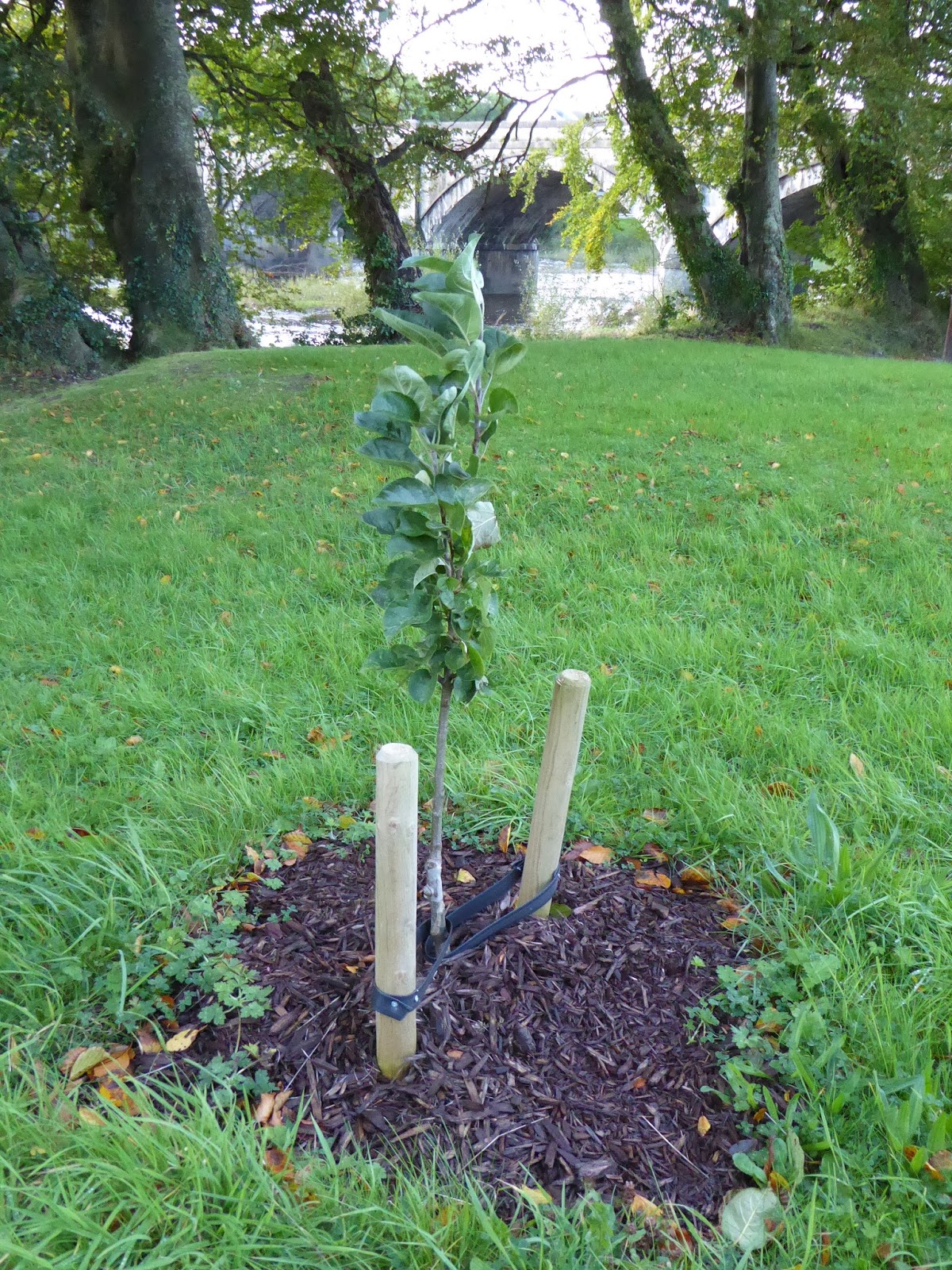 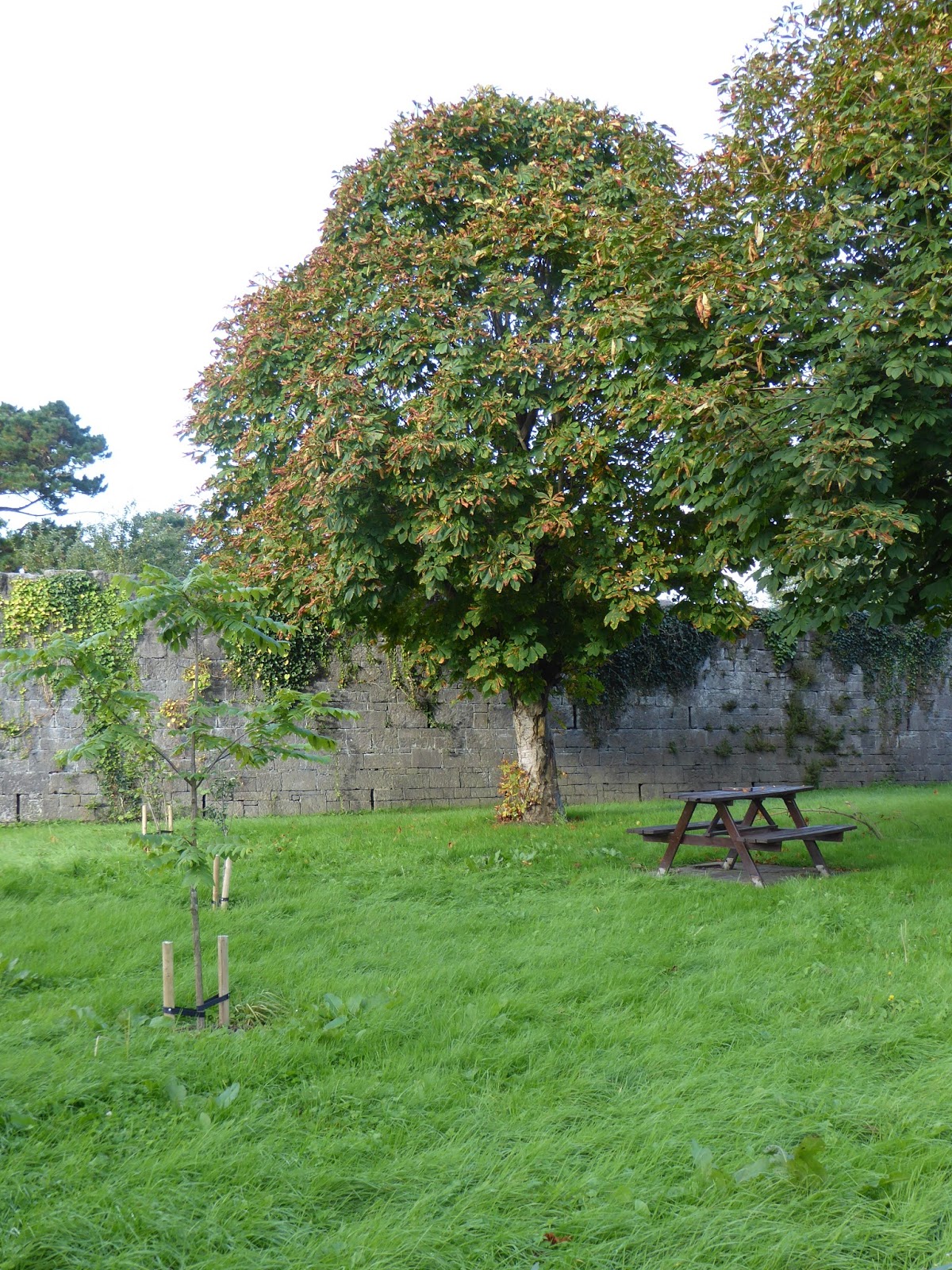 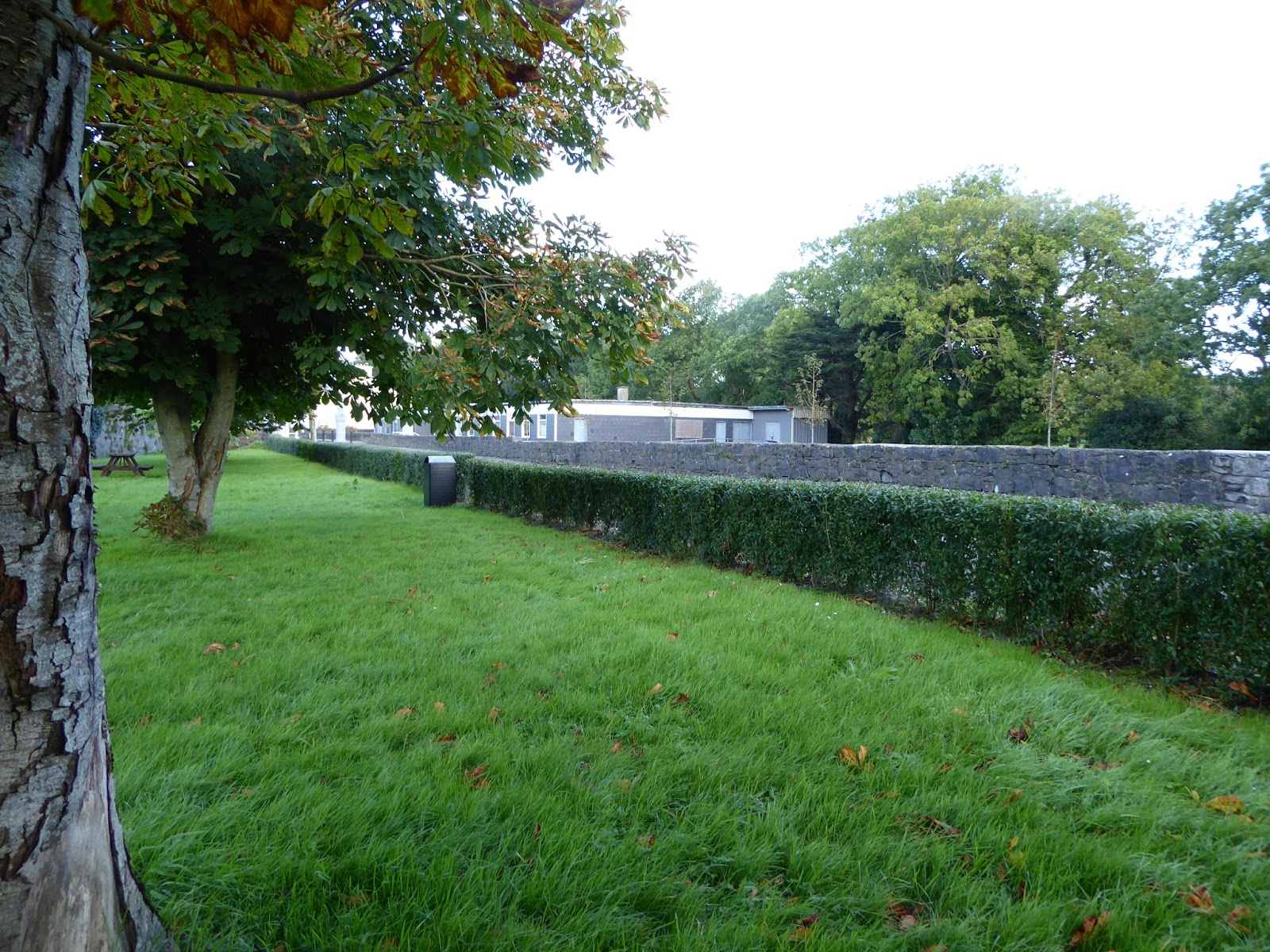 This is the fruit and nut community garden and picnic area by the river. 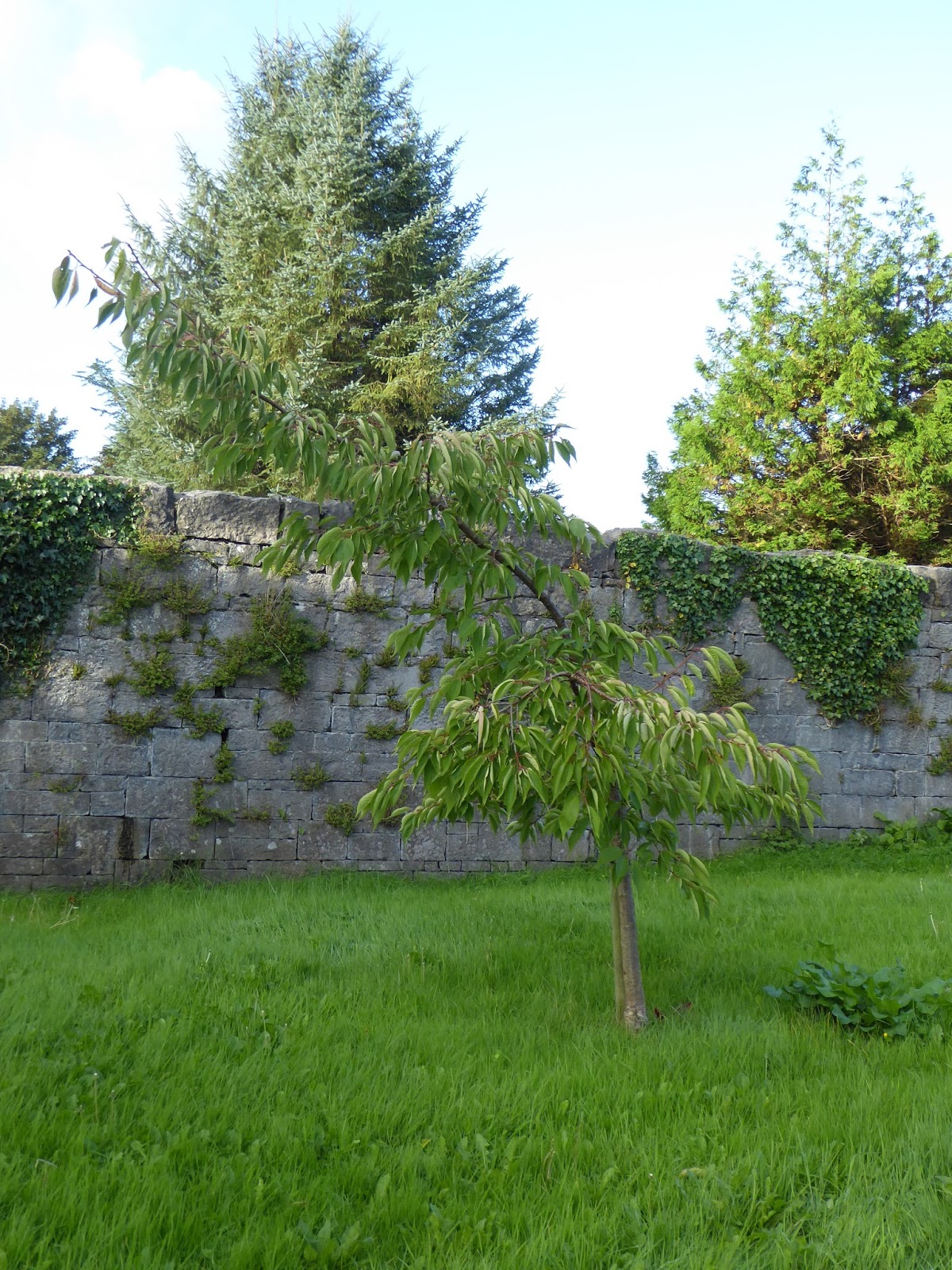 This area is bee and bug friendly and it has some lovely new planting alongside more mature trees. 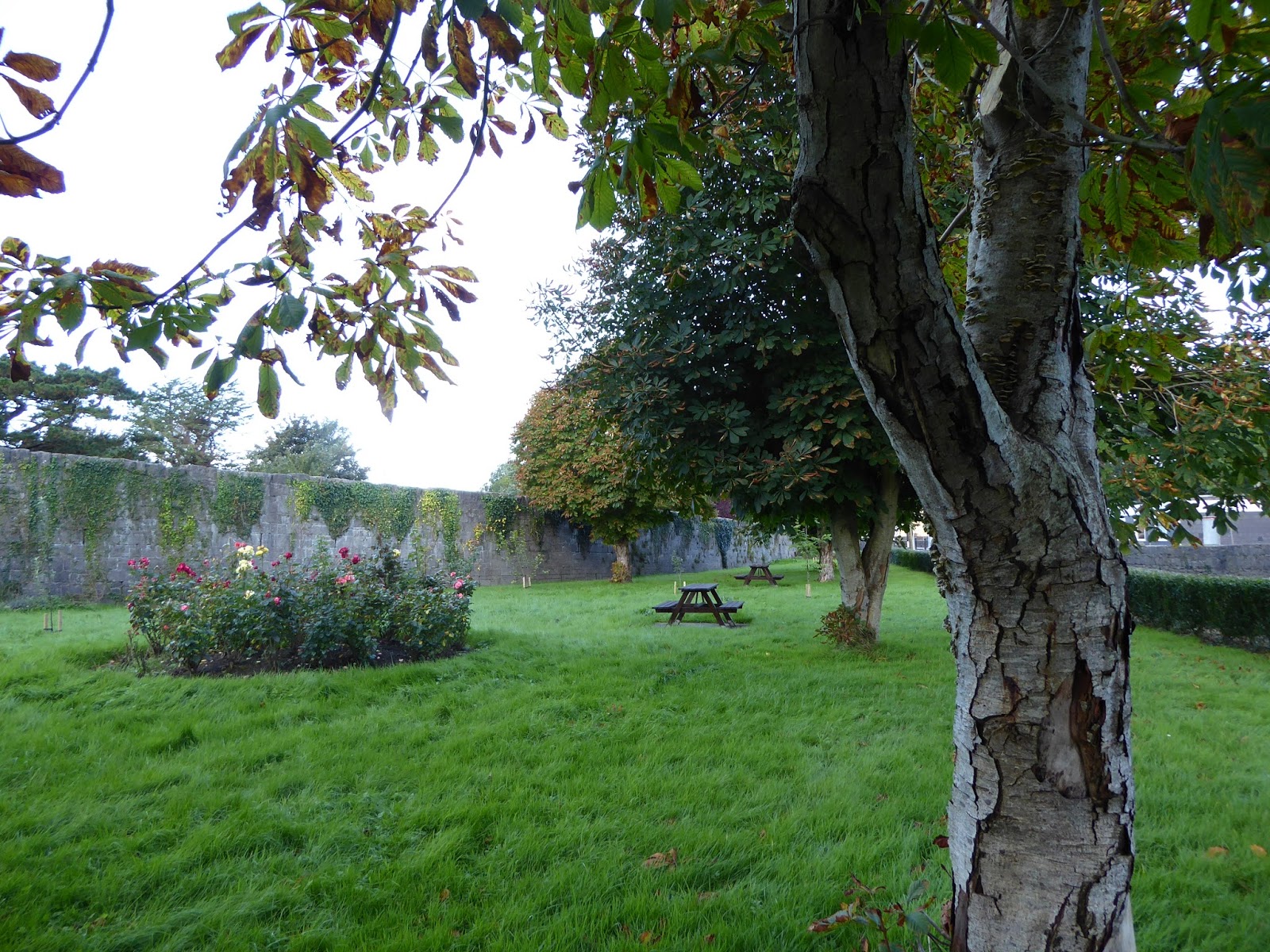 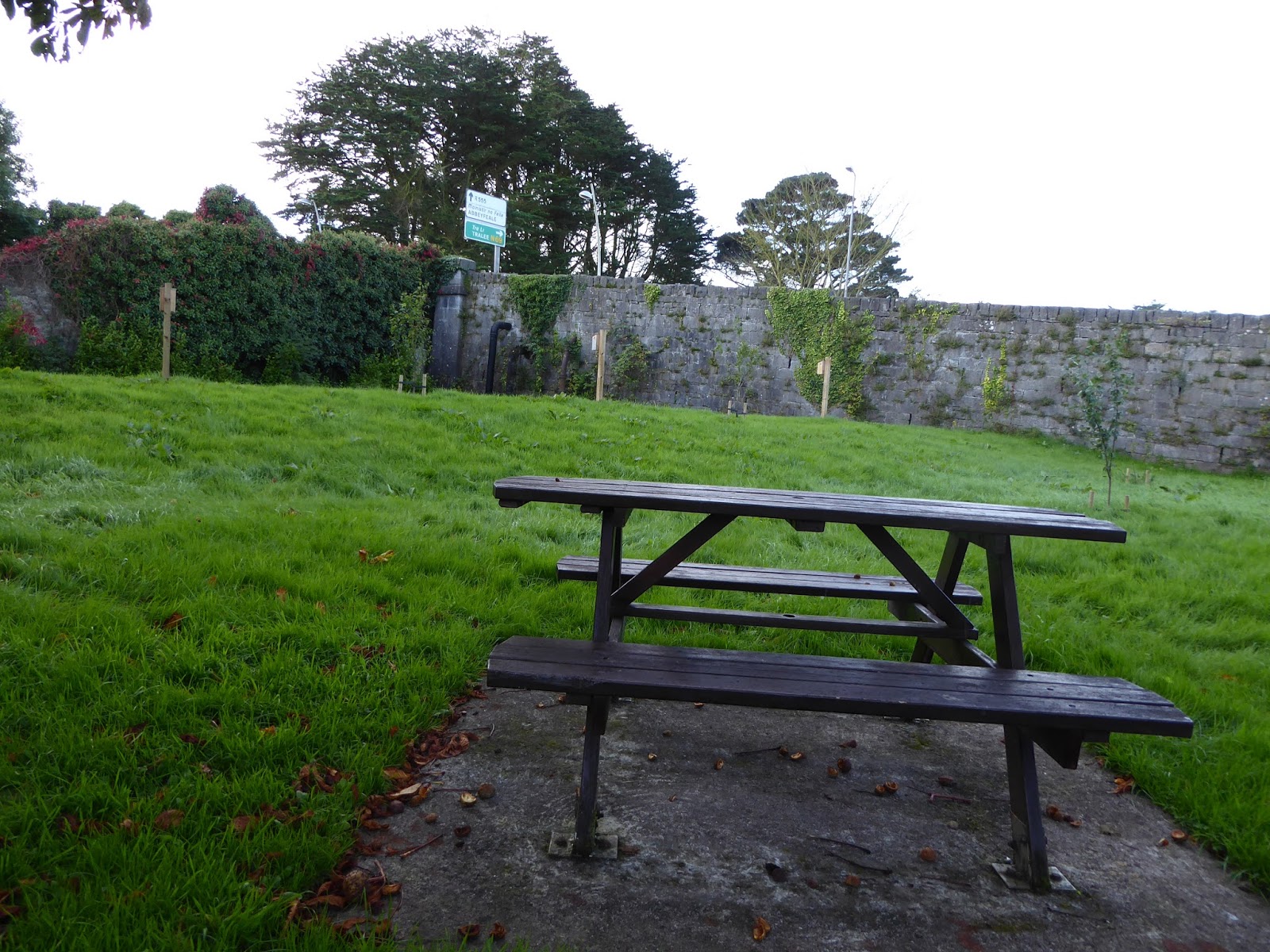 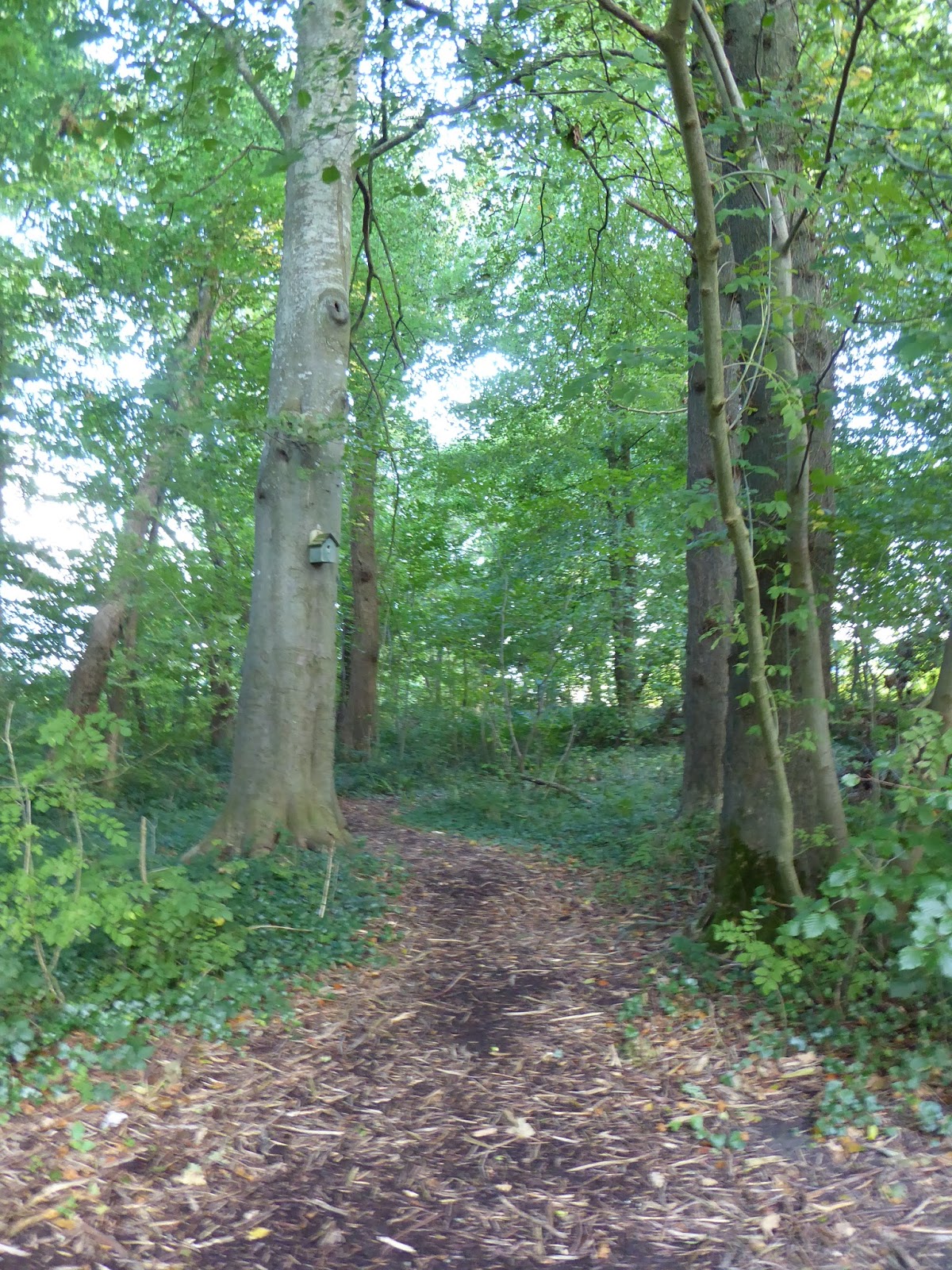 This walk through Gurtinard Wood is an education in birds, bees and local wildlife. 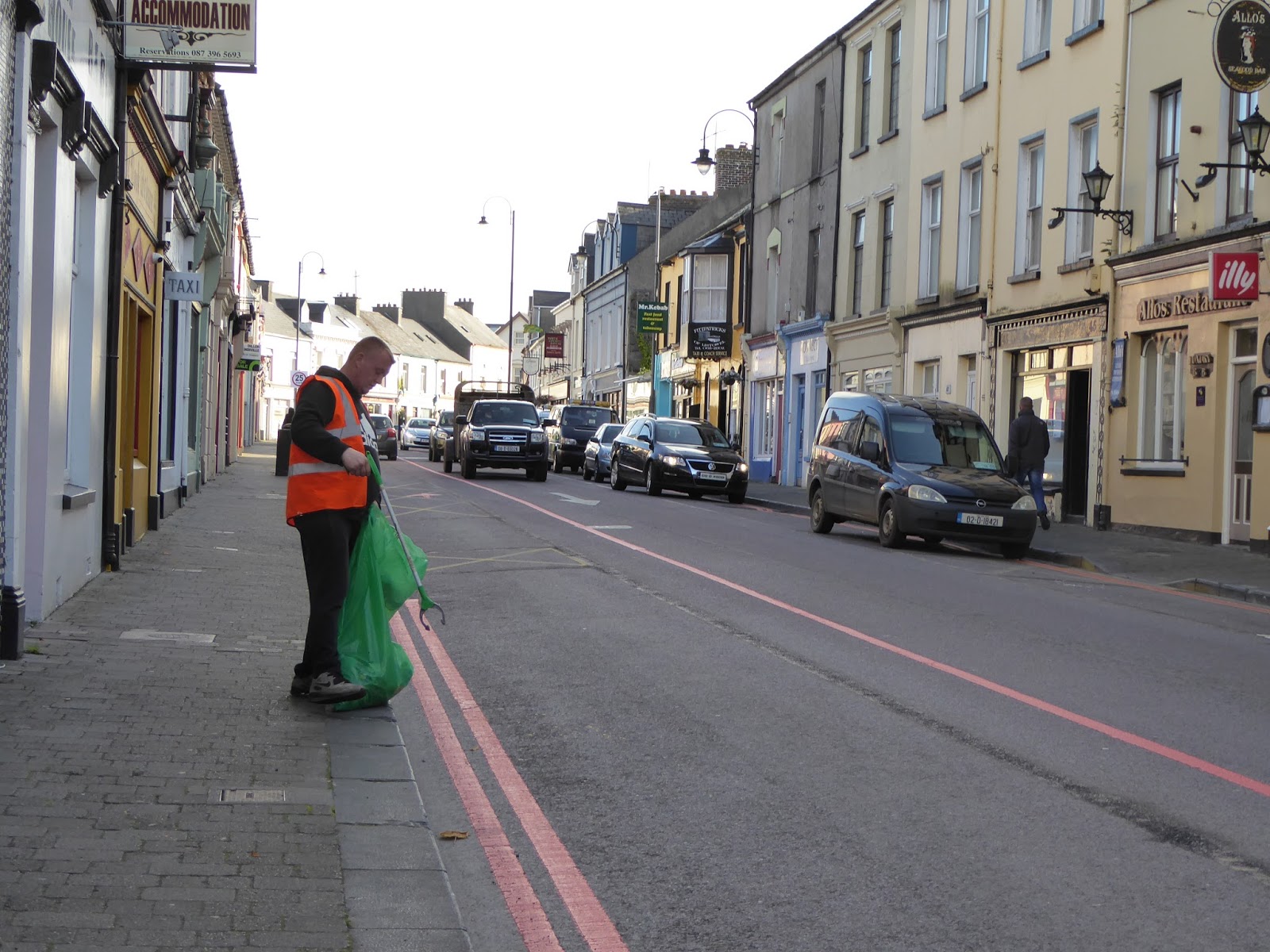 One of the Tidy Town volunteers was hard at work picking up the litter on Church Street.

Listowel Tidy Town Committee acknowledge that the town’s continued success in the competition is due to the efforts of all the town’s citizens. They recognised the contribution of so many in the town at a special award ceremony in Listowel Family Resource Centre last week.

The below photo from Listowel Tidy Town’s Facebook page shows he people who collected the awards on behalf of the winners. In many cases the award was earned by a team of people. Take a bow, everyone! 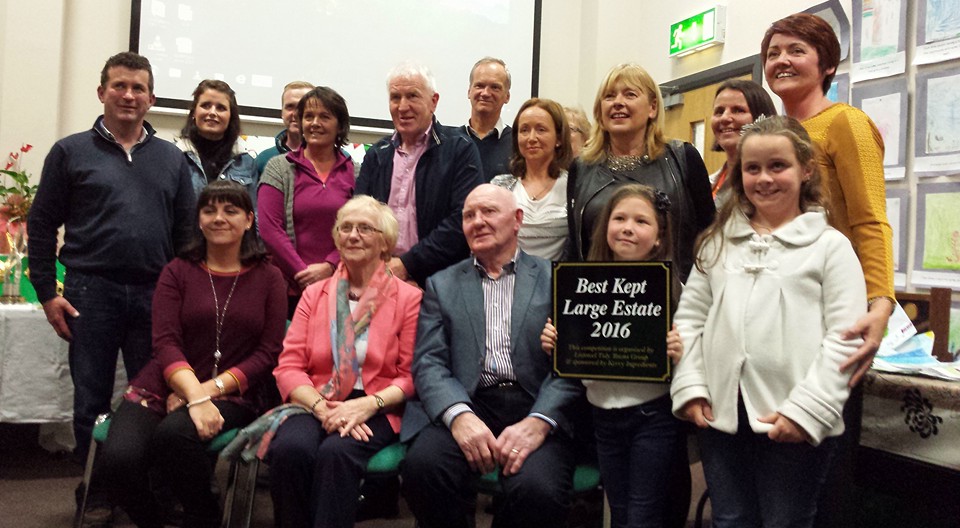 Be Careful on Listowel Streets

We all have to be very patient with these roadworks. It will be worth it all in the end. But while the upgrade is underway we  have to drive more slowly and carefully and be super aware of pedestrians who are unfamiliar with  our new traffic layout. 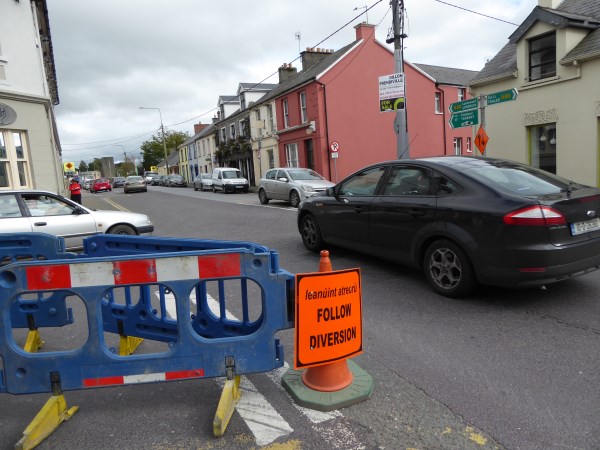 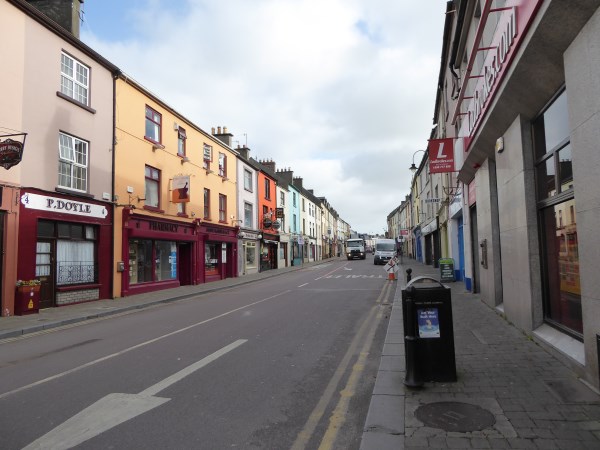 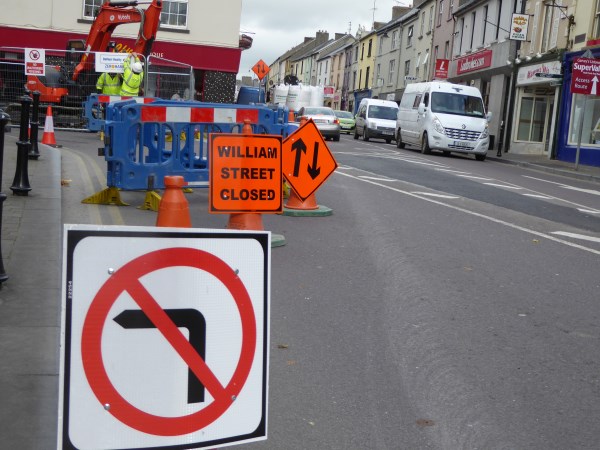 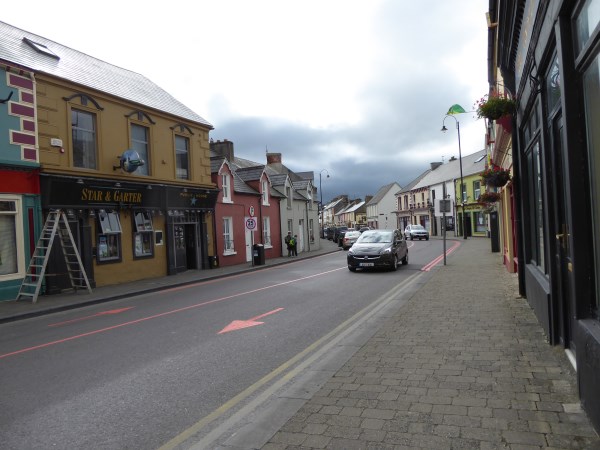 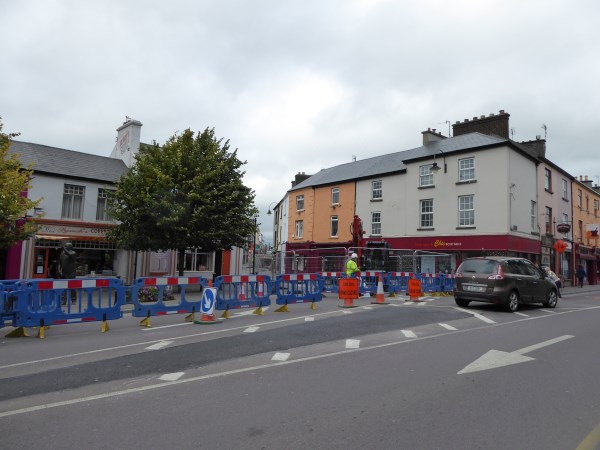 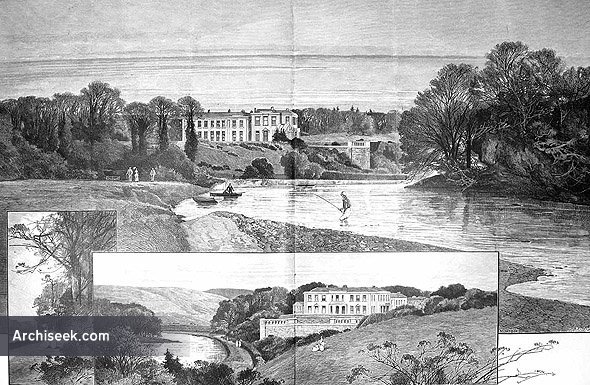 Alas, Convamore itself no longer stands. The house was one of
nearly 280 big houses burned during the Irish Troubles of 1919 – 1923. It was
built in the early 19th century for William Hare, later 1st Earl of Listowel,
to celebrate his elevation to the peerage. The architects responsible were the
celebrated Pain brothers.(3) The house, one of the first in Ireland to feature
large plate glass windows, was much praised by contemporaries.

“For the first in beauty and magnificence is Convamore, now
the property of the Honourable Richard Hare, eldest son of Lord Ennismore. This
place was much and justly admired for the singular beauty of its situation,
before it derived any adventitious graces from the hand of art. The addition of
a superb house and grounds, highly dressed and judiciously planted, fully
entitle it to the pre-eminence here bestowed. This fine mansion is not less
calculated to gratify the accomplished spectator within than without. Lord
Ennismore and his son are both distinguished for their skill and love of
painting, and have in consequence profusely adorned the house with pictures of
the best Masters”.(4)

“… in a fine domain stretching along the banks of the
Blackwater, and commanding an interesting view of the winding of that river
through rich masses of woodland to the picturesque ruins of the ancient castle
of Ballyhooly, situated on a rocky prominence over the Blackwater, and, with
the present church and the ruins of the former, both closely adjoining,
presenting a highly picturesque and romantic group”.

The Earl of Listowel sold off most of the Convamore estate in
the wake of the Irish land reforms of the early 20th century. The present Earl
recalled his childhood at Convamore as a time of “baked potatoes from the
bottom of a bonfire in the garden, and a vast Christmas tree dressed by my
grandmother, who was extremely annoyed when we dashed for the presents
underneath it, instead of admiring her work in dressing it. This was not
unnatural, as having a staff of at least 20 indoor servants and nothing to do
in the house, she had spent hours tying little baubles to the branches of the
tree. I also remember the golden pheasants which fluttered about like farm-yard
fowls in the great park. There was general jubilation when my grandfather
celebrated his 80th birthday by half a day’s woodcock shooting at
Convamore”.

During the War of Independence, a reign of terror swept across
Ireland with a bloody tit-for-tat war between the Black and Tans and the IRA.
The latter concluded that the big houses of pro-British gentry were
“legitimate targets”. One fine summer evening in 1921 three country
houses in North County Cork were burned down in retaliation for a reprisal.
Convamore was the first to go. Lord Listowel’s elderly niece, Mrs.
Wrixon-Beecher was in the house at the time. She survived but was found
wandering dazedly around the house without her false teeth, which perished in
the fire. (5)

(The above information was put together by Turtle Bunbury and the photo is from the internet.)

Convamore Houseremained the Irish seat of lord Listowel until it
was burned during the War of Independence in1921. Destroyed with
the mansion were “all its wealth of antique furniture and treasures of
art,” with the losses totalling as much as £150,000 by the earl’s estimate. Unoccupied for much of the 20th century it was demolished in
2000.