Building the new stand, Christmas Day in Listowel Workhouse and G.A.A. Social in 1960 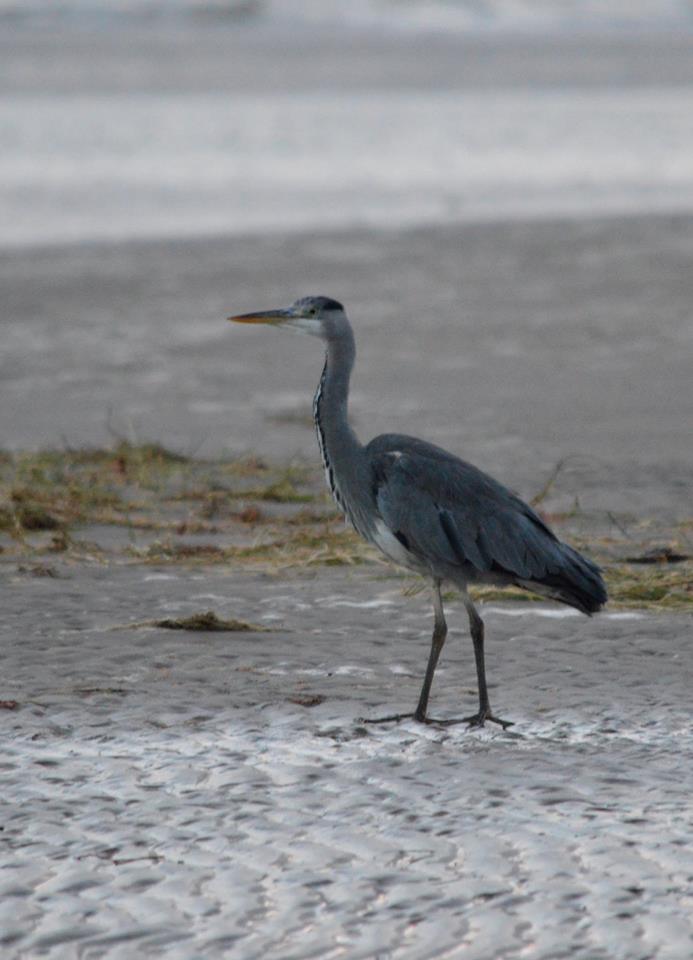 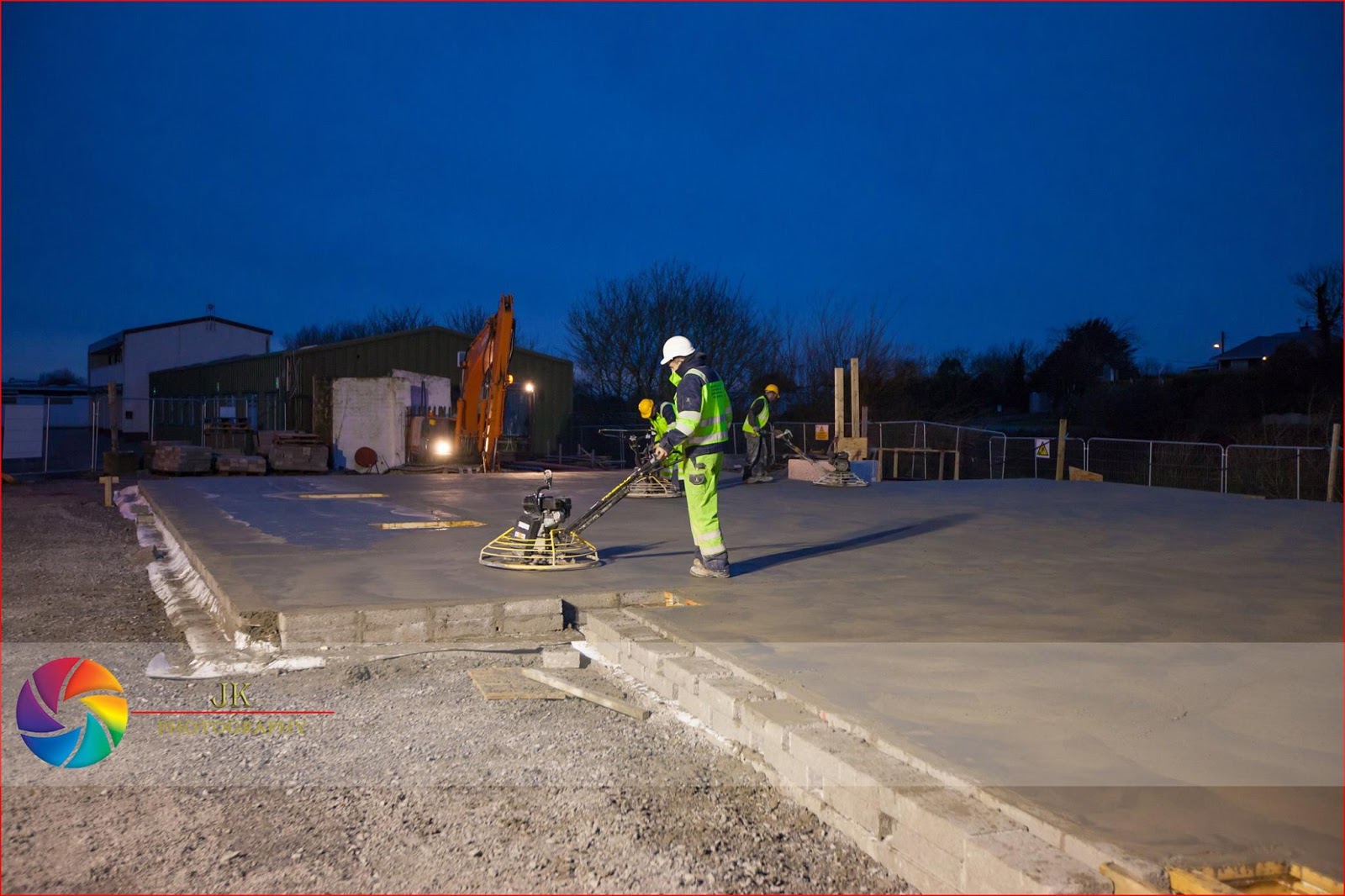 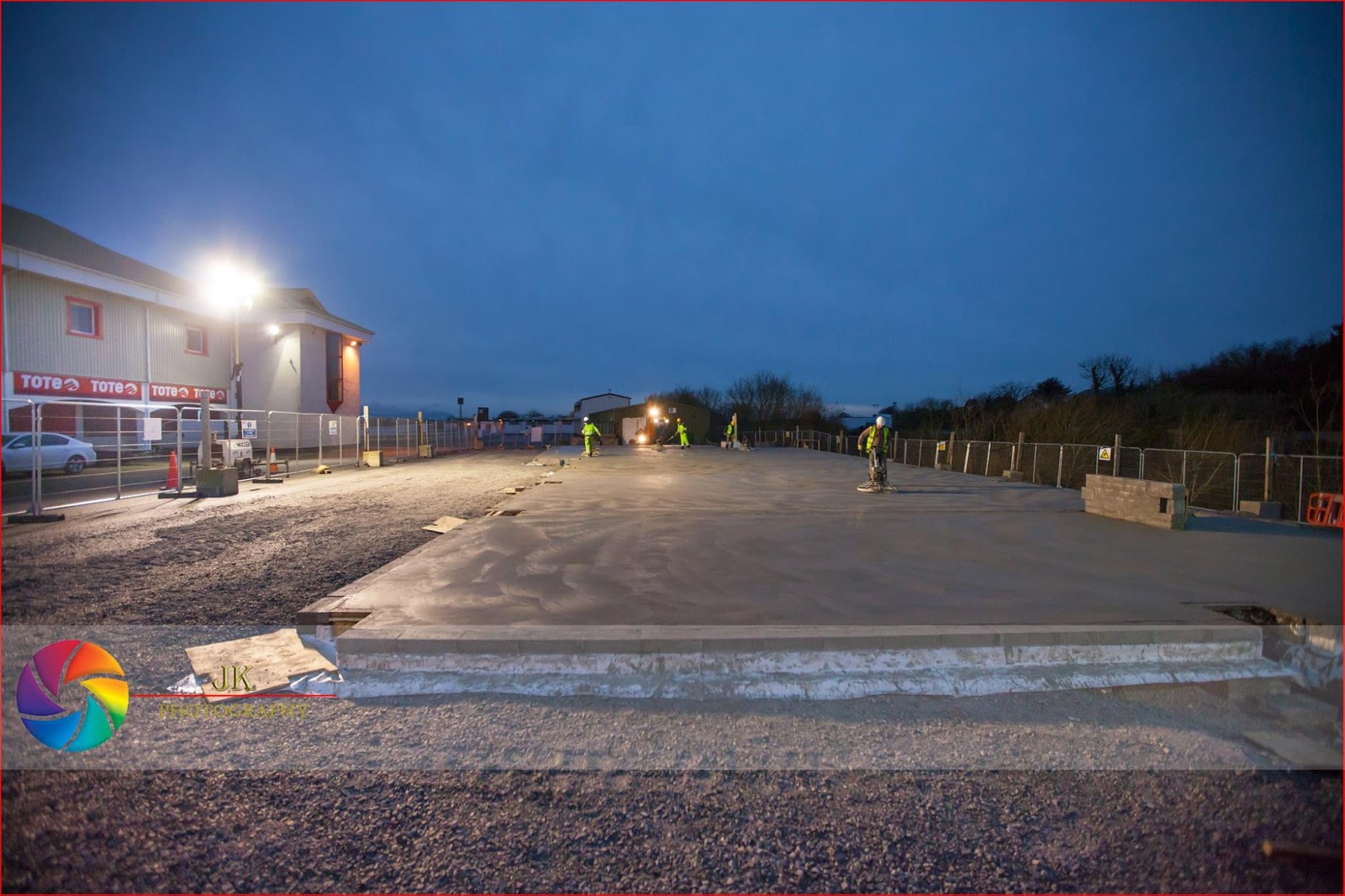 Junior Griffin ponders what Ireland was like when Listowel Badminton Club came into being.

The year of
1908 was still in living memory of the great famine, Ireland’s own holocaust.

There were
several workhouses set up around the Listowel area to cater for the destitute
men, women and children during the famine period and there was at least one
still in use in the early years of the 20th century .  This was
located around the area where the hospital is today; indeed many older people
still refer to the Mass in the hospital church as “the workhouse Mass”.

The workhouse
was under the auspices of the “Listowel Board of Guardians” and the “Kerryman”
report of the childrens Christmas party under that body in 1907 read as
follows;

“The Xmas
treat entertainment which has become a pleasing annual event in the lives of
the little children of the Listowel Union, was carried out in an admirable
manner on the night of New Year’s Day.

Mrs. Foran,
Lady Guardian for Listowel, and vice-chairman of the board, was-as been her
wont since she became a guardian of the poor-the central figure, as well as the
originator of this year’s Xmas tree entertainment, and the manner in which the
various details incidental to such pleasurings were carried out, as well as the
considerateness with which she contrived to give pleasure to the individual
little ones of the Workhouse by her kindly and tasteful distribution of the
good things provided, gives evidence of her thoroughness of head and
heart.  The delight of the little ones was apparent in every nook and
corner, where they could be seen gloating over their presents either singly or
in groups.

The Ladies
who were present were and who assisted in distributing the toys, etc., were-
Miss J. Broderick, Miss Hartnett, Miss Lyons, Miss Nolan, Miss D. Nolan, Miss
McElligott, Miss O’Donnell.  The Matron of the workhouse and the school
mistress were most assiduous in securing comfort for the children.

The band of
the Listowel Total Abstinence Society attended the entertainment, and ably
rendered choice selections of music from 8 to 10 o’clock.  This did much
towards enhancing the pleasure of the little workhouse children, and enough
credit can hardly be given to the band, individually and collectively for their
decent, humane and manly action in their giving to the children of the very
poor, if even for only two short hours in the year, a glimpse into the joyful
and mirthful things of life, which are by forces of circumstances to them
denied, and which to the more fortunate little ones outside the workhouse walls
are matters of daily, perhaps hourly occurrence. It is particularly creditable
that each individual member of the band played his part with much zest and
earnestness for those little waifs and strays of humanity as he could have done
in the palace of a King and for the most select of audiences.  They well
merited the thanks which Mr. Maurice Griffin, editor of the “Kerryman”,
bestowed on them, and the proceedings terminated, leaving everyone with the
pleasurable knowledge that those for whom the treat was inaugurated were for
this one night as happy as if there was never a shadow of a care or sorrow in
this vale of tears.

That was the
Listowel around the time that the Badminton Club was founded, indeed harsh
times for very many. 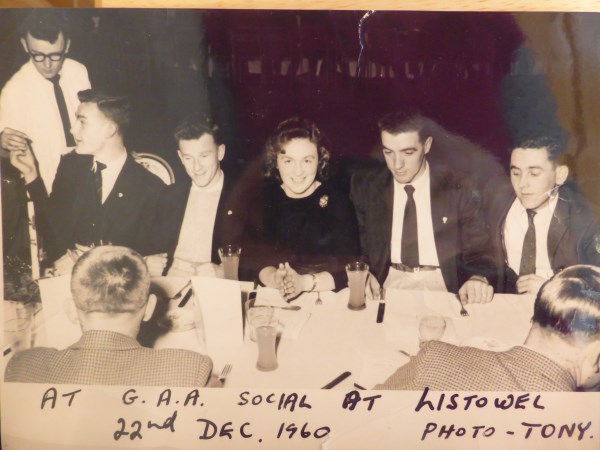 Margaret Dillon / Ward sent me this photo from 1960. It was taken in Walsh’s Ballroom.

Left to Right; Seated is Bryan MacMahon paying the waiter for his orange juice. The waiter might be Paddy Moloney from Charles St.  Next to Bryan is Thomas Ashe, Margaret Dillon, Garda René Farrell (Kilavullen) R.I.P., and Vincent Moloney, Bridge Rd. The man on the left with his back to the camera is Tony Barrett and John Keane is on the right. Of significance is the glasses of minerals on the table and the pioneer pins in the lapels. 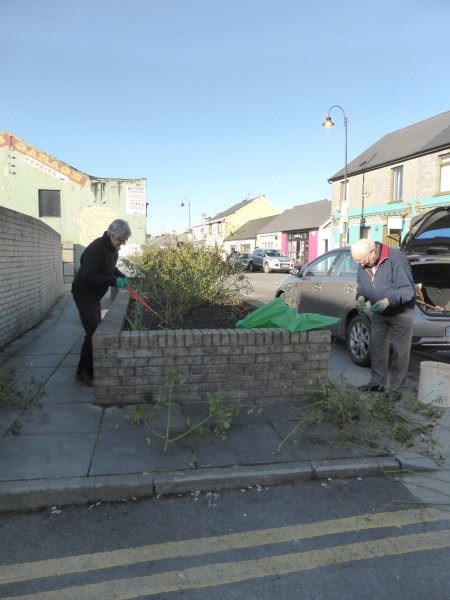 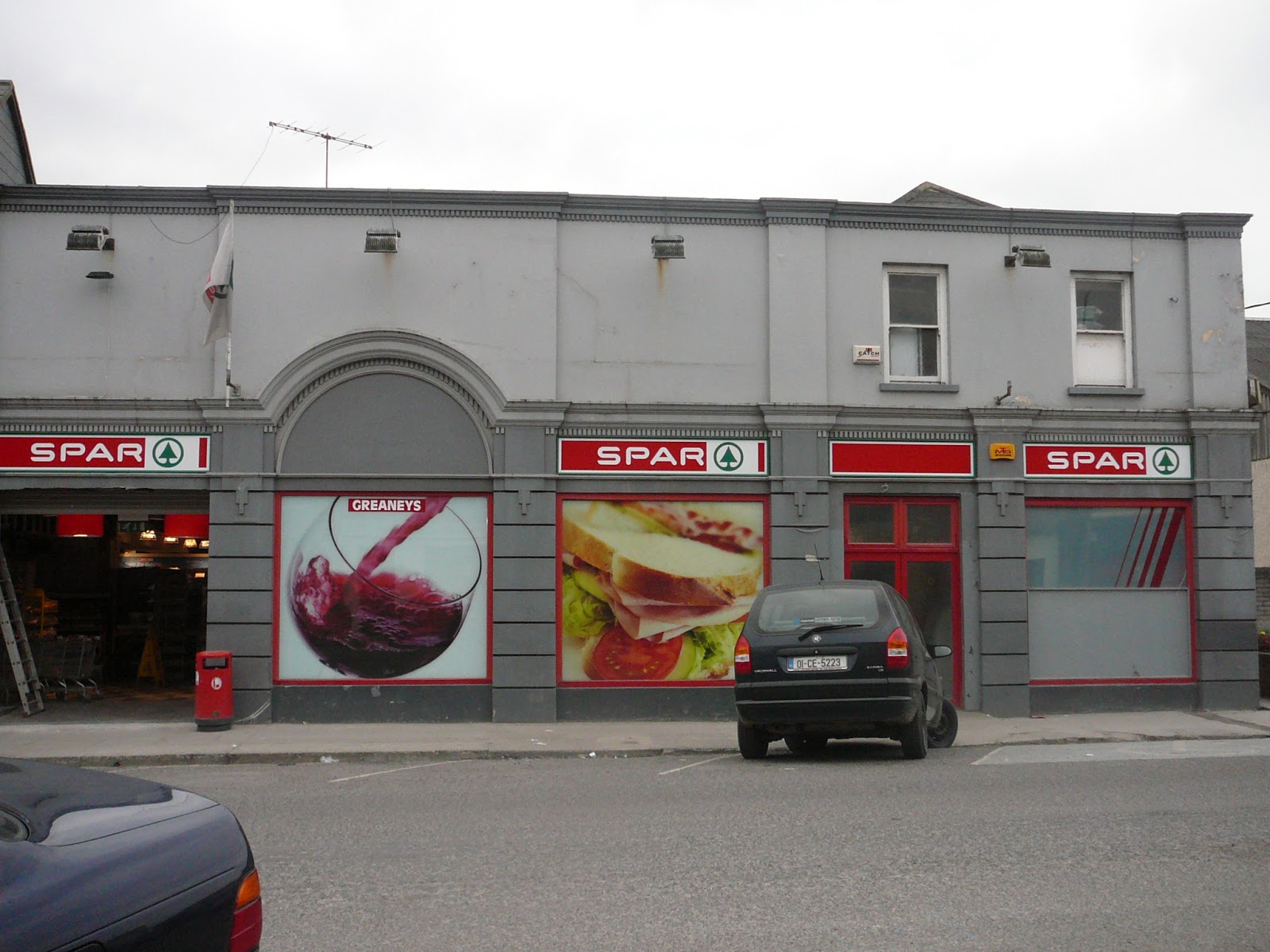 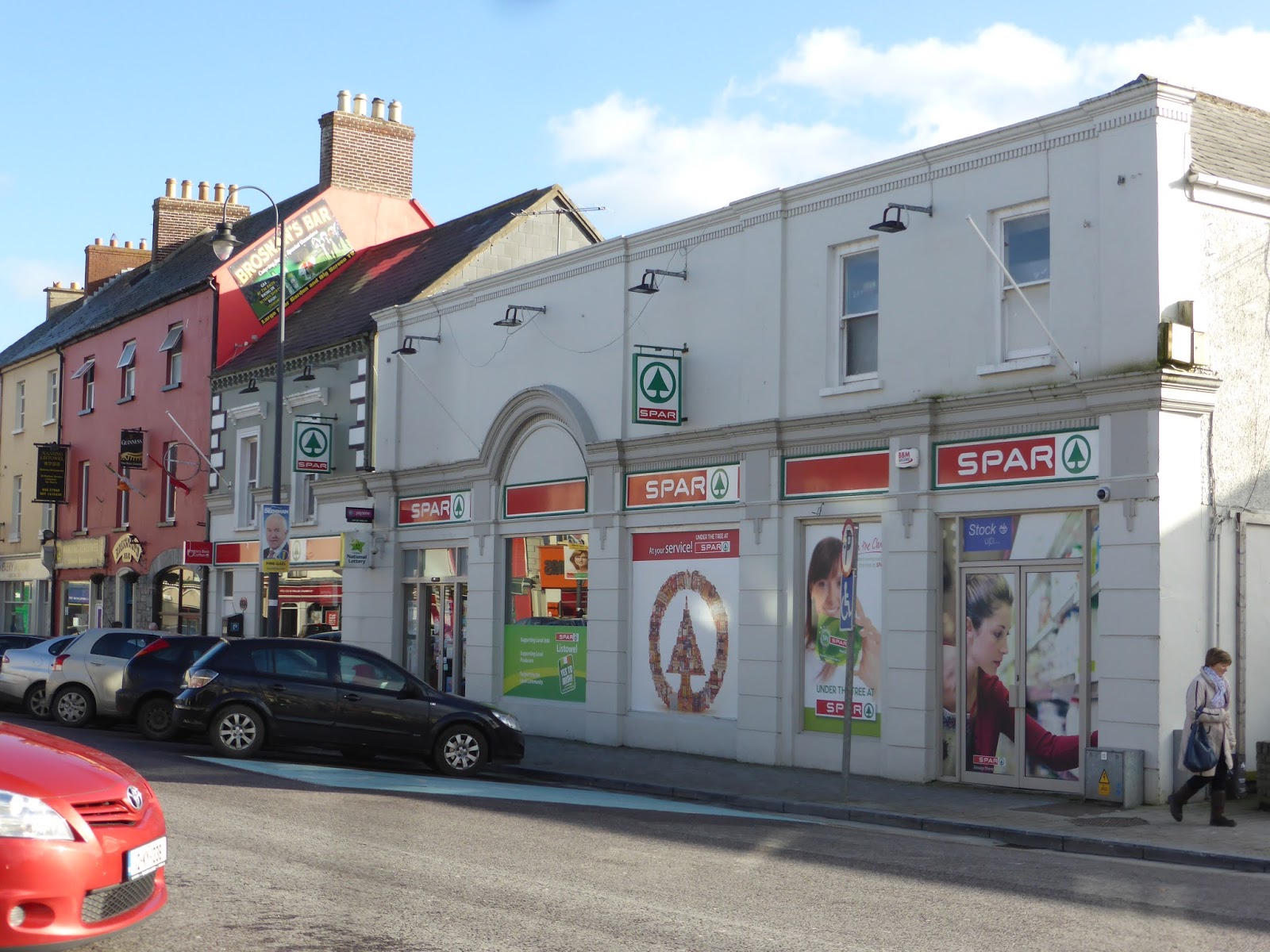