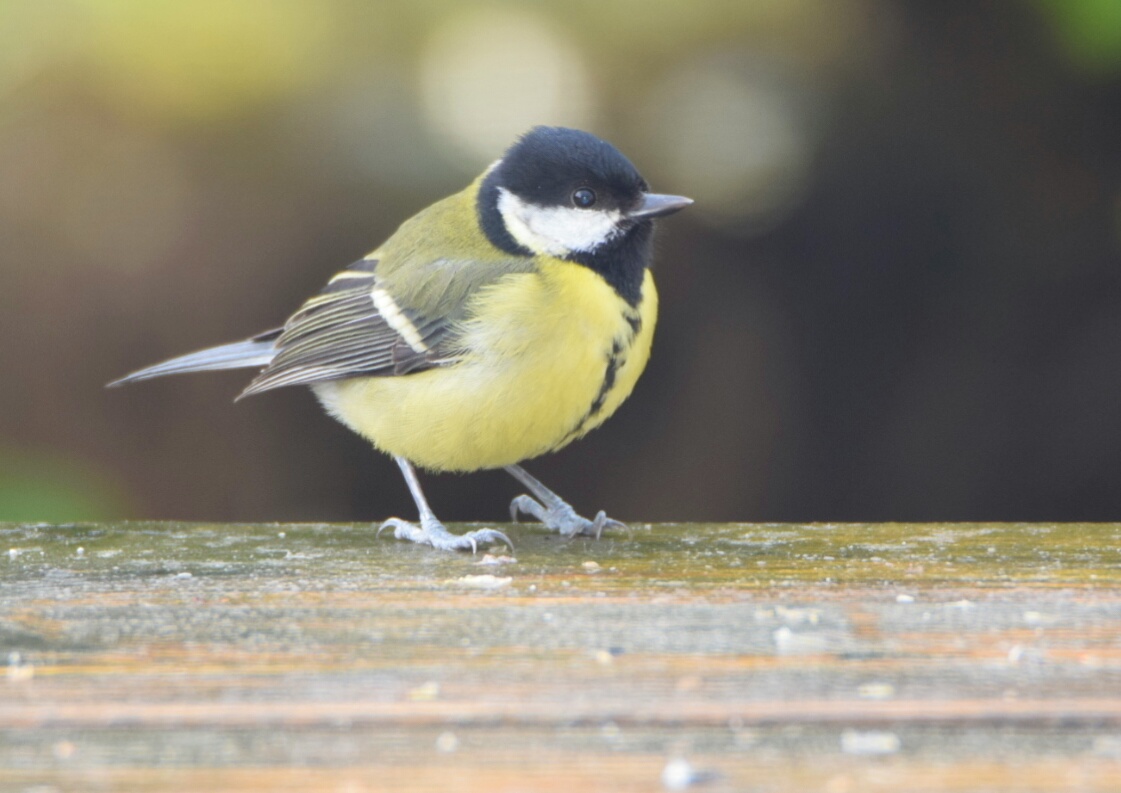 Recently I had the good fortune to attend a great weekend of music, poetry, drama and art in Kanturk, Co. Cork.

One of the more unusual events this year was a display of chainsaw art by Will Fogarty of Fear na Coillte. Will is based in Co. Limerick and from his base there he has created beautiful wooden sculptures using a chainsaw or, more accurately, a few different chainsaws. 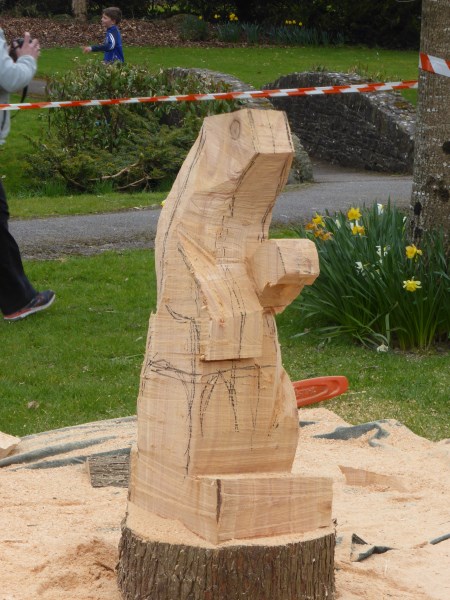 When I arrived in the lovely OBrien Street Park, Will had already started to work. We speculated about what he might be going to create. A fish was the most popular guess. 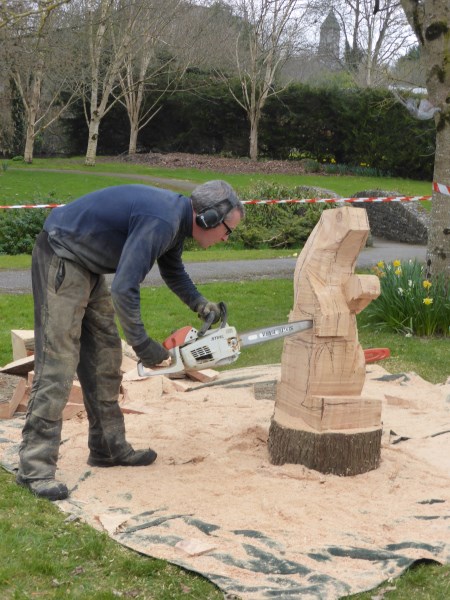 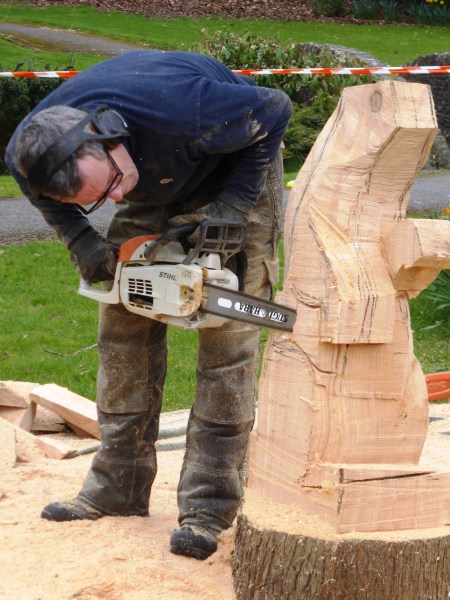 Chainsaw art is a slow process so we left him at it while we repaired to The Vintage for lunch. On our return the sculpture was unmistakably a hare. 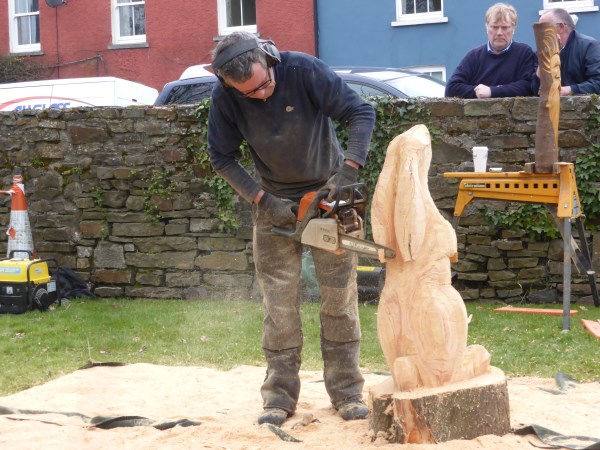 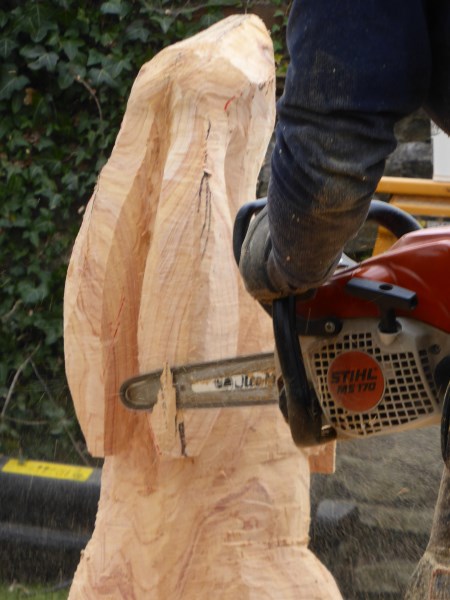 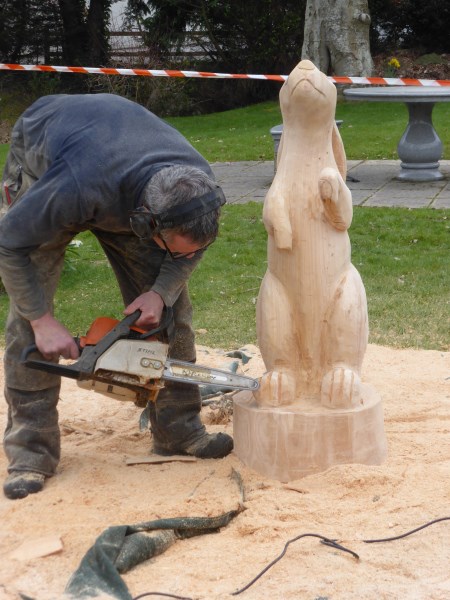 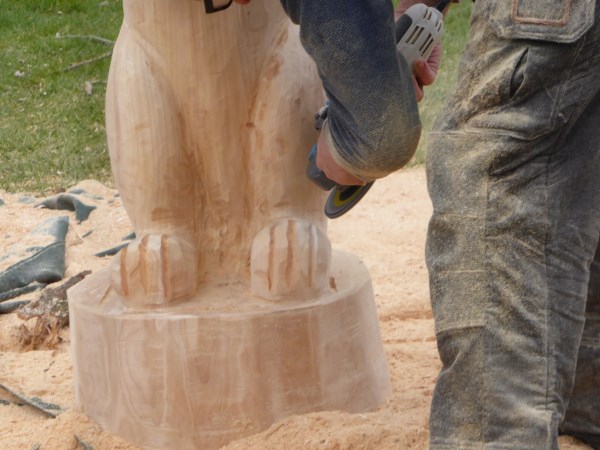 Ears were given definition. The animal was given toes and a few finishing touches involving filing and brushing and hey pesto! a moon gazing hare was born before our very eyes. If you are passing through Kanturk it would be worth your while to pop into the lovely park on your right as you pass through on your way to Mallow. The hare is to be set in concrete and put on display there. 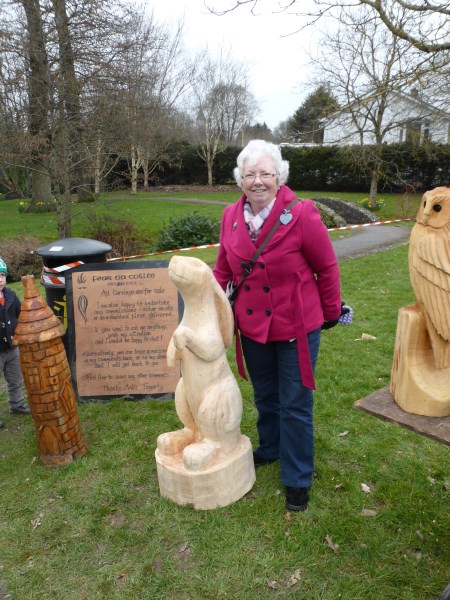 Me with the hare 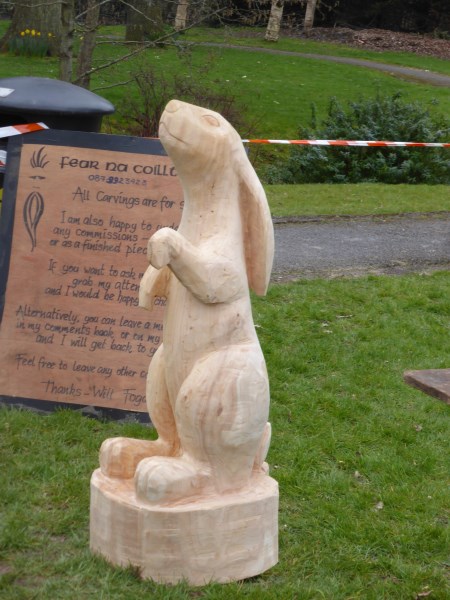 Isn’t he beautiful? His color will darken over time.

LISTOWEL BOARD OF GUARDIANS THURSDAY

(“Abridged from the Tralee Chronicle.)

The chair at the opening of the proceedings was occupied by Maurice
Leonard, Esq., deputy vice chairman, but was subsequently filled by
Capt. HOME, the Chairman of the Board.

Mr. Lynch, P.L.C., and Mr. R. E. Duncan, who has succeeded Mr.
Robinson, as Poor Law Inspector, were in attendance.

It appeared that there had been in the fever hospital on last Saturday
no less than 106, and 37 deaths from fever and dysentery. The deaths
this week were seven. The average of deaths, for some
weeks—principally from dysentery—was as high as five a day. The
following report of the Medical Officer was read:—

The Medical Officer begs to call the attention of the Guardians to the
still increasing amount of mortality in the workhouse, an event which
he foresaw some weeks ago, and as a likely means of preventing which
he then recommended a change in the dietary, not then acted upon. He
again wished to bring under the consideration of the Guardians, as
well for the sake of ultimate economy as common humanity, the
importance, during the present epidemic of dysentery of the
substitution of soup, such as that already recommended in December 20,
1849; for what is now in use amongst the paupers, and which consists
almost exclusively of ingredients of a decidedly laxative nature, and
consequently per-disposing to dysentery. Independently of atmospheric
influence, and the foregoing cause, the medical officer cannot but
consider that other causes operate in the development of the present
prevailing diseases, and among the most likely he would enumerate the
intense coldness of the weather, scarcity of fuel, insufficiency of
clothing, and the overcrowded state of every part of the house
appropriated to the sick. The correction of some of those causes the
medical officer respectfully submits is within the power of the
Guardians.

Mr. Leonard—This is a matter of vast importance. Mr. Robinson, in his
place here, induced us to adopt his receipt for soup, and we were thus
led to throw overboard the doctor’s recommendation; and ever since
those deaths have been taking place.

Mr. Lynch—I do not apprehend that it is in consequence of the soup,
which is what is now known as the Roscrea soup. It is used in
Limerick, where we have 2,800 inmates, and there are not half so many
deaths there in a week as here. On going into your hospital, a most
horrible sight presented itself to my notice. I am only surprised the
deaths were more numerous. But, bad as the state of things was, I was
told by the matron, the master and the Catholic clergymen, that there
was a great improvement since yesterday. There were ten children in
one bed, and eleven children in another, suffering under severe
dysentery—actually dying. In the whole course of my experience of
workhouses, I never saw anything like that before. Your hospital is in
a shameful state. It is full of dirt from top to bottom. There was no
straw, no change of linen. I am only surprised that the deaths are not
double.

The doctor told me that there were in the hospital of the
workhouse no less than 222, though it was only calculated to contain
140. But that does not account for ten and eleven in a bed. But he
told me that there was no straw put in the bed, where there were five
children sleeping heads down, and five heads up—and all in a dying
state Surely, you would not put ten children in a healthy state into
the same bed. Several beds had eight, some five, and none less than
four children. Mr. W. Sandes—This literally amounts to a mortality
test. Mr. Lynch—Then there they are left without breakfast till one
o’clock, while there is no less, I am told, than 23 per cent, water in
the milk. Mr. George Sandes’ report, as the acting member of the
Visiting Committee, and the report of the Master described the
infirmary as in every filthy state. The Rev. Mr. Mahony, the Roman
Catholic Chaplain, came before the Board, and said—I went into the
infirmary half an hour ego, and I found the sick paupers without
having had their breakfasts, at half-past one. I told the Master, and
be said he thought that a man named Griffin, who acts under him, had
supplied them with breakfast. He sent for the nurse tender, and she
said that Griffin had stated as his reason—(here we were interrupted,
and lost the remainder of the sentence). The paupers were lying on
their beds without a drop of drink till half-past one.— There have
been forty-five deaths for the last fortnight, and eight yesterday.
The eight days before that, there were thirty-one deaths. In my
parish, where the population in 1841 was 7,072, there were not four
deaths during that time. I do not make this statement in the way of a
complaint against the officers; but I feeI I would not be doing my
duty if I did not state this much—(hear, hear). I believe the Master
was not to blame, because he thought this man did his duty.

(Life in Listowel Workhouse in 1850 was truly awful. The image of 10 dying children in the same bed without even straw for a mattress is beyond appalling) 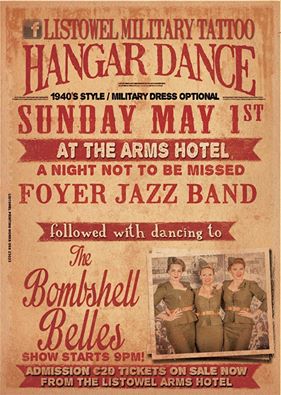 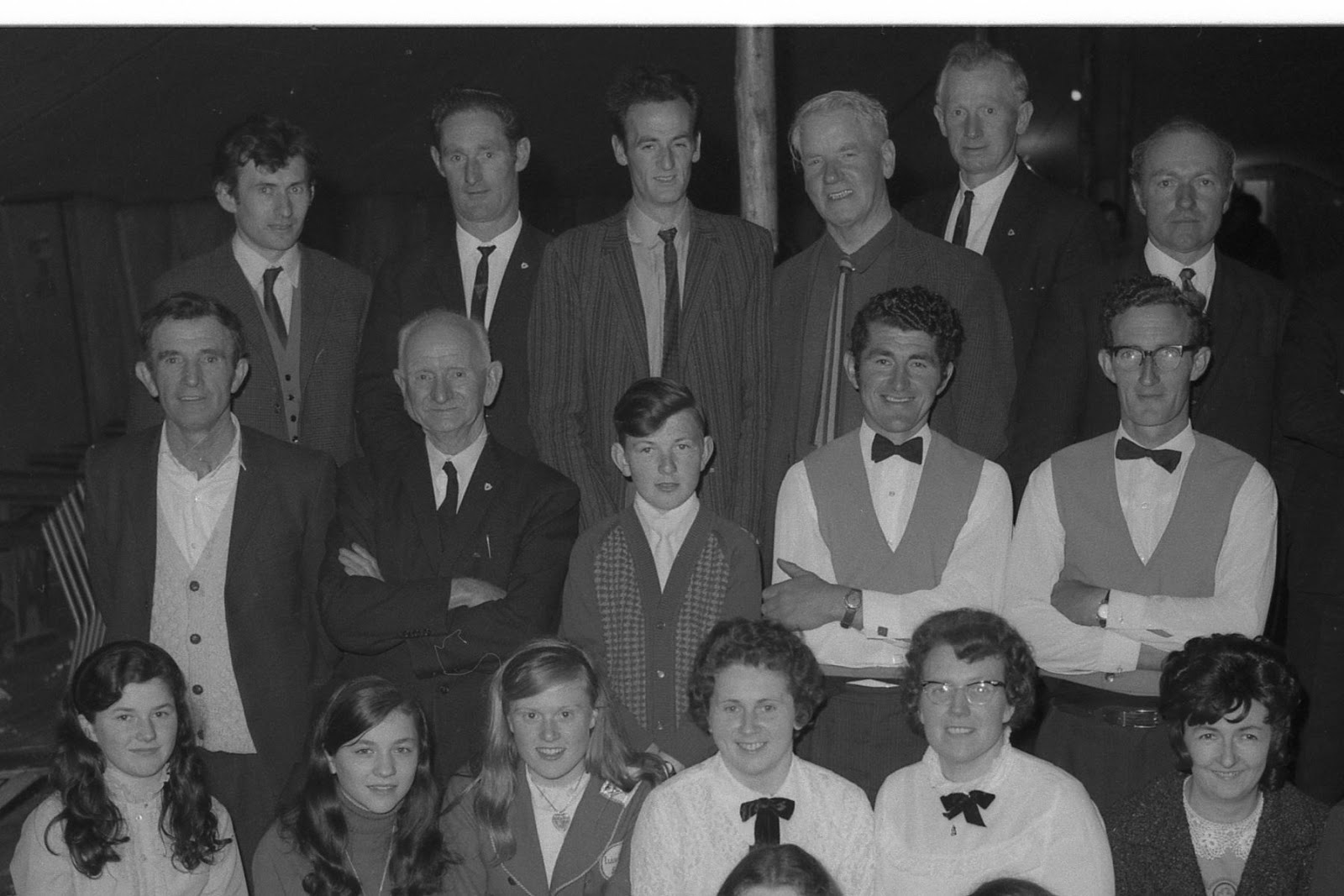 This is a photo of the performers at a show organized by Dan Keane sometime in the 1970s. Betty Stack provided the names. Her copy of the picture had a few more people so I hope I have the names right. If anyone has a scanned copy of the full picture, I’d be delighted to post it.

The copy of the picture I got has the front row missing which is a pity because in it are Timmy Brosnan, Peggy Sweeney and Dan Keane