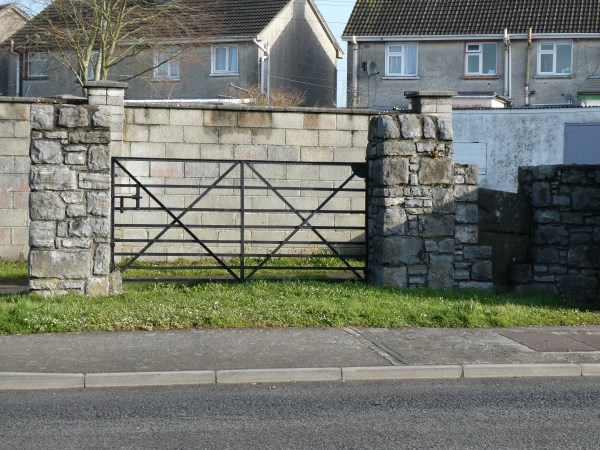 This gate is a kind of folly. You can see it on the John B. Keane Road near the Ballygologue Crossroads. It is beside a back lane into Ballygologue. It serves no purpose except to remind us that this was once the countryside and this was a gate into a field. 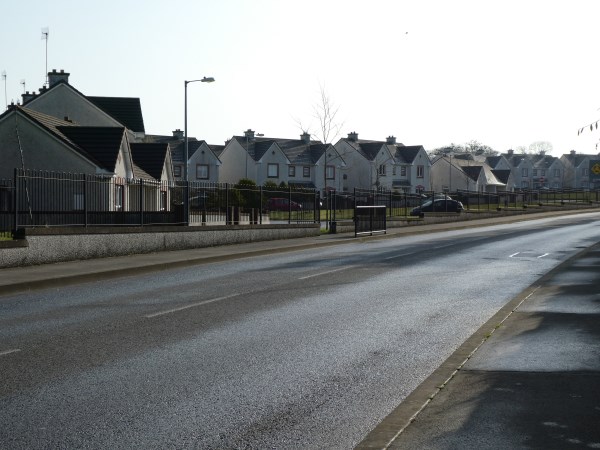 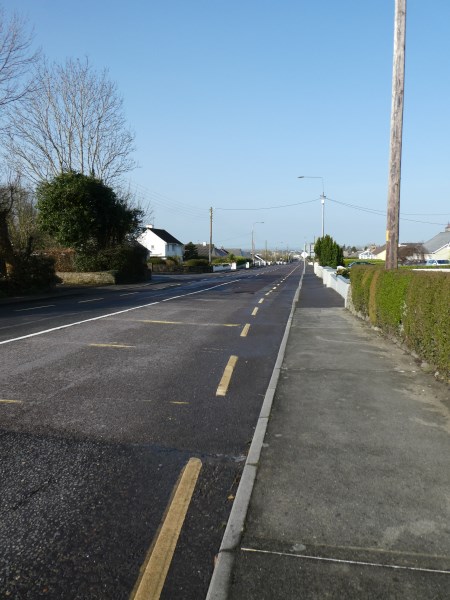 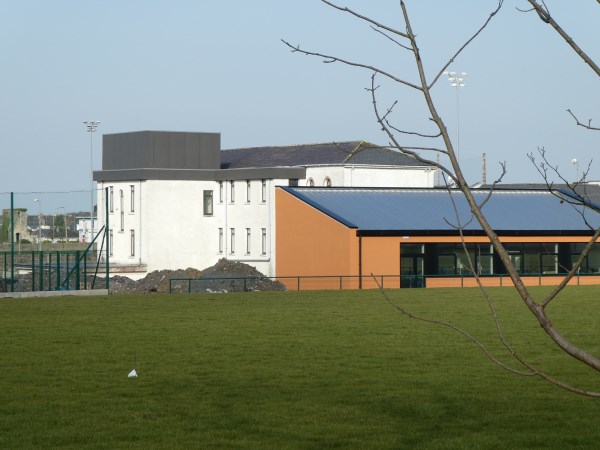 This is the newly built extension to St. Michael’s College. It’s quiet and deserted now but will see teenage boys enjoy its facilities in the not too distant future. 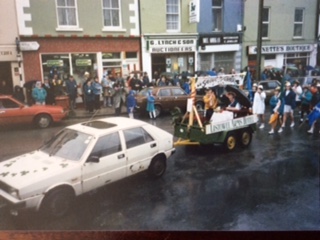 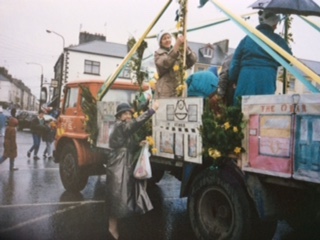 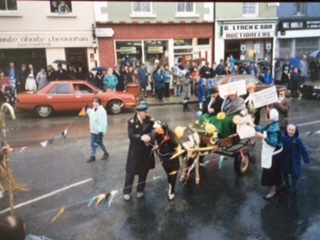 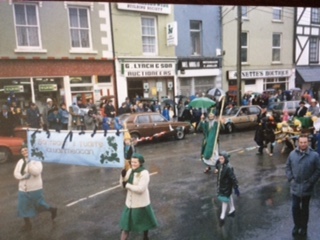 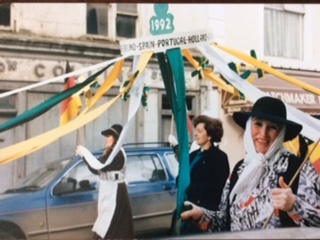 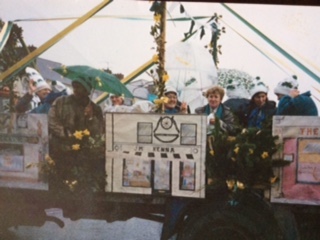 The Healing Hand of Nature 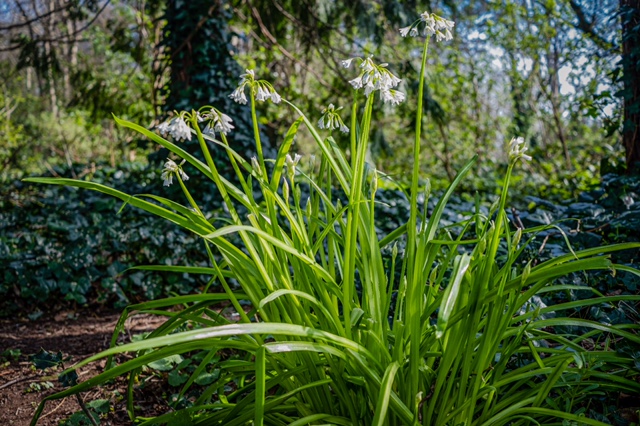 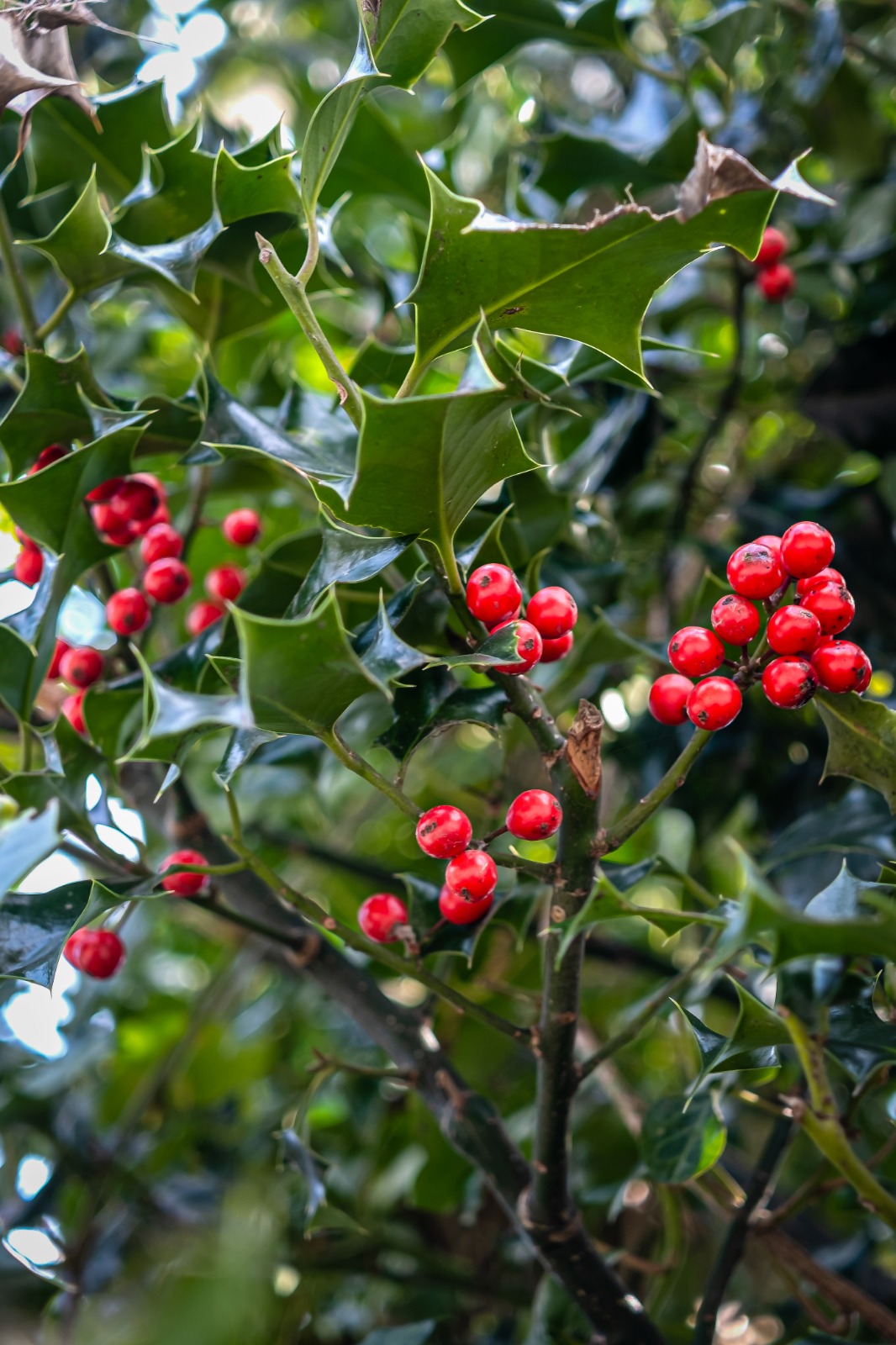 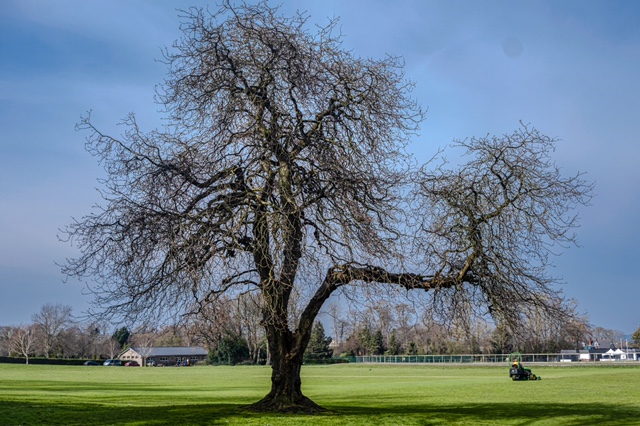 A Poem from John McGrath


My mother wears her bitterness

Turf-smoke curls about her smoke-grey hair.’Your father had two left feet,’ she spits
Grasping the tongs with blue-veined fingers,
She pokes the fire to coax the dying flames.
‘I should have married a dancer,’ she sighs
And now her eyes are filled
With the hornpipes of memory
As the ghosts of a thousand hopefuls
Swirl her round the room.
‘O, how we loved to dance.’
We lose her for a moment
In the ashes of lost chances,
Until once more the fading embers flicker.
‘We could have had our pick,
Kathleen and me.’
Twin heartbreakers in pleated dresses.
They left the dancers standing,
Dashing down Oxford Road
For the last train home,
Missing the last waltz. 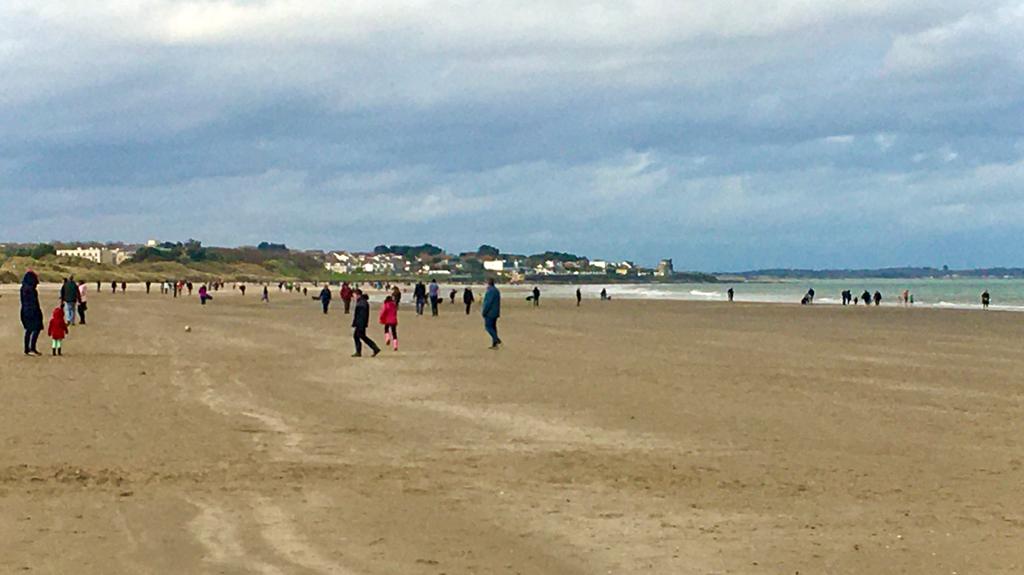 Remembering a St. Louis Pastor with a Listowel Connection

As you were looking for Archival material for the Listowel Connection  I am sending you an article on the Rev P.atrick J O.Connor who was a first cousin of my Grandfather Dr Michael O’Connor. late of The Square Listowel.

Rev  P. J. O’Connor, Pastor of St. James Church, born at Coolkera Listowel, County Kerry, Ireland in the parish of Ballybunion January 1, 1883 was the , son of Cornelius O’Connor and Mary nee Corridan. Baptized at the Chapel Ballydonoghue January 3, 1883, confirmed there July 1895, attended the National School, at Coolard and later Tullamore, entered St. Michael’s College, Listowel, August 23, 1897. the ecclesiastical college, Carlow College Sept. 3, 1901, ordained a priest June 9, 1907, said his first mass at the Poor House Chapel Listowel June 11 for the inmates in the presence of a few relatives and Sisters of Mercy.

Coming to the United States in the year of his ordination he was appointed to St. Edward’s parish in St. Louis as an assistant pastor. After five years he was transferred to the St. James parish where he spent the remainder of his life, the years from his appointment until 1918 an assistant pastor, and from 1918 until 1929 as administrator of the parish. He was appointed pastor on Nov. 14, 1929. 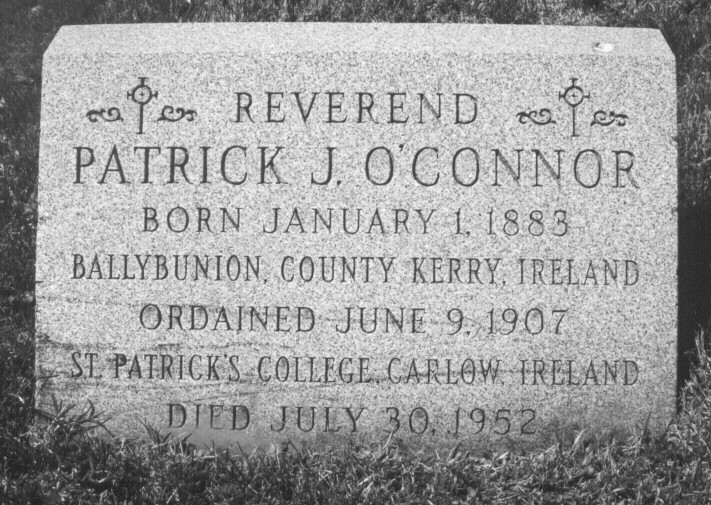 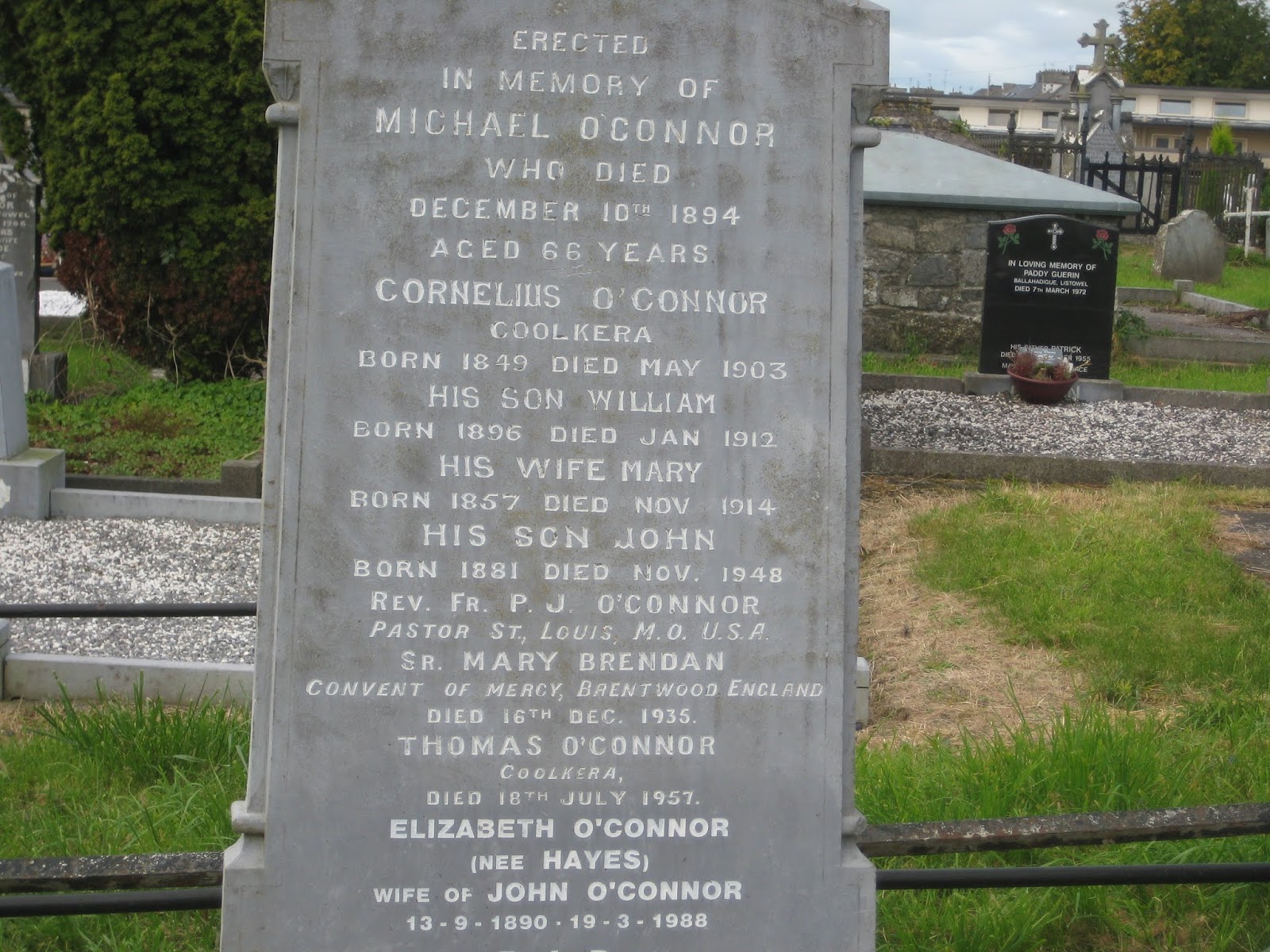 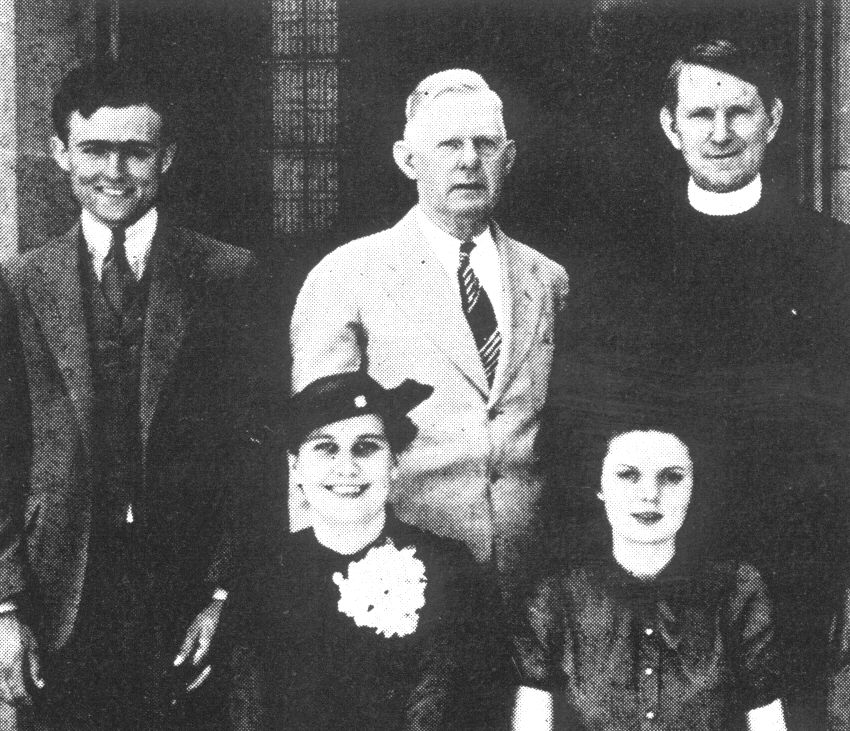 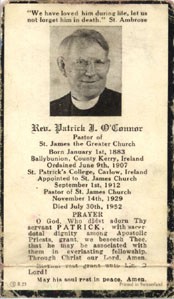 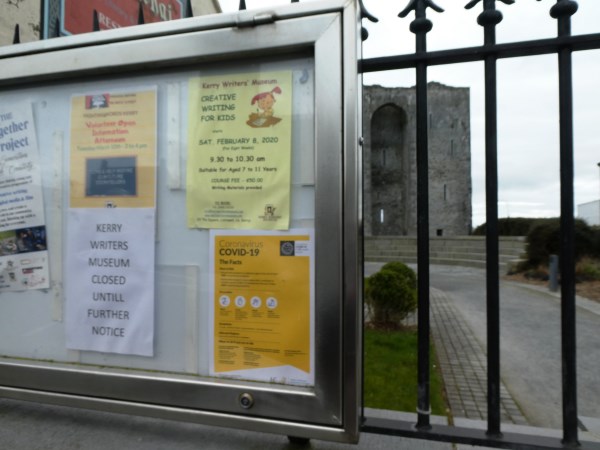 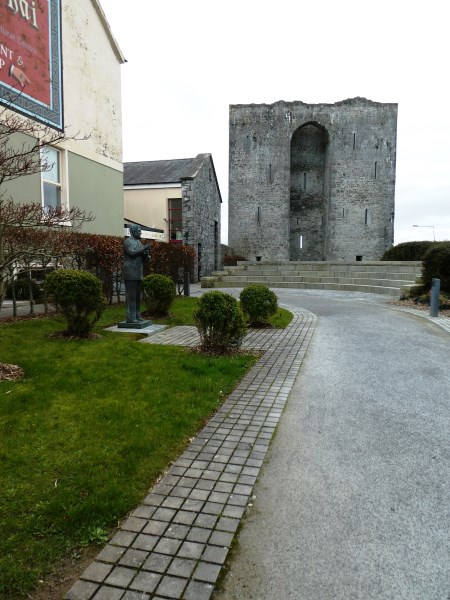 Some more treasures shared with us by Máire MacMahon, Listowel ICA in St. Patrick’s Day parades 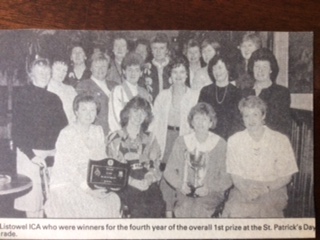 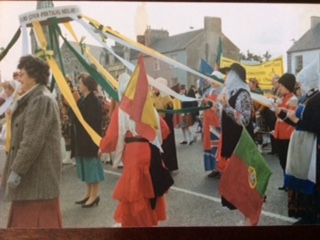 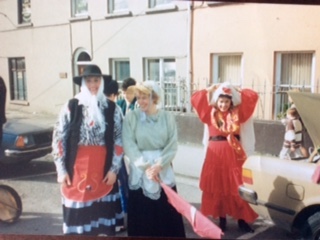 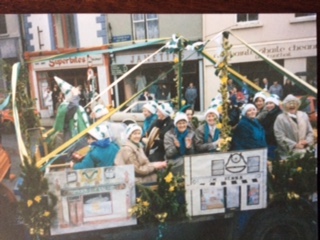 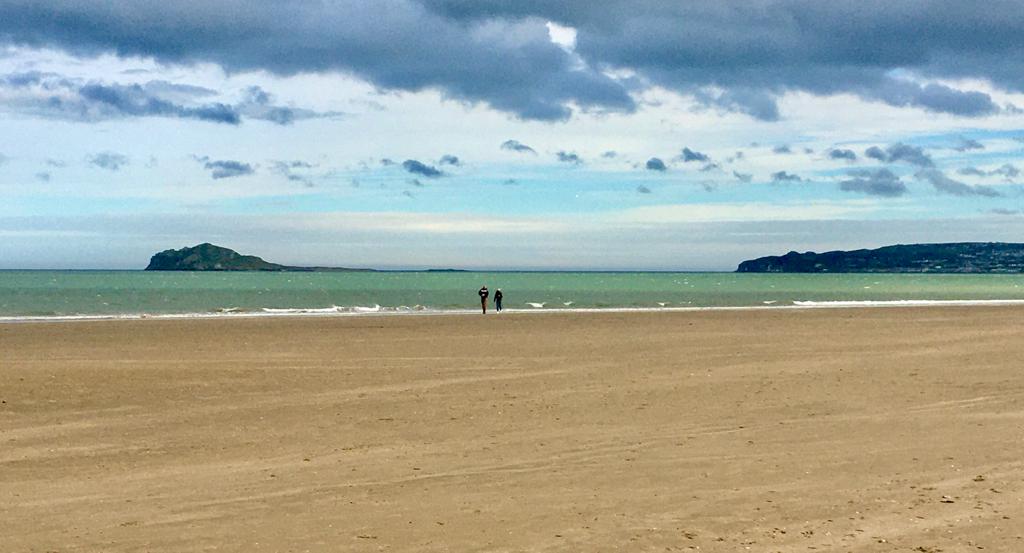 On Saturday morning that Cork Legend Niall Toibin unveiled a statue to the late John B.Keane in the small square.

The annual Literary and Historical tour, starting at 2 O’clock, took in Gortaglanna, Knockanure, Moyvane and Lenamore.  Gortaglanna was the scene of a brutal killing by the Black-and-Tans. (Octogenarian songwriter Dan Keane, has written a new version of The Valley of Knocknanure to commemorate the slaughter.)  Moyvane was the birthplace of poet, philosopher and mystic, John Moriarty, whose funeral was on the day of the tour.

Bi-location would have come in handy because An Audience with Melvyn Bragg got under way in the Listowel arms at 2.30, followed by a reading by Liam Browne and Mia Gallagher at 4 O’ clock.

And it would have meant very tight scheduling if one tried to fit in a meeting with author Irvine Welsh at 5 O’clock. His first novel Trainspotting was described as, “ the fastest-selling and most shoplifted novel in British publishing history”.

I missed the lecture by Alain de Botton in Saint John’s Theatre at 6 30. and later Frank Pig says Hello because I was making preparations.

Wait ‘til I tell you.

I have told you before, about when I first became interested in storytelling. It was when my, visually impaired, mother was given a radio by the National Council For The Blind in 1959. Once a week, on The Rambling House, the Seanachai of all Seanachais, Eamon Kelly came into our humble kitchen.

Occasionally, in later years, people who didn’t know any better, would describe me as a storyteller. It must have gone to my head because this year I submitted a story to the International Storytelling Competition dedicated to the memory of the above-mentioned Eamon Kelly.

Now, no self respecting Seanachai (even one as amateur as yours truly) would be seen without the traditional garb of the Irish storyteller. It’s not the sort of clobber you can purchase in Saville Row or from sartorial purveyors on the high street.

Being a man of modest means, who was doing his small bit to keep the art of storytelling alive, I thought that some native drapery merchant would sponsor my outfit. I approached many but I am sorry to say that not one supplier on the Island of Saints and Scholars donated as much as a bootlace. (I even contacted the County Secretary of the GAA in Wicklow asking for a shirt in the county colours but I wasn’t even granted the courtesy of a refusal. I was ignored.)  But, a number of offshore benefactors came to the rescue. 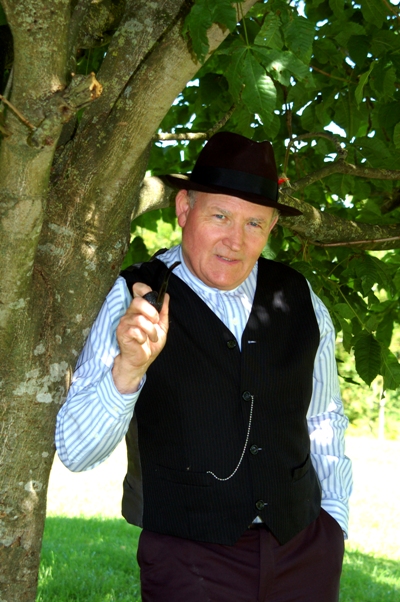 Because of the nature of my act a number of shirt changes was necessary, but not just any shirt. It had to be a Grandad shirt. Those garments were very kindly sponsored by;

And of course the waistcoat.

A collector of waistcoats who wants to be known only as “The Waistcoatman” (www.thewaistcoatman.org.uk) donated a period waistcoat.

In the past no true Irishman would be seen bareheaded unless he was in bed or in the Church (some of them slept in both places). As the aforementioned Eamon Kelly used to say, “There was respect for the brain then”. The necessary Fedora was provided by Treasured Parts (www.treasuredparts.co.uk) The top half of me was now period.

Men of my father’s era wore a two-and-a-half-inch wide leather belt with a rectangular brass buckle. In the Beano and the Dandy misbehaving juniors were punished with the slipper but in rural Ireland the male parent’s belt was the “correction tool” of choice. My father was a kind man and (apart from the occasional “larrup” on the backs of the legs for severe mischief) I escaped. So, as a tribute to Tim Lennon (no mean story teller himself) long gone to his reward, I decided I would wear an appropriate leather belt on stage. But where would I get one? Susan McKenzie, Director of The Inner Bailey, in Kentucky “gave me a belt”. She can be found at www.theinnerbailey.com

On Sunday I missed a reading by Gisele Scanlon, “Allergic to Beckett”, a  reading by Giles Foden and “A Treasury of Poets”.

Those omissions weren’t through laziness or apathy; I couldn’t miss the Dan Keane children’s poetry event in Finuge This is a poetry competition for children where the next generation of literati are judged by thecritical eye and ear of Dan who was born in 1919. There had been children’s events all week but to my mind this was the highlight. It was an open competition but not surprisingly Kerry schools shone; particularly pupils from Dromclough National School. There is a healthy crop of young poets in the Kingdom.

On Monday morning as “the road to Abbeyfeale”  brought me further from the culture capital, I hoped that the Great Creator would leave me here to repeat the experience in 2008.

Máire MacMahon sent us these photos from yesteryears 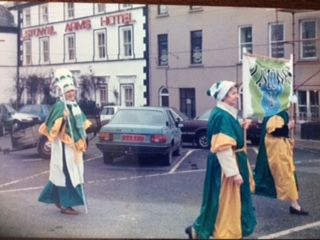 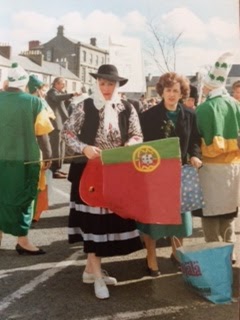 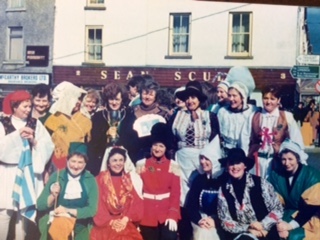 Sunday last, Mr. Griffith laid the foundation stone of the new bridge, over the river Feale, which is to be called Wellesley Bridge, in commemoration of the Viceroyship of his present Excellency, to whom the public are solely indebted for so many important works now going on in that hitherto neglected part of the Country. The three first stones that were laid weighed over seven tons. A quantity of whisky was poured on them when they were put down.

The public will be gratified to learn, that the line of Road between Limerick and Tralee, part of which was executed at the private expense of Mr. Rice, of Mount Trenchard, is nearly complete, and that a Mail Coach will be started in August, to run between Limerick and Tralee.- Mr. Rice will be repaid his expenses by the Grand Jury. It is curious to remark, that Mr. Rice excepted a piece of road for 200l. for which a sum of 2,000l. was demanded for by contract.