The Kildare branch of the family love Listowel. Here are Tony and Mary McKenna from Newbridge enjoying lunch in Lizzy’s. Mary was excited to be photographed with celebrity chef, Lizzy Lyons and to meet her in the flesh.

This lovely couple were celebrating 42 years since they first met when Mary joined Bord na Mona in Newbridge and Tony was the first person she met on her first day.

Friends, Danny Hannon, Joe Murphy and Jed Chute enjoy a cup of coffee and a natter in Lynch’s, Main Street.

Memories of a Pres. Operetta

How about this for a trip down memory lane?

This community market is just finding its feet with new stalls being added every week. It is a great way to spend a Saturday morning. It’s in the car park behind the community centre and it starts at 10.00a.m.

I only photographed a small few of the very diverse stalls.

The streetscape of Church Street is changing rapidly. Another welcome new colourful addition is this charming coffee shop with a few extra delights in stock as well

Cora Creed is the vice president of Digital Supply Chain Management at Universal Music Group in New York. Originally from Listowel, Co. Kerry, she came to the U.S. on a Donnelly Visa and “has never looked back.” She has almost 20 years experience and expertise in business transformation in the digital space, and has worked with leading brands like Napster, Sony, and EMI.

Cora believes that “Despite being one of the smallest nations on earth, [the Irish] have left an indelible mark,” as many aspects of Irish culture “have propagated to the four corners of the world.” She is also struck by the “incredible goodwill towards the Irish” that she finds on her travels abroad.

Cora is also a founding member and sits on the board of directors of Swazi Legacy, a nonprofit organization that assists marginalized and homeless young people in Swaziland. She will help lead a team from New York and Ireland to Swaziland in June to work with orphans at Manzini Youth Center.

Cora is married to Thomas Creed, also from Kerry and still very much considers Kerry home. Her mother Kathleen is from Kerry but now lives in London, and her father, Brendan, was from Dublin.

A Will, A Toilet, A Memory and a Request

I took a look inside for you. It’s such an improvement on the old toilets. Our visitors will be delighted.

The old story about Irishmen and the great regard they have for their mothers is fully proven in this newspaper report from a U.S. newspaper, The Times-Picayune, New Orleans, Louisiana, of 12.2.1842. This exiled Irishman was prepared to stretch mathematics beyond all possibility in order to look after his mother in Ireland – even before the terrible Famine struck!

“A Job for Judge Bermudez.  An Irishman who died recently in this city made his last will and testament after this fashion: – “I order and direct that one half of the property of which I am now possessed – whether in moveable property, real estate, or otherwise – be given to my loving wife, one half to my only son, William, and the other half to my mother, in Ireland.”

Now the difficulty with his executors is this: after giving one half of the property to his loving wife, and another half to his only son, they are at a loss to scrape up a third half, the proceeds of which is to go to his mother, in Ireland!  Here is a knotty case for the Court of Probates.”

One presumes that his loving wife and son would settle for one-third apiece!

In August 2012 this group met and knitted and nattered in Scribes of Church St. Much has changed since. Sad it’s over but glad it happened.

One of Listowel’s Living Legends

Look who I met when I was out for a walk in Listowel Town Square on Sunday afternoon, May 30 2021. None other than a man I greatly admire, Danny Hannon, looking fit and dapper, was returning home after a visit to the church.

In 1990 a St. Michael’s Listowel football team played CBS Dingle in the final of The Dunloe Cup. The game was recorded but we don’t know by whom. Searches in the two schools and the home of the losing trainer proved fruitless. Maybe, just maybe, someone out there has a copy of that precious recording. John O’Flaherty tells me that games were sometimes recorded by pupils, some with commentary. We’d welcome a loan in any format.

Casa Mia, Jed and Danny, Donal Ryan and The Races back in the Day In the 19th century they had a very poor view of the senior years.

What do you make of the following item, published in 1838 and  from, I believe, a U.S. origin?

“Periods of Human Life, from the Wexford Conservative, 1 August 1838.

Caducity– (Senility) From 78 to 84. The age of distrust, vain-boasting, unfeelingness, suspicion.

Age of Favor – From 81 to 91. The age of insensibility, love of flattery, of attention and indulgence.

Age of Wonder– From 92 to 98. The age of indifference and love of praise.

‘Caducity’ I never heard of, but on checking online, it refers to senility, dotage, perishable…

Not sure that the future is all that rosy- not much to look forward to in the above list, apart from the ‘last sigh.’ I’m really enjoying this one.

Listowel Races in the Papers

Eileen Sheridan came across these old 1977 newspaper photos and and Dave O’Sullivan unearthed a great Kieran OShea article from the same paper. Brent Geese at Sunset in Beale Tom Fitzgerald took this photo of the Listowel Writers Week gang at  a craftshop Christmas event; The late Eileen Hannon with Danny and Noreen O’Connell at the same event. Hose and Half Hose

The question of hosiery came up last week when we were discussing Duhallow Knitwear and how it was always referred to in my home town as The Hosiery.

Our friend, Nicholas, did a bit of research on the internet and this is what he found.

I  believe it all started with mens’ wear – (late 13c., “covering of woven cloth or leather for the lower part of the leg, with or without feet,” from late Old English ‘hosa’ “covering for the leg”) and developed into basically everything that covered the leg from the knee to the ankle.

At first, the hoses on the two legs were separate pieces of material- a solution was necessary to preserve modesty, so a cloth codpiece was invented to cover the gap in material.  this was amended to metal to cope with  a certain vulnerability to injury. In the 400s,  following a widespread outbreak of what we would now call (to spare blushes) a ‘social disease,’ the codpiece was essential to cover the effects and visible signs  of the disease and the manifold ‘medicines’ applied to combat it. I believe Gucci revived the codpiece in modern times as a fashion statement rather, I suppose, than as a ‘nod’ to the more indelicate associations.  And it was an unexpected motif in the Spring 2020 menswear collection by American designer Thom Browne, shown in Paris in 2019. Like everything else connected with male vanity, it is believed that codpieces were much aggrandized and exaggerated in size by some…. Henry the V111 was one who did this, as depicted in Holbien Junior’s portrait. I presume Kings, depending on male heirs to keep the line going, would at least, have to appear capable of doing so (or be prepared to behead his Queens and kick out the Pope).

There is a contemporary male-worn item commonly used contact sports, and in ballet: the ‘jockstrap.’

It is time to call a halt on this somewhat  distasteful topic. It may not all be suitable for your Blog. In any case, you have the final editorial call and you may disregard any or all of the above as you wish.

During lockdown we are all taking time to observe Nature all around us. Part of that observation for a photographer is also capturing the moment in a snap.

Tom Fitzgerald was fascinated by this magpie who swopped down to take away the remains of his piazza. 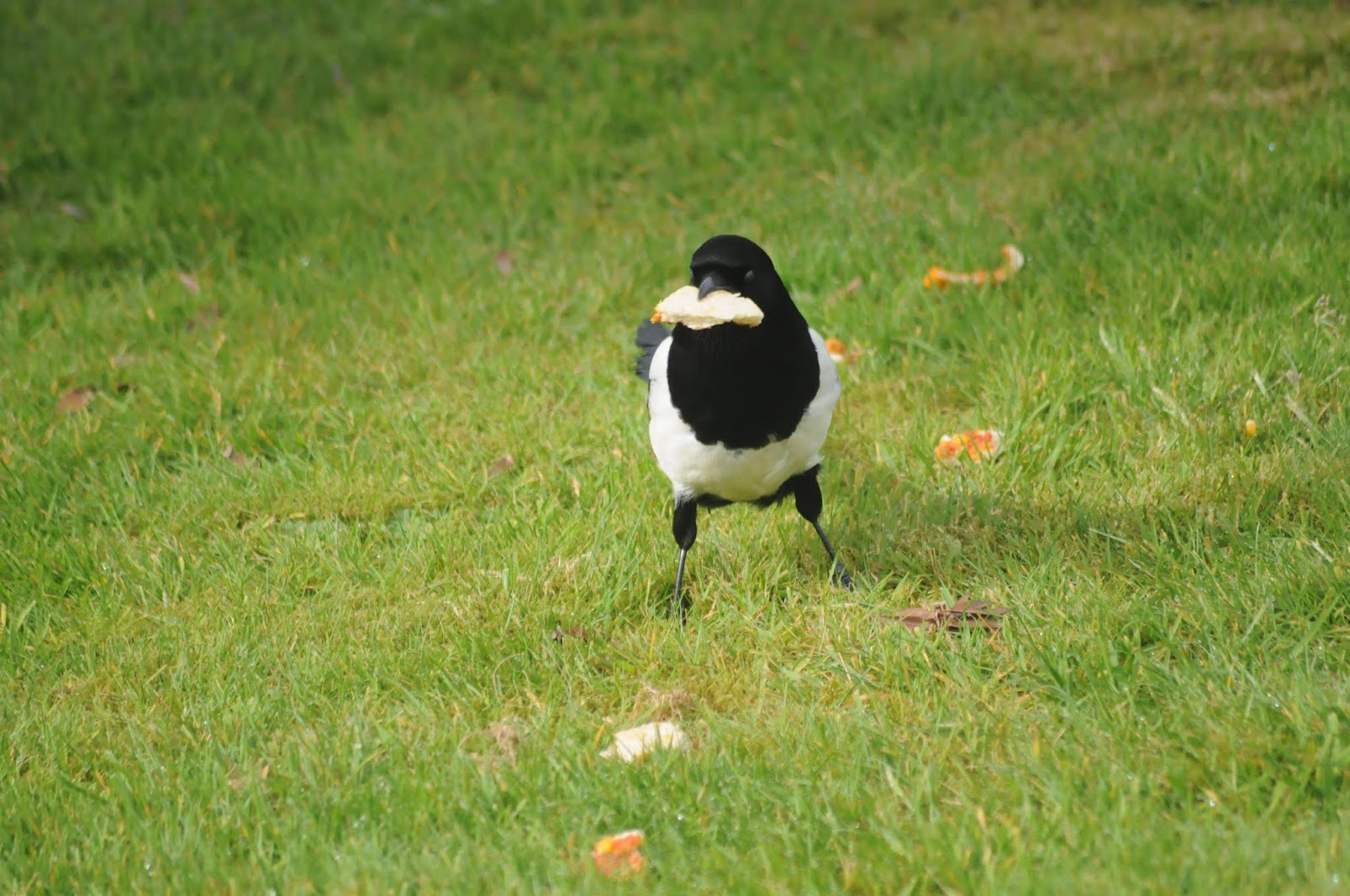 The Confirmation Class of 2020 When the story of the Coronavirus pandemic of 2020 is told these boys will be saying, “I remember it well. It was the year I was to make my Confirmation but….”