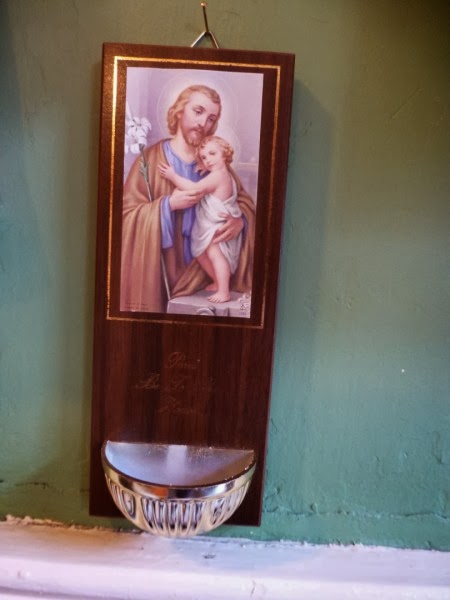 Remember when there was one of these in every house?

Martin Chute was putting the finishing touches to the All Regions computer shop sign. Another lovely Listowel paint job. 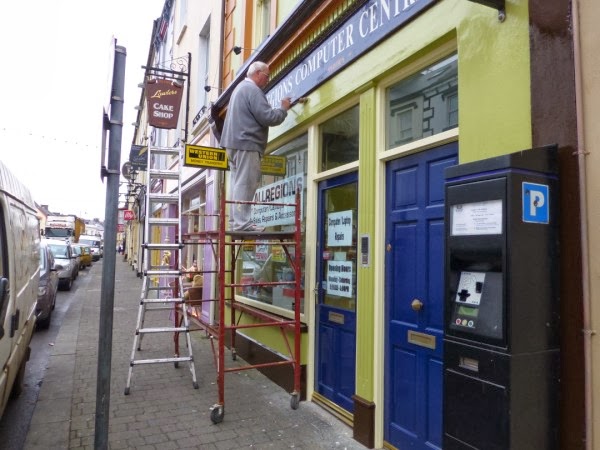 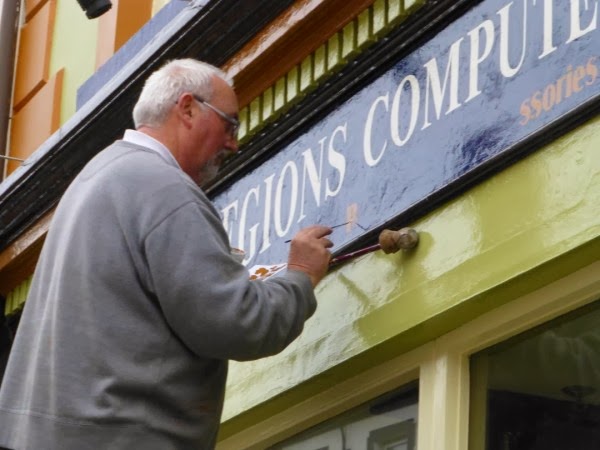 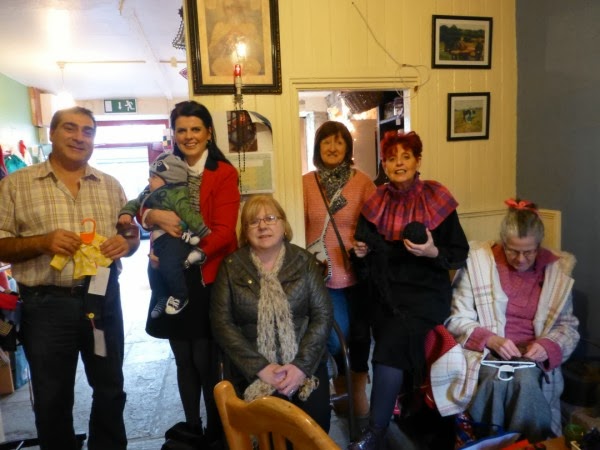 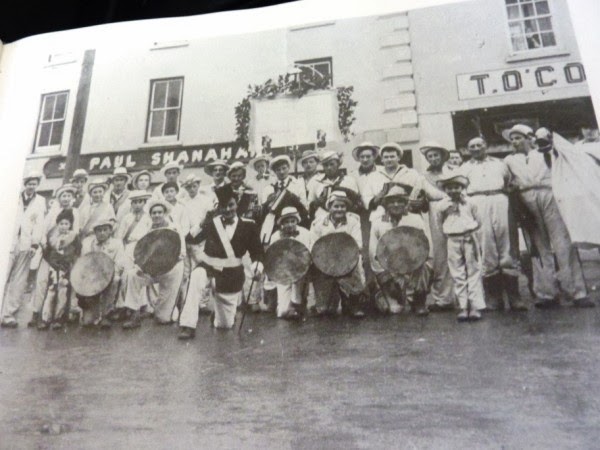 This is an old photo of Kilocrim Wren Boys from Vincent Carmody’s North Kerry Camera. I’m including it here to introduce a request. A student from UL has contacted me to look for an account of winners of the Wren Boy competition at The Harvest Festival down through the years. She is doing a project on the Brosna Ceilí Band. Apparently this band was formed originally to take part in the Wren Boy Competition. 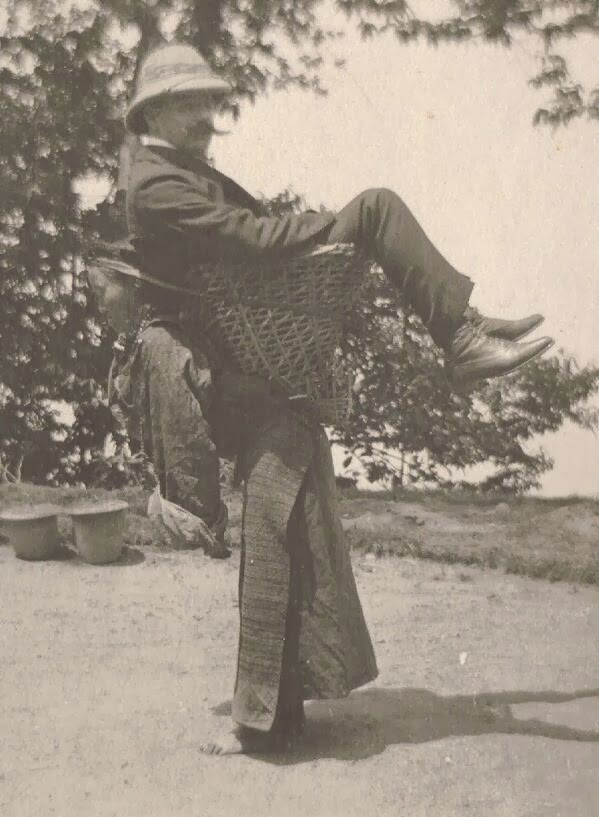 In 1903 this Bengali woman carried a British merchant literally on her back. Look at her thin little frame, her bare feet and the pannier tied around her head. Both people in this photo accepted the situation as their lot in life. 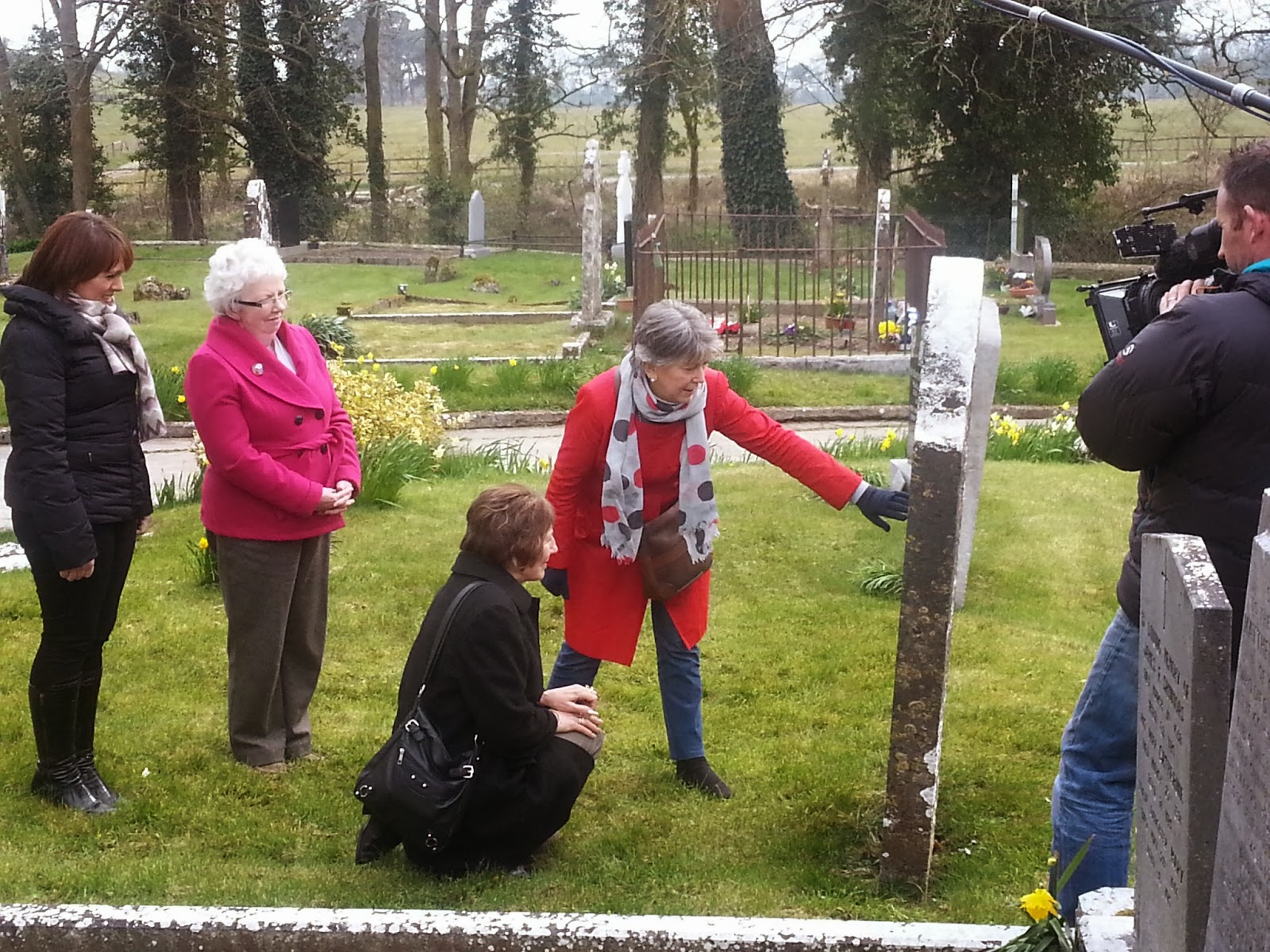 Kay Caball points out an inscription on a headstone to Julie Evans a descendant of one of the “orphan girls. The photo was taken during the filming of the recently aired episode of Tar Abhaile”

Kay Caball, formerly Kay Moloney of Listowel has announced some great news on her blog:

“I am delighted to tell you
that I finally finished my book on the 117 Kerry Girls who went to Australia in
1849/1850 and it will be published by The History Press Ireland in Spring 2014.

The Kerry Girls: Between the Famine & The Crown

This is the true story of
117 Kerry girls sent out to Australia in 1849/1850 from Workhouses in Dingle
(20), Kenmare (25), Killarney (35) and Listowel (37), under the auspices of the
Earl Grey ‘Orphan’ scheme.  The majority of these Kerry teenage girls were
not in fact ‘Orphans’ as many had one parent alive.   Their
emigration has become known as the ‘Earl Grey scheme’ after its principal
architect, Earl Grey, Secretary of State for the Colonies in Lord John
Russell’s Whig government at the time of the Great Irish Famine

The Imperial government
saw it as an opportunity on the one hand to clear out some of the overcrowded
Irish workhouses and on the other, to provide much needed female labour and
potential marriage partners for colonial settlers.  In the two years that
the scheme was in place, over 4000 Irish girls were sent to the other side of
the world.

This book seeks to bring
to the notice of the public both here and in Australia, the circumstances that
lead initially to the Kerry girls confinement   in the workhouses,
their ‘selection’ and shipping to New South Wales and Adelaide, their
subsequent apprenticeship, marriage and life in the colony.   While
it is not a ‘Famine’ book, it sets out the terrible circumstances that they
left behind in Kerry and the mixed reception afforded to these ‘useless
trollops’ following their arrival.  We ask if their emigration was an
opportunity or a tragedy?  Did they become pawns in a political struggle
between Imperial and Colonial interests?

It is estimated in
Australia that there are 277,173 descendants of these 117 girls.  The
Chapters are interspersed with remarkable pen pictures of a number of the
girls, provided by their descendants.   These pen pictures show the
human side, the different personalities and their reaction to the changed
conditions of their lives.   If you haven’t seen the story of Bridget
Ryan, one of these girls,  on the recent TAR ABHAILE documentary, you can
access it on TG4 Player.  It is highlighted on the
boxes on right and Bridget’s story is on Episode 3. Link

My research into the
project over the past two years, included identifying the girls from the four
workhouses and matching these with shipping and baptismal records.
Further research took place through the individual Minutes of the Boards of
Guardians of the workhouses, Tralee/Kerry 1848/1850  newspapers,
Australian 1848- 1851 newspapers, British Parliamentary Records  etc.,
etc.”

Santa Parade, Listowel Celtic under 8’s and Shipwreck by Bromore 1882