Santa Parade, Listowel Celtic under 8’s and Shipwreck by Bromore 1882 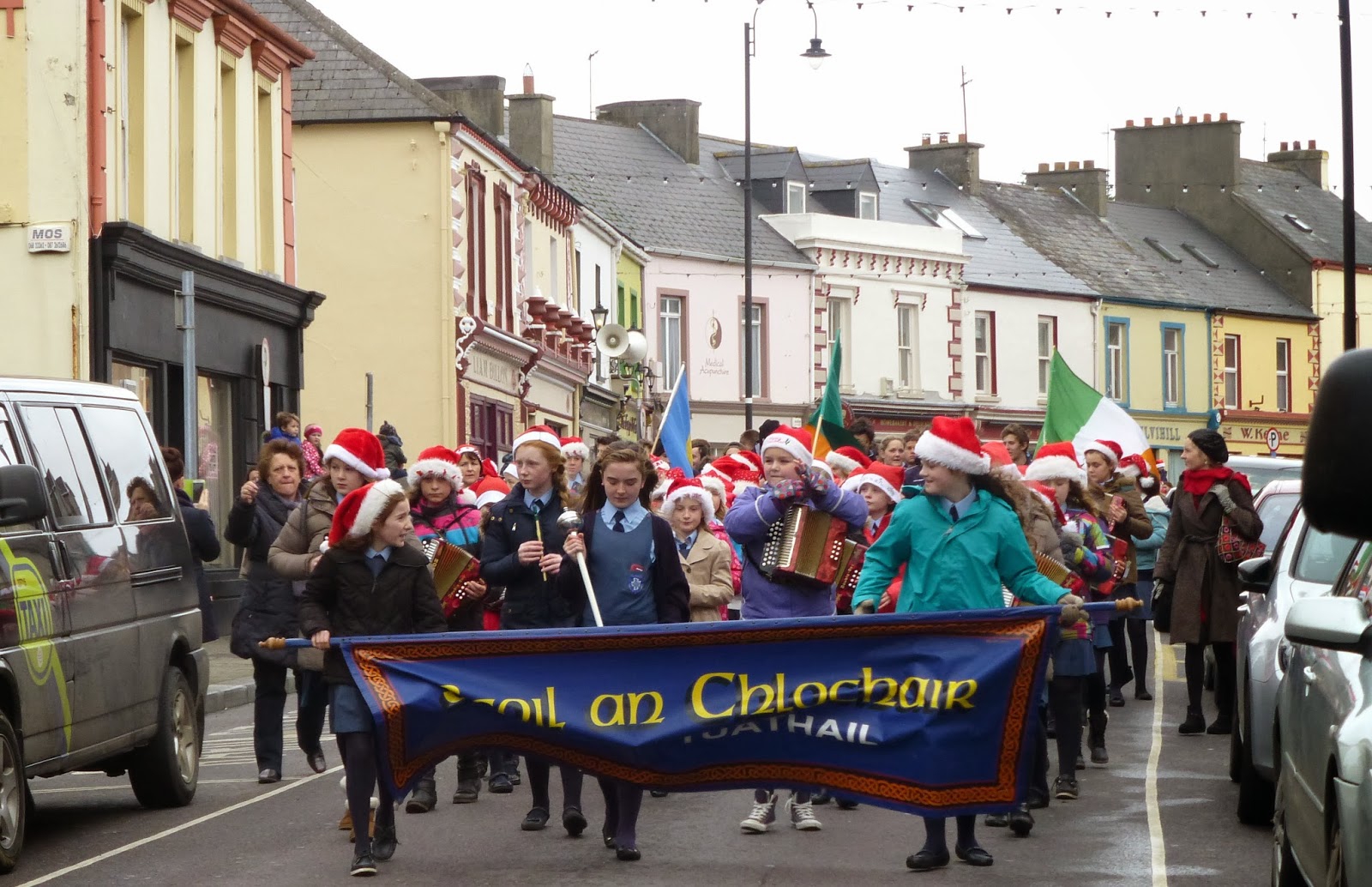 The last voyage of The Dronningen

This is Mike Flahive’s account of a shipwreck off the Kerry coast by Bromore in 1882.

The Dronningen left Glasgow fully laden with
one thousand tons of gas-coal on the  11th of November 1882.   She was a
barque with her home in Christiania now known as Oslow  in Norway. Originally
intended for immigration it was decked out in first  class style. Under the
command of Captain Carl Anderson and with a crew  of sixteen she was bound for
New York. The Dronnin Gen was towed by a tug boat to Greenock,  one of the
loveliest harbours in Britain, the tug left her to anchor at the tail of the
bar  off Greenock.

On the 13th she left Greenock and sailed
firstly to the west then southerly down the Firth  of Clyde with a cold but
helpful easterly wind in her sails.  The Dronnin Gen was running under only
fore and aft rigged sails and an outer jib until she  reached the broader sweep
of the Clyde Estuary, there the crew of sixteen  broke out the square sails of
the fore and main mast and heeling hard to starboard she went south  at a fair
pace. Capt. Anderson steered his ship through the sheltered waters of the Clyde
Estuary  leaving the snow covered mountains and then Arran and Goatfell astern.

At Ailsa Crag, that odd round island he veered
west until the Mull of Kintyre came abeam.    The weather now had changed,
milder, the hard cold easterlies were gone, replaced by a freshening
Southwesterly.  Captain Anderson kept his ship close to the offshore wind
passing  just a few miles off Rathlin Island and later Malin Head, from there
he ordered a course of west, twenty five south for New York.

Around
five hundred miles off Achill Island in Longitude 13 degrees 30′ West, latitude
54 degrees North the fury of a severe  hurricane overtook the Dronnin Gen from
the northwest.  All the day and all night on the 18th November 1882 the
hurricane continued in strength with wind speeds of seventy five knots
sometimes gusting  to one hundred, the ship was now quite unmanageable.
Driven before the wind at a rate of twenty four knots, tossing helplessly on a
sea of streaky white foam, it suffered  terrible damage.   One mountainous
sea crashed over her taking the three lifeboats, smashing one to pieces against
the deck, another burst through the captains quarters  on deck forcing him and
his crew to go below. Minutes later a solid wall of water  over thirty foot
high swept across the deck tearing the captains and the first and second mates
apartments from their roots clean away over the side.

In a
temporary lull the crew lashed together and armed with axes made one gallant  foray
on deck, they hacked at the rigging setting free what canvas they could before
again being  forced below by the renewed ferocity of the wind.  All the
time the Dronnin Gen rolled and pitched one minute its gunwhales under water  the
next crashing into a trough submerging its bow in green seas, while the one
thousand tons of coal shifted with each lurch threatening to destroy the ship
from the inside.    For three days they were without food, cold and wet
and deafened by the terrible sounds of tons of water smashing onto the deck, of
the coal hammering her insides, of the  ship itself and creaking and groaning
expecting every moment to be their last and theirs a watery grave.

At 6 oclock that dark Monday night of the 20th
Noevember 1882 a lookout saw the beam of Loop Head Lighthouse to the East.All
they could do now was pray. The Dronnin Gen missed the storm washed cliff of
Loop Head and the Clare coast  by less than half a mile, the confusion of seas
there opening more seams and putting the weakened  crew on the pumps to intolerable
pressure to maintain the upper hand.

Captain Anderson knew it would be over soon one
way or another, they could not hold out much longer.  At half past eleven with
a sickening lurch the Dronnin Gen went aground at Faha south of Lick Castle on
the North Kerry coast. Driven further ashore  all night with each gigantic
swell and a rising tide it finally rested at Poultenaw.  The captain and crew
stayed aboard until they were rescued in the morning by local frmers alerted by
a Mr. Hunt from Doon who spotted the tall masts  over the cliffs of Bromore.
The sailors threw out a rope tied to a strong hauser which the rescuers
secured around a large rock and on this hauser the wet and weary crew were
finally helped to safety.  In true maritime tradition Captain Carl Anderson was
last to leave his ship, he brought with him a beautiful young Newfoundland dog
and a little pup in his pocket.

Amidst great scenes of joy and bewilderment
(as many of the crew only spoke Norwegian) they were taken to nearby farmhouses
for dry clothes, food and rest.

They all returned to the wreck on Thursday and
Friday at midday at low spring tide to salvage  what little belongings were
left, the best had all been lost. People gathered from miles around to see this
once magnificent tall ship now  battered and beaten and filling with sea water.
The local athletic youths assisted the captain and crew in their endeavours to
recover their property on board.

My grand-father Dan Flahive, then seventeen
remembered the captain as a fine blond haired  man over six feet tall with a
beard. He regaled them with the tale of this  last voyage and of others to New
York and Quebec and to Murmansk around the North Cape, the  land of the
midnight sun where there is continuous daylight for ten weeks  of the year.  The
Coast guards of the Cashen took charge of the wreck and the captain and crew
departed with the Norwegian consul to Limerick bidding a fond farewell to their
rescuers and  new found friends from Ballybunion.

On Monday 4th December Robert McCowan as Lloyds
agent auctioned off the cargo of coal  and any other parts of the ship which
could be removed such as ropes, rigging, blocks  spars and masts.

Many memementos remain in the locality, the
kitchen table in Walsh’s of Faha is made from decking of the Dronnin Gen, the
purlins in Flahive’s house in Bromore withstood  that terrible hurricane out in
the Atlantic and many more storms since. Horses ploughed fields and pulled
traps to Doon chapel  shod in shoes made from the anchor chain links at Leahy’s
Forge in Bromore.  On the rocky strand at the waterfall shiny polished lumps of
coal may be found, coal once intended to make gas to light the streets of New
York.

What was left of the Dronnin Gen was quickly
broken up in subsequent storms and now one hundred and eleven years later the
only visible trace is a fluke of one of the anchors showing only at very low  spring
tides, not much but still enough of a reminder to perpetuate the memory of
Captain Carl Anderson and his brave crew and the saga of the last voyage of the
Dronnin Gen. 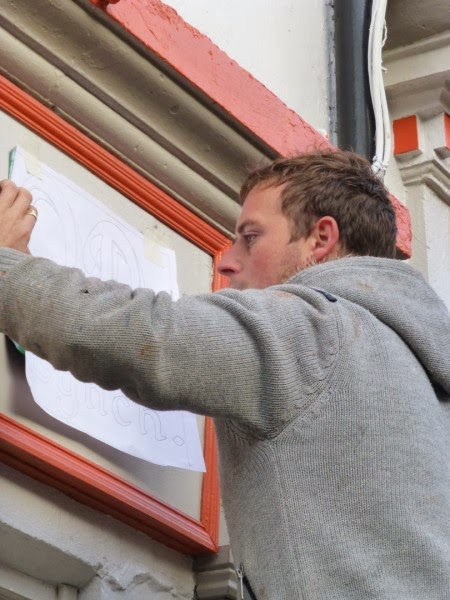 This is Francis, Fred Chute’s nephew following in the family business, painting and sign writing. 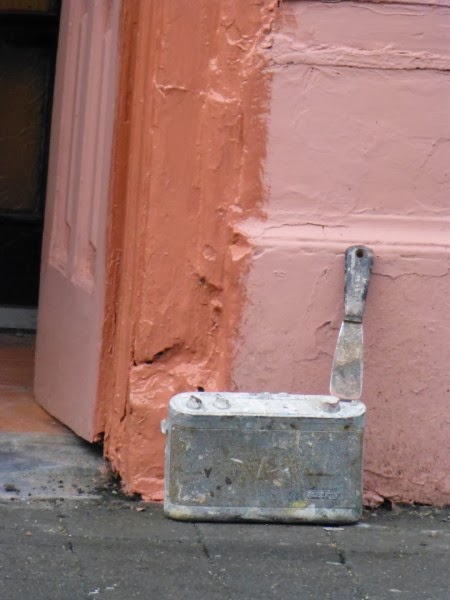 Essential tools of the trade 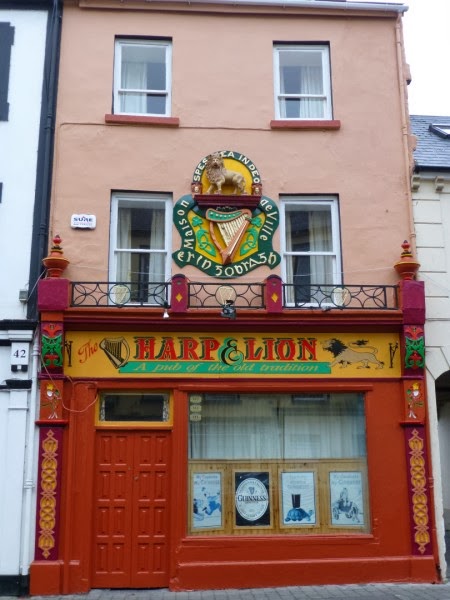 The Harp and Lion is finished. Beautiful! 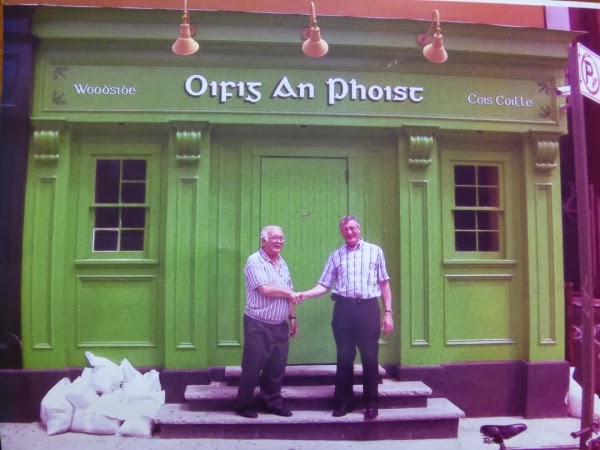 Vincent Carmody gave me this photo of himself and the late Michael Sheehy of New York. They were posing at the back of Jim O’Sullivan’s pub in Woodside. Vincent and Jim have a strong family association with the Irish postal service.

Please follow the link below and listen to this original Christmas song for a Cork girl. I include it especially for all of those away from home this Christmas and reliving in memory the feel of a real Irish Christmas. Enjoy! 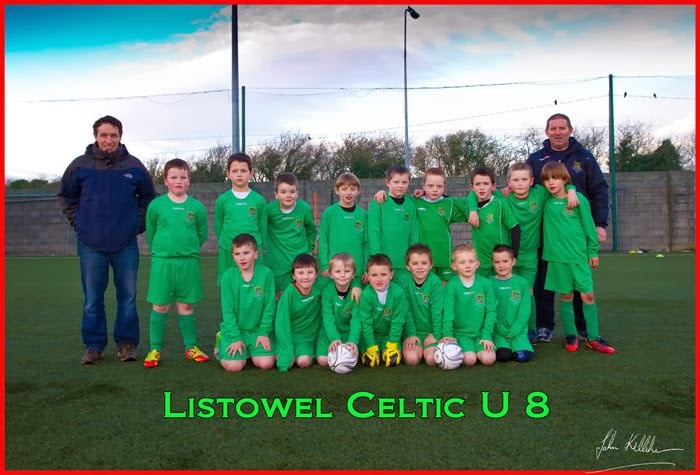