One of the features of Blogger, this is the blogging tool I use to write these internet musings, is that I can see where my readers are based. I don’t know who is reading my blog but I do know where in the world they are located. Obviously, most of my readership is in Ireland. After that the U.S. is the principal location for my readers. But my pageview figures for Australia are growing daily. This tells me something about emigration patterns then and now.

An interesting aside is that I seem to have a loyal following in Russia with an average of 5 views per day. I’d love to know the identity of these people and what, if any,  their Listowel connection is.

Now back to emigration to the U.S. 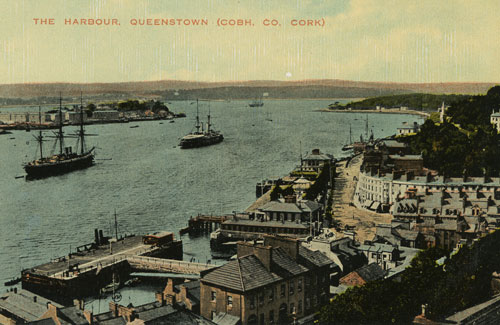 It was the custom to hold an american wake for the departing emigrants. This account is from Maggie Land Blanck

There were mixed feelings in Ireland about immigration. On the one hand
it offered greater opportunity to the sons and daughters who would not have
been able to marry and have families in Ireland and who would go off to seek
their fortunes in a new world. On the other hand it meant that they would never
see their parents again.

The words of the Irish immigration song The Shores of Americay
indicate this clearly:

But
yet it is for gold I go, o’er the deep and raging foam,

To
build a home for my own true love on the shores of Americay.

And
if I die in a foreign land, from my home and friends far away,

No
kind mother’s tears will flow o’er my grave on the shores of Americay.

Because the trip was so long and difficult there was little chance that
the emigrant would return to Ireland. This was equated on the part of the
family left in Ireland as being as good as dead and a custom arose to hold a
wake for the departing emigrant.

The custom of sitting up all night with the dead until the burial the
next morning (called “waking” or “watching”) was an ancient
practice in Ireland. Irish wakes were a mixture of sadness and gaiety, often
combined with drinking.

It is not know when the “American Wake” came into being, but
it was practiced at least as early an 1830. It became more popular as
immigration increased and was particularly popular in the west of Ireland. To
the Gaelic speakers in Mayo it was known as the “feast of departure”.

The emigrant made the rounds of friends and neighbors in the week
preceding his departure to let them know he/she was leaving and to extend an
informal invitation to the “wake”. The “wake” started in
the evening before the emigrant was to depart and lasted until the early hours
of the next morning.

In the early days the wakes were sober affairs since many people did not
have money to serve refreshments. They were occasions to give advice to the
emigrant and to ask him/her to give messages to loved ones and family members
already in America. As time went on the wakes took on more of a party
atmosphere with food, drink, dancing, and music. In some cases the entire
expense for the “American wake” was sent from America along with the
sailing ticket by relatives already in America.

The night was a mixture of gaiety and sadness. There were bouts of
crying and keening (caoine meaning to wail or lament). Sad ballads about
the difficulties of departing and the hard life of the immigrant were sung.

When morning came the emigrant said good bye to his parents. A
“convoy” of his friends and acquaintances accompanied him to a
particular crossroads or to the train station if one was near.

There was an additional factor deeply rooted in Irish folklore that contributed
to the correlation of going to “Americay”, which lay to the west, and
to death. According to ancient voyage tales, the land of the dead lay in the
mythical isles of the west. Western travelers were believed fated to an early
demise. Western rooms were traditionally reserved for older parents who had
already relinquished control of farms to their sons, in other words the most
likely to be the next to die.

Ironically, Tir no nOg, the

western “Land of the
Young”, was the place from which no one returned except to wither and die.

Conditions on board were fairly horrific for this long journey. There are accounts of singing and dancing but there was also much hardship and sickness.

Before the 1850’s immigrants from Europe came by sailing ships. The length of the crossings varied according to the winds, tides, and other factors. The estimates for crossings under sail range anywhere from four to twenty-four weeks with an average trip of 8 weeks.

Steamships started crossing the Atlantic in 1850. The length of a voyage from Bremen to New York by steamer took about seventeen days. By the mid-1860’s most immigrants were coming by steamer. However, up until the 1870’s many people still traveled by sail. Steam ships up until WWI took 2 to 3 weeks. By 1920 the trip across the ocean took one to two weeks.

The overwhelming majority of immigrants traveled in steerage where there was no lighting and passenger were packed in as tightly as space would allow. Steerage passengers had to provide their own bedding. Each passenger got a berth that was 18 inches wide by 6 feet long. The berths were often in tiers up to four rows high. Frequently they were poorly build and rickety. Men and women who were strangers to each other before the start of the journey were berthed together. In 1852 a new law required that men be berthed separately.

The trip was not a dry one. Water seeped into the steerage through holes that were supposed to be for ventilation. Most passengers were sea sick the first few days out and only in rough weather afterwards. It was impossible to come on deck in bad weather. The hatches would be battened down and passengers in steerage would have to remain below in the dark and rocking ship. There was on average one toilet for every hundred passengers. Frequently the toilet was on deck, where they could not be reached in rough weather. Because of the close quarters in which they lived, passengers often suffered from illnesses like trench mouth, body ulcers, and lice. Conditions were frightful. Immigrant ships were recognized by the smell.

Early ships were often called “coffin ships” because of the frightful conditions and the numbers of people who died during the crossings. In 1847, 1,879 immigrants died on the voyage to New York. Eventually government supervision of sanitation regulations improved conditions.

(This account comes again from Maggie Land Blanck who has done an enormous amount of research on the topic.) 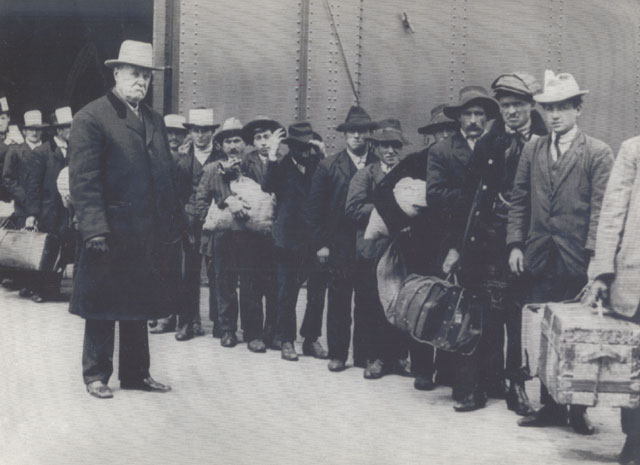 Each
immigrant passed single file through the registry department. The name, age,
class, nativity, destination, occupation, amount of money, were checked. In
addition questions were asked that applied to the new law. (The new law was meant to weed out “undesirables” like criminals , the very old and the destitute) Anyone suspected of
answering falsely was sent to a separate area for further questioning and
verification.

In 1869 a total of 258,989 people entered the
United States through Castle Gardens. This included:

7.5 Chinese from the Celestial
Empire

The 1871 Harpers Weekly article says that many of
the older people arriving from Ireland could not understand or speak anything
but Irish.

Make yourself  cup of tea. Set aside 25 minutes. Watch this;