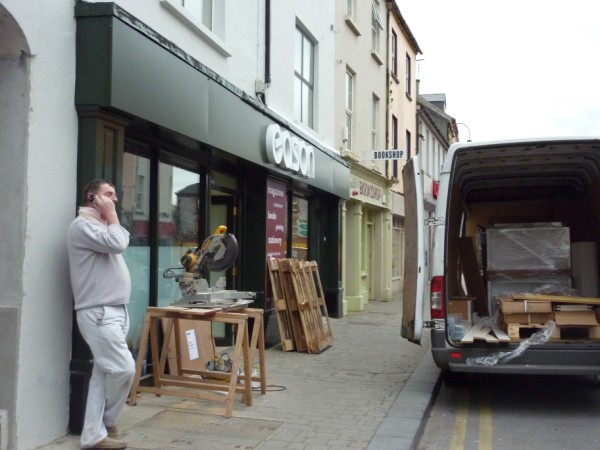 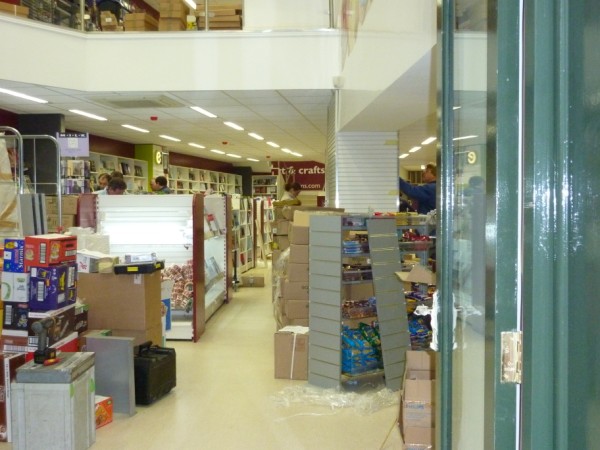 A new chapter in retail history in Listowel is opening today. This was the scene yesterday. Today it will be all ship-shape and Bristol fashion. If Mickey Kearney could only see his old place! 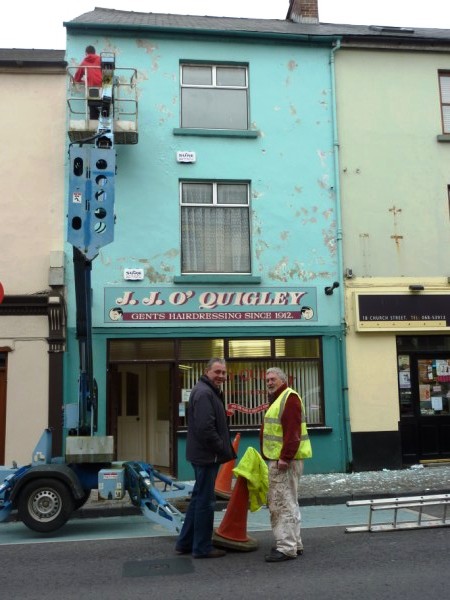 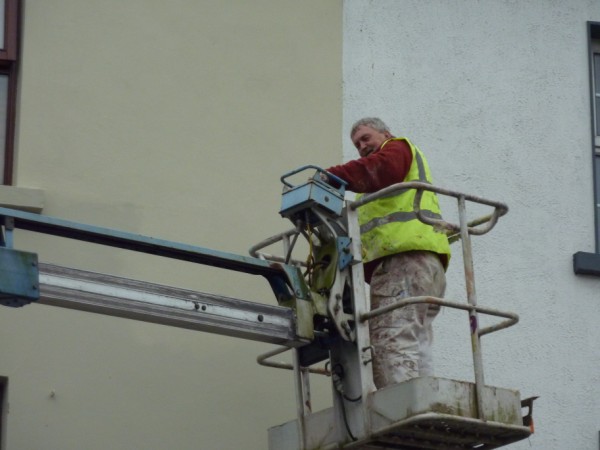 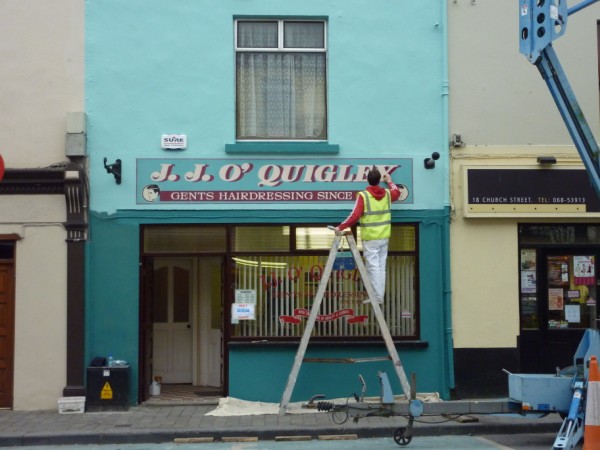 Across the road, another premises is getting a face lift before its big birthday.

Sir, I am writing from Alice Springs, Australia about my first visit to Ireland and Tralee at end of May/start of June 2012.

You must get many letters like mine but I hope you will assist me in my hope of finding descendants of my great-great-grandfather who was from Tralee.

He and two of his brothers were sent to Bermuda during the Great Famine, for stealing a cow. They endured great hardships and were released finally in Van Dieman’s Land (Tasmania). I don’t know what happened to Owen’s brothers after they were released.

My great-great-grandfather was Owen (Eugene) O’connor, baptised at St John’s RC church in Tralee on 26 May 1817. His brothers were Thomas, b.1810 and Cornelius b. 1828. Their parents were Denis O’connor and Ellen Doyle.

I hope readers of The Kerryman will be to help me reconnect with members of my Irish family. I can be contacted at the email address: lyn.mcleavy@gmail.com

Ed O’Connor alerts us to another great resource for people In the U.S. researching their Irish roots

Now a treat for you all.

John Fitzgerald, formerly of this parish but now residing in Dublin sends us this epic.

According to  Kavanagh, Homer’s ghost said  “I made the Iliad out of such a local row.”

I enjoyed this tale of boyhood tribalism. I’m sure you will too and especially

anyone who remembers any of the participants.

The Battle of Tae Lane

There’s a
one eyed yellow idol to the north of Khatmandu,

there’s a
cavalcade of cavalry lost in Death Valley too.

there’s the
pharaohs in their pyramids and the Eiffel on the Seine,

but who of
you remembers the famous Battle of Tae Lane.

Napoleon
planned his sorties from a galleon out at sea,

and
Hannibal crossed the Great Alps on an elephant you see,

‘Twas in
the year of fifty nine, at the back of Sandy’s shed,

long since Hitler went to Poland and Paddy to
Hollyhead,

and of all
the wars you’ll mention, there is none will hold a flame

to the
fight fought by the Gravel Crushers defending their Tae Lane.

as the boys
played round the grotto and the old ones knelt to pray,

but at
night behind the Astor, they gathered one and all

to plan their
deadly battle and The Gravel Crushers fall.

The sally
and the hazel were long stripped before the fall.

Nature
played no part in this of that I well recall.

as he swung
through trees and branches letting bows and arrows fall.

The signs
were all apparent if only eyes would see.

Paddles Browne
went round the town on an errand of mystery.

From Moss
Scanlon’s up to Shortpants he gathered off cuts by the score,

leather
pouches for the making of the deadly slings of war.

Bomber Behan
scoured the backways, picked up bits from forge to forge.

Each scrap
of steel, the point he’d feel, an arrow tip or sword.

‘Til at the
back of Charles Street, as the last forge he did pass

he felt the
boot of Jackie Moore go halfway up his ass.

But the ear
of Tommie Allen, sharp as any corner boy

Heard the
beans were spilt , they’d all be kilt , and he began to cry .

“The game
is up”, he shouted from Scully’s Corner’s vantage point

Pat Joe Griffin
must be warned to strike early on Tae Lane.”

Brave Victor
of the Broderick clan defied the daring raid,

He called
his troops together and ‘twas then this plan he made.

under Dan Moloney’s
garage in the heart of sweet Tae Lane.

He
marshalled troops to left and right, of the gushing sewer outfall.

No silver
from these waters flowed of that I well recall.

and there
they’d wait in soldier’s gait ‘til Victor shouted jump.

The Gravel
Crushers ammo was got ready for the drop,

those
gallant lads from William Street who defended their Tae Lane

The butcher
boys, the Shaughnessys were such an awesome sight.

Titch  and Teddy ever ready,  pointed bamboos on the bank

As P.J.
stood next to Victor, his brothers he outranked.

While Back
The Bank they gathered just below the Convent Cross,

where
Mickeen Carey taught us all the game of  pitch
and toss.

John Guerin
took no notice, no thoughts for God or man

only the
rushing of those waters where the silver salmon ran.

Pat Joe was
the leader of the Casbah’s fearsome band,

with the Nolans,
Long John and Spats, he’d backup at his hand.

There were
the  Reidys and the Roches, the Cantys
and the Keanes

and they
all set off together to capture sweet Tae Lane.

‘Twas a
battle worth recalling, there were heroes more than few,

as the sky
above grew darker when the stones and arrows flew,

and in the
close encounters , it then was man to man

one a Gravel
Crusher and one a Casbarian.

With blood
flowing towards the river, it all came down to two,

the leaders
of those fighting hordes, Victor Broderick and Pat Joe.

They
wrestled in the nettles, in the rubbish they did fight

The duel it
was well balanced as they struggled on the grass,

a rabbit
punch, an elbow  a kick in shin or arse.

No mercy
would be given, sure the day would end in pain

such was
the price one had to pay for lovely sweet Tae Lane.

The bold
Mickey took a horsehoe  which he’d
pinched from Tarrant’s forge.

No more in
vain he could watch in pain his brother  poor Pat Joe.

The glistening
shoe of steel he threw, it caught Pat Joe’s left grip.

“The odds
have changed”, Eric Browne exclaimed “we’re on a sinking ship”.

Just then
the sky above  them changed, the sun  shone through instead

as round  by Potter Galvin’s came the flash of Ollie’s
head.

Mounted on
a milk white stallion from Patrick Street he came

thundering to
the brother’s rescue as he lay wounded in
Tae Lane.

There are
mixed views of what happened next, but I was surely there.

No classic
from the Astor or the Plaza could compare.

Mac Master
or Mc Fadden could never stage the play.

Who won?
Who lost?  What matter, all were Gleann
Boys on that day.

That battle
royal still lingers in the confines of my mind.

No time nor
tide dare loose it as long as I’m alive.

fought
fiercely by those boys of yore for the right to rule Tae Lane.