This is the link to the minutes of Listowel Town Council’s December meeting. The councillors addressed issues like dog-fouling, which is particularly bad on the footpaths in town, parking and the septic tank controversy. I am glad to see the imminent reforming of a traders association.

Thank you, Jimmy Moloney, for keeping us up to date on the issues exercising our town councillors. Jimmy has opened the doors of the council chamber to us all.

FORMER Listowel natives Patricia and Maurice Regan, proprietors of the Newtown Anner Stud Farm at Clonmel, commenced the new year in the best possible style at Fakenham on Sunday where their hurdler, Joan Darc, trained at Newmarket by Bill Quinlan and ridden for the first time by Matt Crawley, won the 2ml 4f selling hurdle impressively by seven lengths from the favourite Group Leader.

The winner was challenging the leader when making a serious blunder at the third last as her rider went out the side door, but he somehow managed to cling on and get back into the saddle, before going to the front two out, and being heavily eased on the flat to race home a most impressive winner.

Jimmy Halpin and his doorman provide passers by on Church St. with an amusing commentary on the economic state of the country.

Santa has returned to the North Pole and now Rico has taken up his post at the shop door. 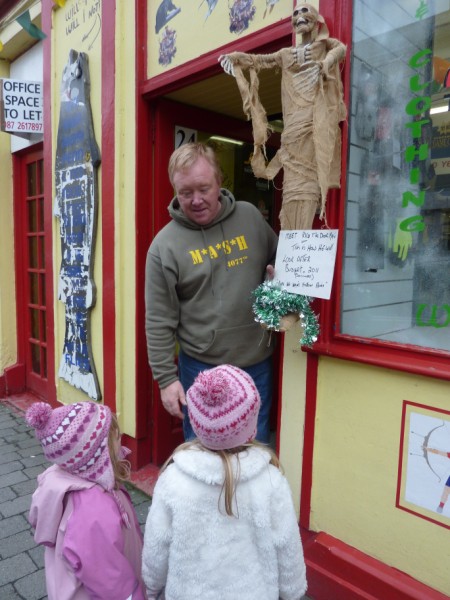 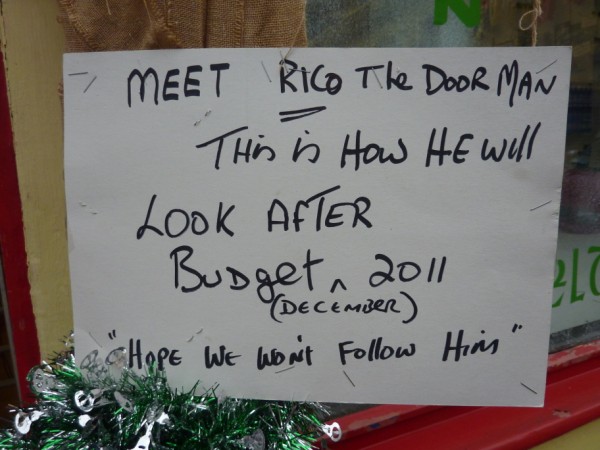 Speaking of the parlous state of our dear country’s economy, emigration has become a fact of life for rural communities like ours. I want to take this opportunity to wish Bon Voyage to a dear friend, Mairead, who, next week, is heading out on her great Australian adventure. My photo shows her bidding farewell to her friend, Jim. 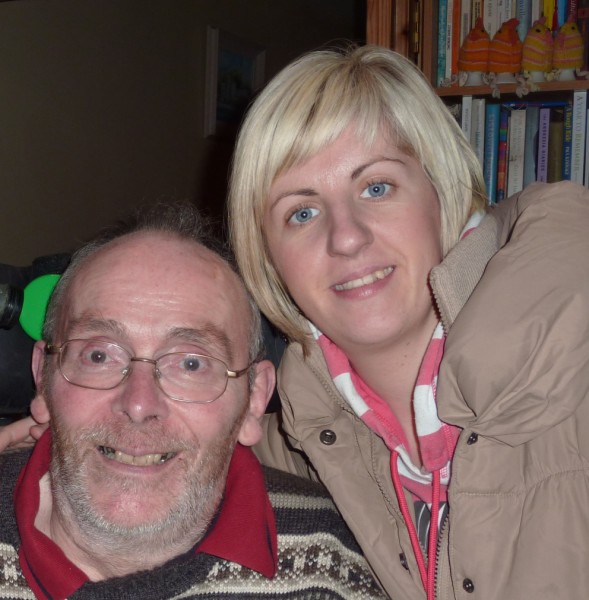 Mairead is going to join a young North Kerry diaspora who have relocated to the Perth area down under. Like so many others, she is “only going for a year”. But, like so many others, will she fall in love with the lifestyle and find a better future far away from our shores?

In the days before the internet, mobile phones, Skype and easy air travel we knew the phenomenon of the American wake. In the 1930s, 40s and 50s the neighbours gathered in the house of the soon -to -depart emigrants and held a hooley of singing, storytelling and dancing. The atmosphere had the air of the traditional wake,  great sorrow mixed with reminiscence. The family and neighbours knew that it would be a very long time before they saw these young people again. The ageing parents were often afraid that they would never again see their children this side of the grave.

Partings nowadays are just as sad. The hooley is usually in the local pub. The departing young people are looking forward to a new sunny and prosperous life. Australia and Canada have replaced the U.S. as the preferred destinations and young people tell me that you are as likely to meet a Listowel person on the street in any big city in Australia as you are to meet them in Dublin or Cork.

Bon Voyage, Mairead! May you realise your dreams and come back safely to us. You will be missed.