A Stranger to Darkness

Liam Lynch of Knocknagoshel, who passed away last week was an extraordinary human being. As a young man, he lost his eyesight and so began his new life as “A Stranger to Darkness”. This is the title of his autobiography in which he gives an account of a life well lived. He gave all the proceeds from the sale of the book to his beloved charity, Irish Guide Dogs Association. Liam travelled widely, acted in a play, gave talks on coping with blindness and remained to the end a great scholar and student of Irish history and literature. May the sod rest lightly on his gentle soul.

The following extract from The Irish Library News of 2007, kindly sent to me by Jer. Kennelly, gives you an idea of the measure of the man.

Kerry County Library was recently given a donation of some newspapers relating to the early part of the 20th century.

The donor was Knocknagoshel  native, Liam Lynch and among the titles were copies of

At the presentation in Tralee Library, Liam also donated copies of his recent autobiography A Stranger to Darkness. In his book, Liam writes about his life experiences, both before and after his sight loss, and explains how he regained his independence through mobility training and partnership with his guide dog, Yale.

Liam is very kindly donating the proceeds of the book to Irish Guide Dogs for the Blind and he is well on his way to his fundraising target of €35,000 which is the total cost of a guide dog

partnership (the breeding, training and support of a dog throughout its working life). Liamʼs fundraising efforts on behalf of IGDB have been so successful that a new guide dog puppy was named Kerry, in honour of Liamʼs home county. The book is available from Irish Guide Dogs for the Blind, on lo-call 1850 506 300. 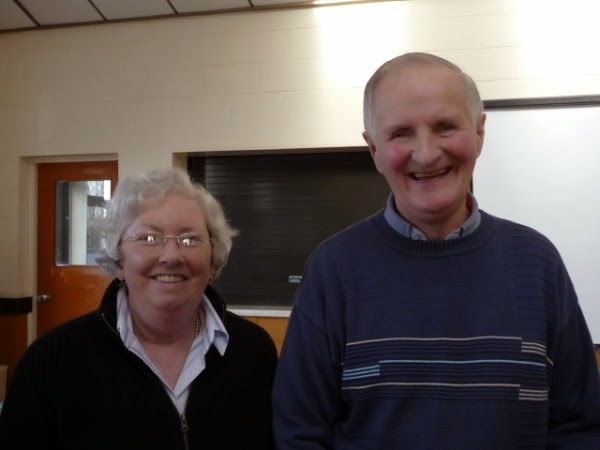 Here I am pictured with Liam  when he visited Presentation Secondary School, Listowel to talk to a group of students who were fundraising for Irish Guide Dogs. 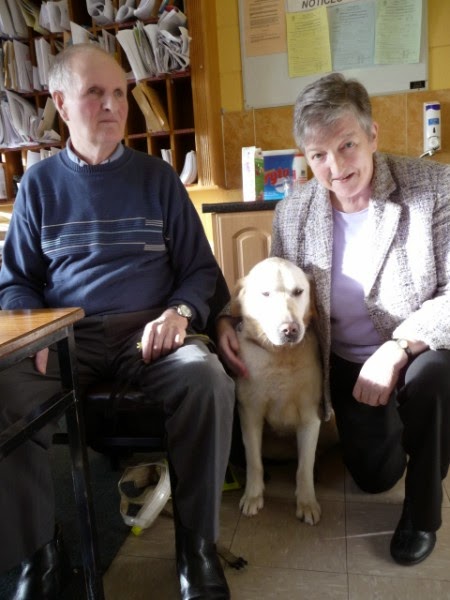 Liam and his dog, Yale with Sr. Nuala who, sadly, passed away just days before Liam. 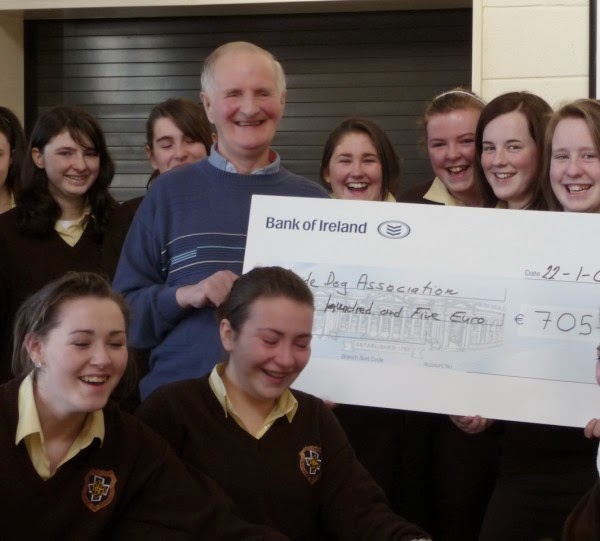 Some of the students at the handover of the cheque from their sponsored walk.

You must read this 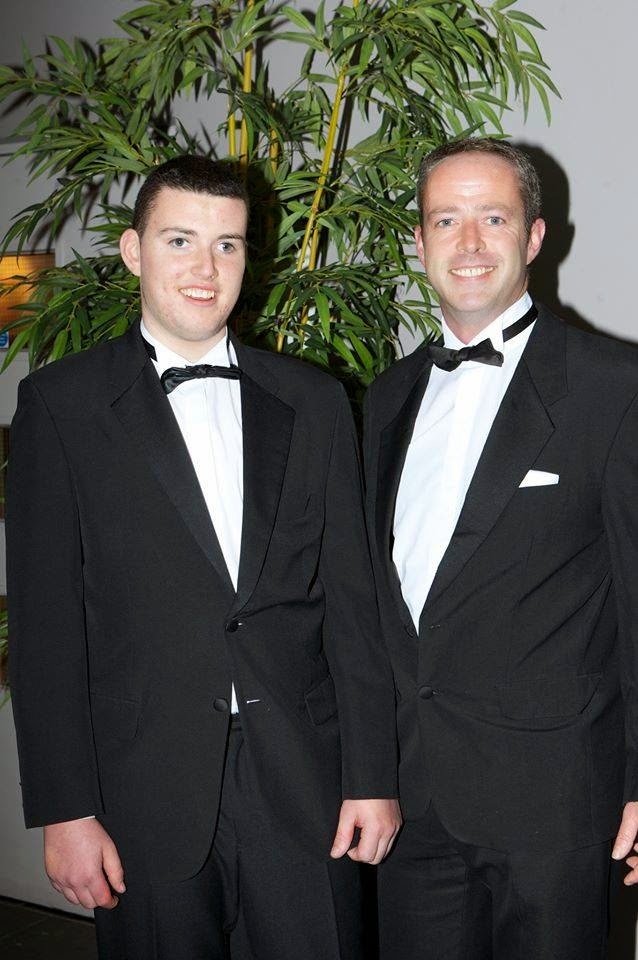 Aidan O’Connor gave one of the best speeches ever at the Kerry Stars awards. Here it is in its entirety. I challenge you to read it without a tear. Even if you hate reading a lot of text, and some of my followers tell me they hate to see chunks of prose, please read this one;

“July 1998 was a warm month. I remember it
because I was living in Tralee and I had a tank of gas blow up in the heat at
the back of my house.

Next door in No.28 lived Hamdun – a gorgeous little
four-year-old boy with beautiful dark brown skin; the son of an Indian doctor
who worked at Kerry General Hospital.

Hamdun kind of did his own thing. For hours each
evening, he’d peddle his tricycle up and down the housing estate, talking out
loud to himself, Indian talk.

I guess you could say Hamdun was a bit of a loner.

It was a Tuesday in that July, and a crowd of kids
from the estate were playing ball on the green. As they do, like a shoal of
fish, they’d all run after the ball together, up and down, back and over.

I stood inside the sittingroom window, looking out,
and once they all chased the ball together to one corner of the field, I
noticed a lone figure standing in the middle of the green, all alone, hands
hanging by his side, just staring at the rest.

For the first time, in the four years of Oisin’s life,
it struck me like never before. That was the way it was then, and that was the
way it was always going to be. Oisin would always be outside, looking on;
always watching it but never part of it.

There would be Oisin, and there would be them.  Even
Hamdun, the dark-skinned Indian boy with no English, abandoned his tricycle
that evening to join the football match.

Even Hamdun, the loner, was now one of them .

I found myself in that funny place that every family
member knows. Every bone in your body wants to jump in and save the day, while
at the same time, you know you have to stand back too and let Oisin find his
own way.

Your head starts to fast forward and you wonder about
the day Mom or Dad aren’t going to be around anymore to save the day. What
happens then?

Why can’t every child just be the same. Why can’t one
mould fit all?

That Tuesday evening wasn’t the end of the world by
any means – not for me and not for Oisin. Far from it.

There are family members sitting all around you here
tonight who have had to deal with so much more than Oisin or Linda, his Mom, or
I. A physical or intellectual disability on its own is massive mountain to
climb. Both together can turn a family and their world upside down.

There isn’t a tablet you can take to make it all go
away.

All around you tonight are family members whose lives
of loving and living with special needs is not easy. Anything but. There are
family members here tonight where serious and often life-threatening medical
conditions are part of everyday life; where tubes and drips and syringes and
medication are as common as the kitchen cutlery; where speech therapy and
physiotherapy and occupational therapy and trips to the doctor are all a
regular part of getting on with life.

Family members do all this – and go that extra mile –
because of one overwhelming reason. Love – the love they give and the love we
receive.

There’s something about Oisin’s love that I have
always struggled to describe.

It’s free, of course, and it comes in buckets. It’s
ever- present and it’s overpowering.

But there’s one thing. Above all, it’s unconditional
and non-judgemental.

It’s a love that says I’ll love you anyway, no matter
what. It’s a love that refuses to be influenced by position or dress, status,
wealth or title. And in a world where all of us have agendas and angles, that’s
an extraordinary thing.

Linda or I have never asked for special treatment for
Oisin. What we’ve always asked, and what Oisin wants most, is the help and
support – not to be the best – but to be the best that he can be.

Because it shouldn’t be about being the best or about
measuring up.  Unless we throw away the measuring stick, neither Oisin or any
one of the Kerry Stars will ever measure up in the eyes of the state.

Oisin hasn’t failed. The state has failed him.

What government, what department, or what arm of the
state has the right to decide on Oisin’s happiness or well-being?

Who wrote the rules that say if you’re physically or
intellectually challenged in any way, life for you is going to be made harder
than it already is?

Why do special needs family members still have to beg
and bang on doors and shout louder than everybody else just to get basic
supports?

I think we are lucky in Kerry to have the local
government and public representatives that we have. For all the criticism they
get, I believe they have been exceptional in their support for the club and all
of the lads. They have met them and come to know so many of them. They get it.

To Mayor Brassil and all the Oireachtas members and
councillors, this is my request to you.

Don’t give up. Lead the way. Stand up and be counted.
Double your efforts to help. All of us will meet you half way. Fight for Oisin
and all the lads. Don’t judge them as people. They don’t judge you.

All of us can do more. How different life would be
were it not for the coaches and volunteers in the Kerry Stars who have
literally changed lives. I know the athletes and all family members are
eternally grateful.

I didn’t think it could be done. I was a sceptic. When
Linda first mentioned the idea of Oisin joining Special Olympics, I recall
thinking to myself “Great, here we go again – another glorified babysitting
service where nice people give Oisin a nice pat on the head and tell him he’s a
nice boy”.

How wrong I was. It has been, without doubt, one of
the greatest game-changers in Oisin’s life. How glad I am that for that one and
only time, I Iistened to his Mom, and sent Oisin off to Kerry Stars.

Maybe one day, other sporting organisations like the
GAA will follow suit and adopt a real and meaningful approach to sport for all.

I have never answered, because I know what the answer
is.

Maybe one day, Liam O’Neill or the Croke Park
Executive will come to visit Oisin and give him an answer, an answer as to why
the biggest sporting organisation in this country does little or nothing to
promote and facilitate GAA for people with special needs.

Oisin has the jersey. He has the socks and the boots.
He has the belly for battle. All he’s asking for is a chance.

And when all is said and done, that’s what it comes
down to – a chance. A chance to be the best person you can be and have the best
life that can be lived.

That’s all it is for the athletes – no different to
anybody else.

I know that I speak for Linda too when I say that I am
privileged to be Oisin’s parent.

I know too that every family member here tonight will
understand that in being Oisin’s Dad, I have received far more than I could
ever possible give.

My eyes have been opened to seeing the world in a
completely different way.

I started out thinking I would be his teacher – yet I
was the one who had to learn.

All of us owe a tremendous debt to people with special
needs. Were it not for Oisin, I’m not sure I would ever have known what it is
to be loved that way. I doubt I would ever have come to know such kindness,
such compassion, such forgiveness and such downright good chat up lines for the
ladies.

I owe you Oisin. Big time.

All of us must keep going, keep fighting the good
fight. And really, can we afford not to? If we don’t, what’s the price? There’s
always a price.

Hamdun is studying to be a doctor now, just like his
Dad. I met Akiel, his father, about two months ago and he asked about Oisin.

He told me Hamdun gave up the football – said it
didn’t suit him. Hamdun doesn’t have the tricycle anymore either.

He said Hamdun is so happy and loves Ireland. Isn’t it
great thing, Akiel said, to be accepted in a place – just for who you are?

I said ‘Akiel, I couldn’t agree with you more.”