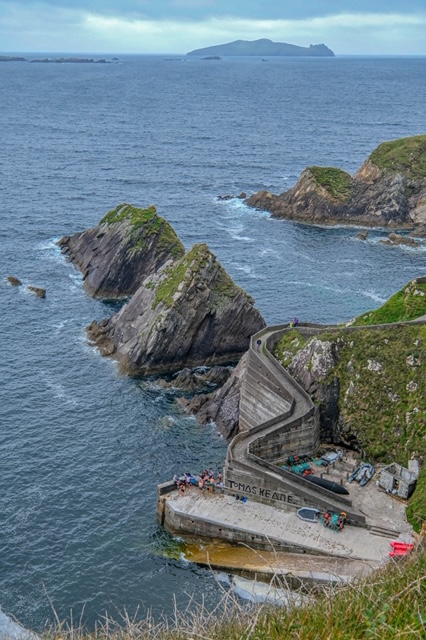 TO THE EDITOR OF THE CORK EXAMINER

DEAR SIR,—On behalf of the semi-famished, comfortless, already over-rented tenants of the Rev. Richard Fitzgerald, Clerk, a middleman land owner in this parish, from whom a plausible letter was inserted in your journal on Friday last, I pray you to insert some remarks from me in an early issue of the Examiner.

The question at issue between the Rev. Mr Fitzgerald and his tenantry is this: Did his reverence explicitly or implicitly pledge his word that, at the expiration of their leases, there would be no increase of rent imposed on his poor people ?

Sixty tenants—men of acknowledged veracity loudly and bitterly declare, in private and in public, that he promised them, twenty-one years ago, that there should be no increase of rent put upon them during his lifetime. Again, they state that he repeatedly renewed this promise during the last twenty-one years.

“No such promise was ever made by me,” writes the reverend gentleman.

However, as industrious, honest, peaceable, and well-disposed tenantry as are to be found in any corner of our island, do positively contradict, their landlord’s assertion. For the information of the public, allow me to state that the public at large in this part of Kerry feel no hesitation in accepting as truth the statement of the Aughrim tenants. We all know that Mr. Fitzgerald has always been remarkable for a memory weak and irretentive. That he is subject to this affliction is known to every tenant on his estate and to the public in general. As, therefore, his reverence’s memory has often been at fault, we may reasonably and legitimately conclude that on the point in dispute it is found wanting.

The assertion of the tenants is that he pledged himself that if they drained the fen—his estate in this parish was at one time a vast quagmire, and that not very long since—purchased lime to fecundate the swamp, brought sand from Ballybunion—distant fifteen miles from their homes —to supply with nutritive matter that hitherto unproductive moor, he would surely allow them to profit by till their improvements in continuing them as his tenants without an increase of rent for the term of his life.

When the destitute tenants implored for some little allowance in consideration of the improvement effected, his reverence’s remarkable reply had been-

“Why make such a demand when you know that everything you do will hereafter benefit and enrich yourself ? Your request is inconsiderate.”

There is not a tenant on Mr. Fitzgerald’s Estate to whom this reply has not been given more than once. The tenants, in my presence, have called the God of Heaven to witness the voracity of the solemn declaration with regard to the oft-repented promise of never requiring any increase of the rent.

Some twenty one years ago the Rev. Mr Fitzgerald importuned a respectable, honest shopkeeper of Newtownsandes, by name Michael Forhan, to become his tenant for a small farm quite adjacent to the village. The land was so wretchedly poor that Forhan refused more than once to accept the holding. At last upon the explicit promise of fixity of tenure at the rent then imposed, Forhan consented to become tenant to Mr Fitzgerald, in opposition to the entreaties of his relatives and well-wishers, and promised to pay at the rate of one pound eight shillings an acre. This rent was regarded as exorbitant by the public. The land could never pay it. By means of a small shop the industrious Forhan managed to meet the call on the rent-day; furthermore to buy lime and draw sand from Ballybunion to Newtownsandes for the cultivation and improvement of the quagmire lands When the land is now reclaimed, and worth no more than one pound eight shillings an acre, the Rev. Mr Fitzgerald required two guineas an acre from Michael Forhan.

Michael Hanrahan has been paying a rent of £30 annually. His land had been let at the highest figure. From him the demand in £50 annually. And the miserable tenant has had but six milch cows on the lands, which could not of themselves maintain that number. The poor man in compelled to purchase meadowing every year from Mr Foster Fitzgerald.  Paddy M’Evoy pays £13 yearly ; in future he will pay £30 or be evicted. Widow Moore’s present lent £9 for three cows—cows in name only. For the cows she purchases meadowing from Mr Foster Fitzgerald; the rent fixed on her is £21, and the poor woman is at present on her deathbed. She made her will a few evening ago, and could afford to bequeath the large fortune of forty shillings to each of her four children. I know that her illness has been intensely aggravated by the fear of ejectment from her little holding, as she knows it would be impossible for her to pay the rent required by Mr Fitzgerald. Jerry Mulvihill has paid a rent of £21 yearly. Mr Fitzgerald expects from this happy man nothing less than £52 a year; I cannot refrain from mentioning the case of Pat Neville. Mr Fitzgerald considers that mans cultivated fen worth two guineas an acre. Every disinterested judge of pasterage say his land could afford to pay 17s an acre.

Now, there are cases as bad as those I have mentioned, and in no case can Mr. Fitzgerald justify an increase of rent. The lands as at present let, are in most instances, too dearly paid for. When we consider that the tenants have borne that injustice for twenty-one years, we must more and more commiserate those who are now threatened with eviction, if they refuse the penalty of their industry by not consenting to a monstrous increase of rent. The lands are much improved by Mr. Fitzgerald’s tenantry, therefore they are to be punished by the confiscation of their property.

I am pretty well acquainted with the condition of the small farmers of this county and, I regret to any, there are not in any part of Kerry so utterly destitute small farmers as the tenants of the Rev. Mr. Fitzgerald. In the first place I find they cannot afford to send their children to school. The only unenlightened people in this parish, are Mr Fitzgerald’s tenantry. And this is the effect of their poverty. Ere they have learned the catechism they have been taught to handle the spade and make the drain for the enrichment of the landlords. In the second place, all Mr Fitzgerald’s tenants, three excepted, are deeply indebted to meal merchants, money-lenders, and shopkeepers. If this be their condition at present, how sadly embarrassed must they not be should they venture to consent to a further increase of rent.

Since Mr Fitzgerald acquired property in this parish he holds the land at a very low rent from Trinity College He has lost no opportunity of increasing his rent-roll. Twenty one years since all his tenantry in this parish were asked to pay a heavy fine in consideration of leases for twenty one years. The fines were paid. I have mentioned that the rents were excessive. The leases were given to nine tenants only, because they alone could pay the cost of the leases. The others were so poor that they could not  afford to take out the leases. But as there was a promise of leases his reverence was precluded till now from demanding an increase of rent. Whenever any of his landlord patrons determine to increase his rent roll, he says to the tenantry,

” Mr So and So will value your lands. Should any man’s land be too dear, I will rectify the injustice.”

But the result of the valuation has always been an enormous increase of rent on the tenant. What I state occurred in this very parish a short time ago. The medium employed by the landlord was the party chosen by Mr Fitzgerald for a like purpose. M Fitzgerald has written to the tenantry, that if they refuse to accept his terms he will sell his interest to English capitalists. Such a threat requires no comment. It bespeaks its own condemnation—

I am, faithfully yours, QUADRATUS. 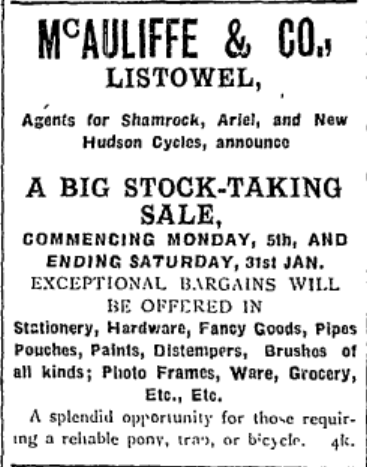 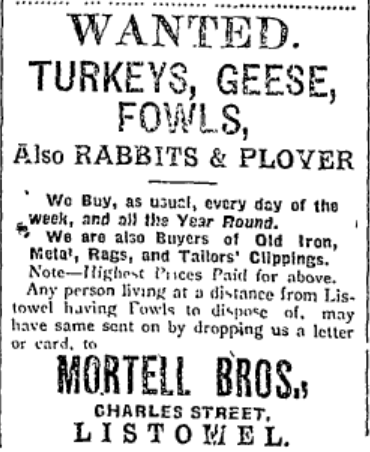 A Lovely way to spend a Saturday morning is at Kilcooley’s Saturday Market. It has lots of lovely food stalls, candles, photographic gifts, jewellery and ceramics. 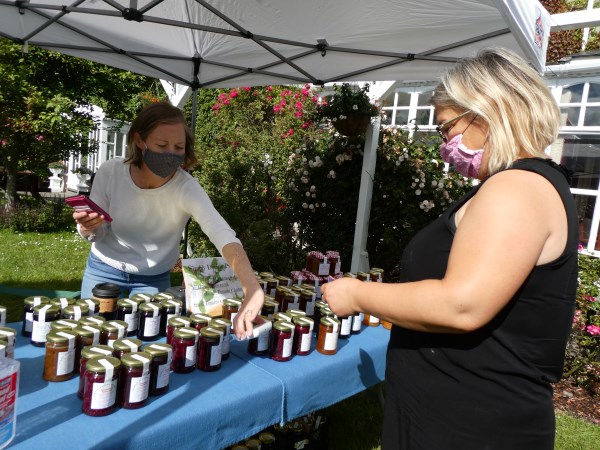 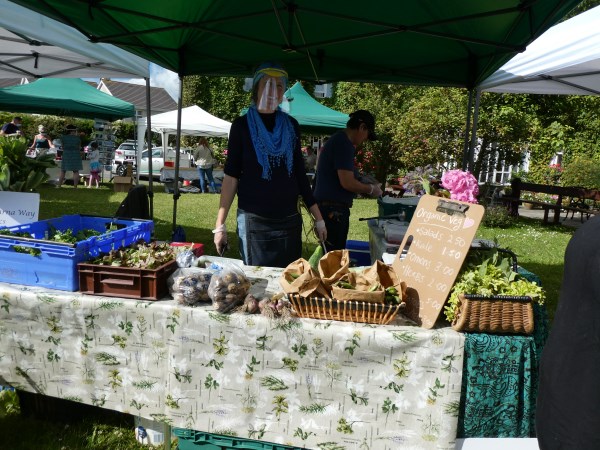 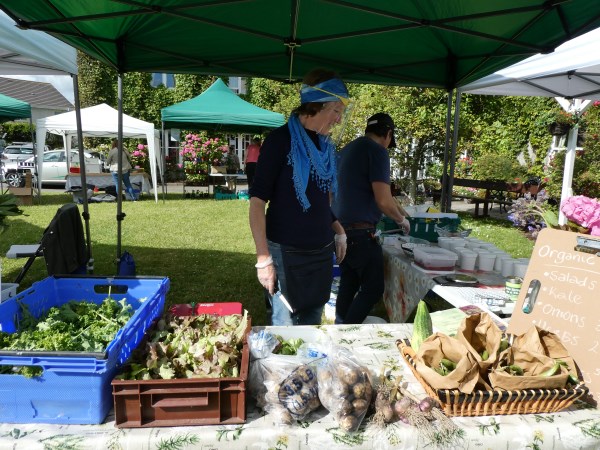 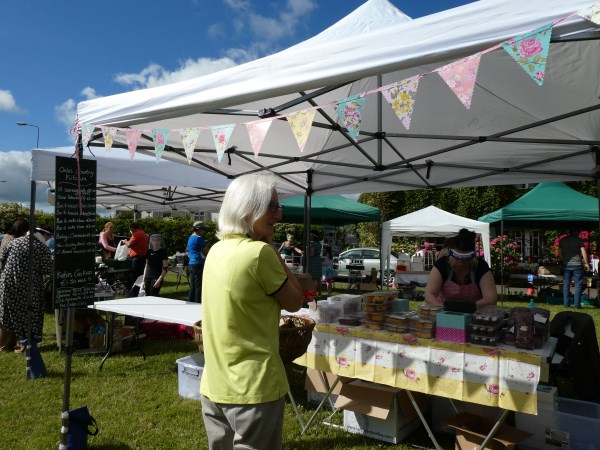 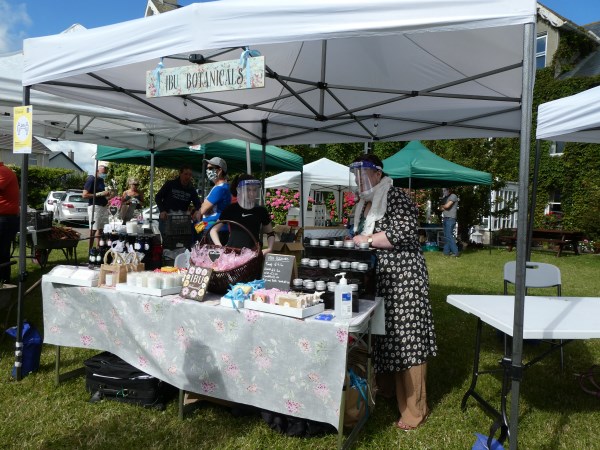 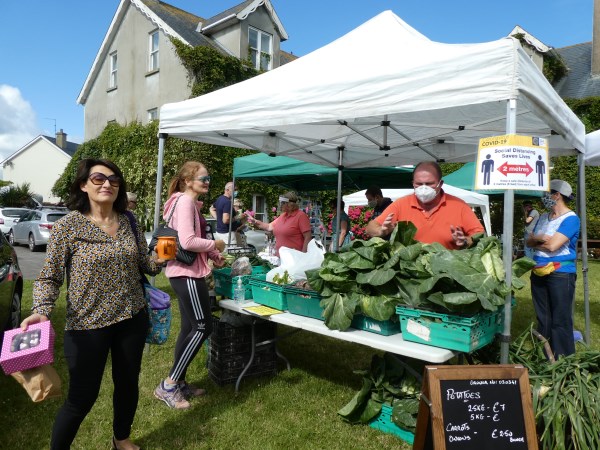 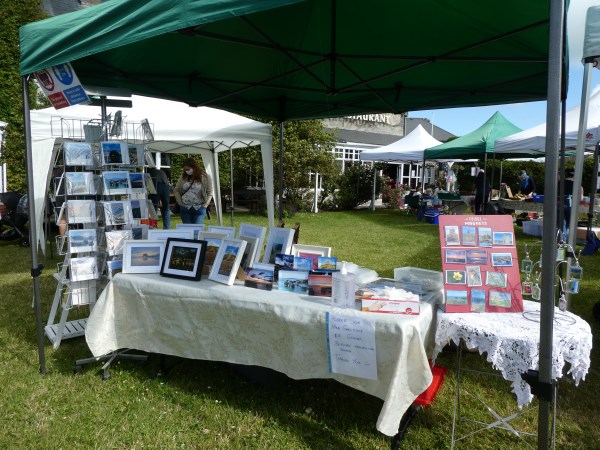 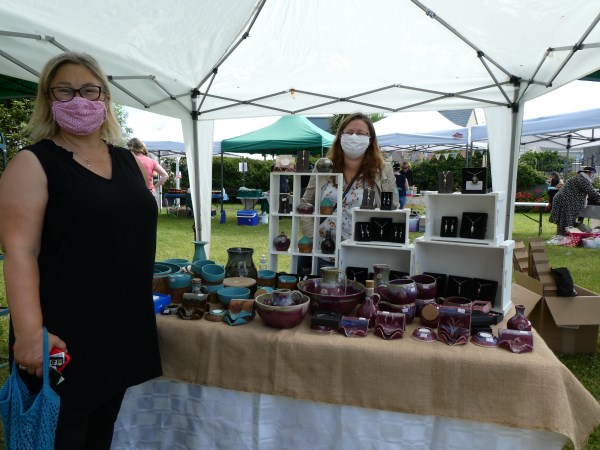 Cloth Hall, Flu Epidemic in Moyvane in 1898 and friends meeting in The Square