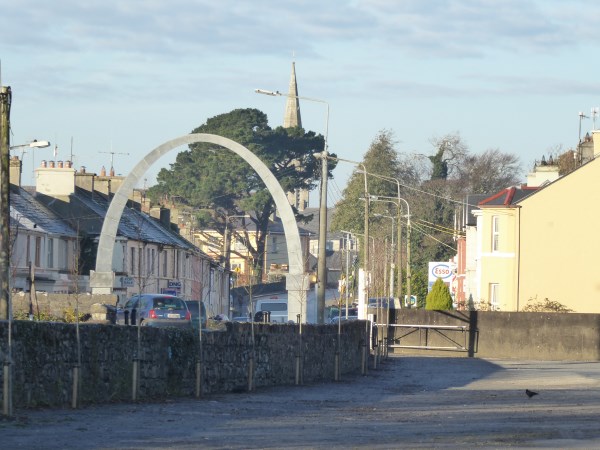 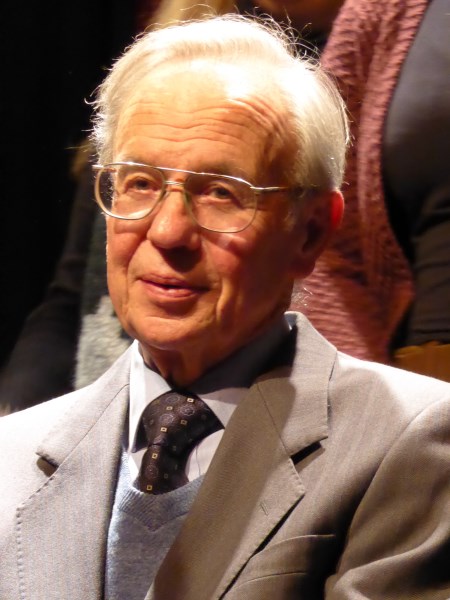 It was November 3 2016 in St. John’s Listowel and a very popular retired teacher, Pat Given was launching a collection of poetry in aid of the North Kerry Literary Trust. In retirement, Pat Given is still contributing to the literary heritage of Listowel, a town he adopted when his family moved here from Mayo in the 1930s. 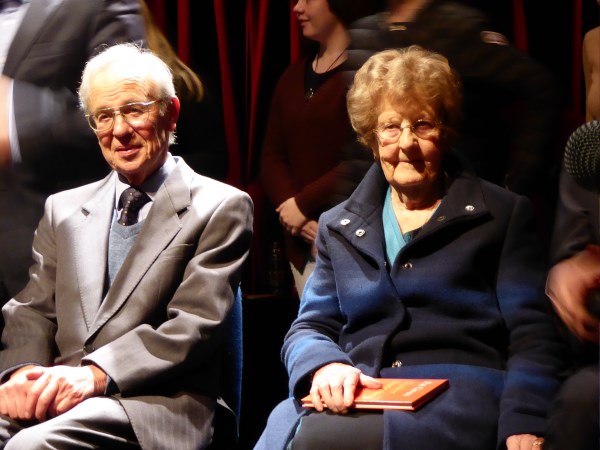 Pat and his wife, Lisha, are regular patrons of St. John’s so it was fitting that this should be the scene for the launch of  his anthology. 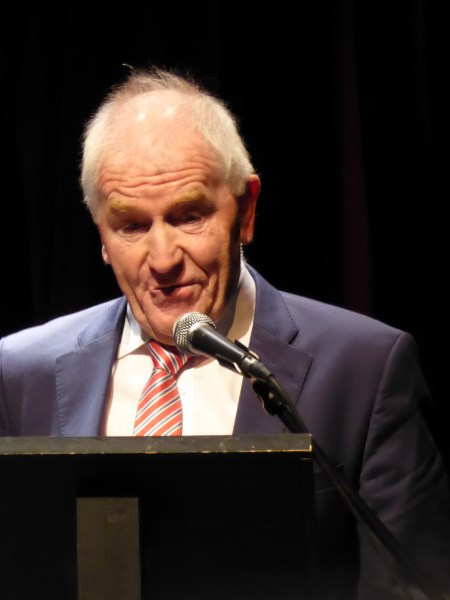 It was Jimmy Deenihan who encouraged Pat to publish another collection of his poems. Pat had previously published 2 anthologies but he had been silent for many years. Jimmy knew that he was still writing daily so he determined to help him to get back into print. The result is October Stocktaking.

Jimmy was the MC for the night and joining him on stage were four of Pat’s past pupils who had gone on to success in literary and dramatic endeavours.

Joe Murphy recalled Pat’s great Greek language and history lessons. Learning by rote was a feature of  education in the 20th century and Joe could still decline a Greek verb and rattle off the dates of Greek battles after a gap of nearly forty years.

Billy Keane was a pupil in later years and he remembered Pat with fondness. Pat and John B. Keane grew up as part of that great gang of boys in Church Street. Billy read the poem which gave the book its name, October Stocktaking.

Gabriel Fitzmaurice donned the old school tie and took us back to the heyday of St. Michael’s. He recalled inspirational teachers and memorable classmates. He indulged his love of sonnets by reading one of Pat’s.

Christian O’Reilly was there to represent the younger generation of Pat’s pupils who remember him more as a teacher of English than of the classics. Christian is a very successful playwright and TV and film screenwriter and he was happy to return to his native Listowel to celebrate with his former English teacher.

John Mc Auliffe, poet and Reader in Modern Literature and Creative Writing at the University of Manchester, is also a part pupil. He was not in St. John’s for the launch but he contributed a testimonial to the book as well.

We all know that St. Michael’s College was not a bed of roses for all of its pupils but it did provide a classical education to compare with the best schools in the land at one time in its history. These bright, successful past pupils form a very loyal old boys network and it was well in evidence on December 3 in St. John’s to thank and celebrate with a gentle giant of St. Michael’s academic history, Mr. Given. 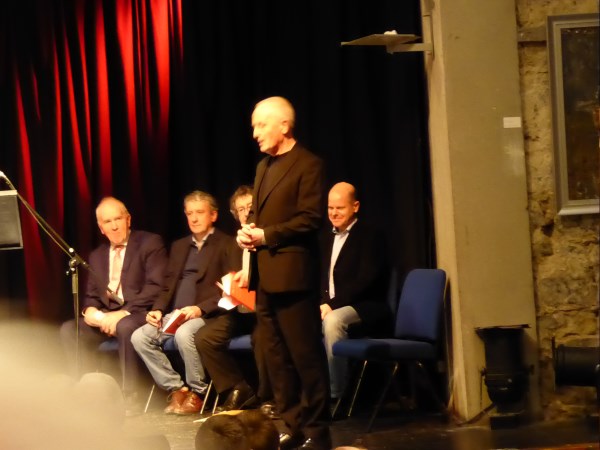 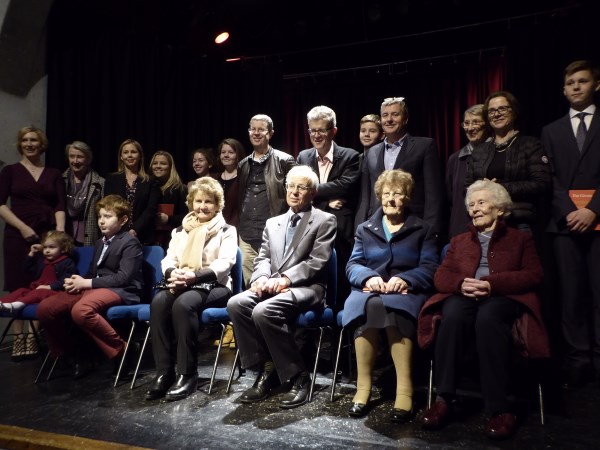 Pat posed for photos with Lisha, Seamus, Peter and John and his extended family.

Humans of Listowel Bank of Ireland 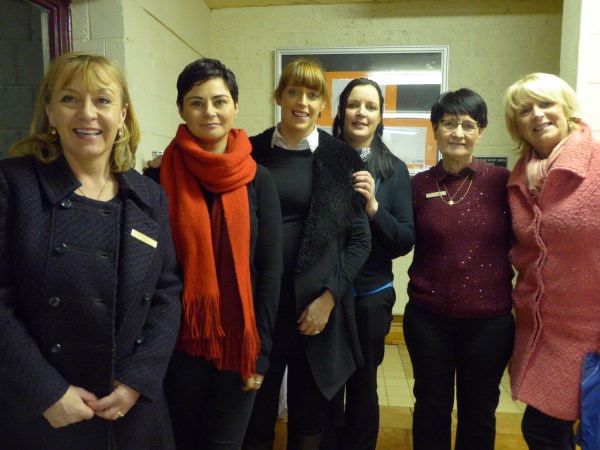 Christmas time is a great time for annual local history journals. This one is new to the scene and is a great read…probably also a collectors item, a first edition 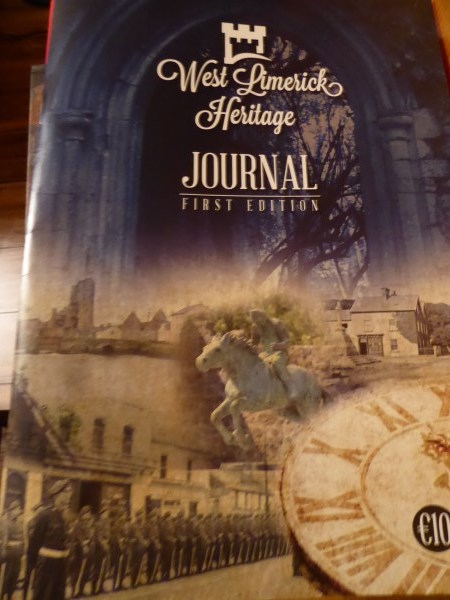 You will spot a few faces familiar to Listowel people at the launch of this magazine. 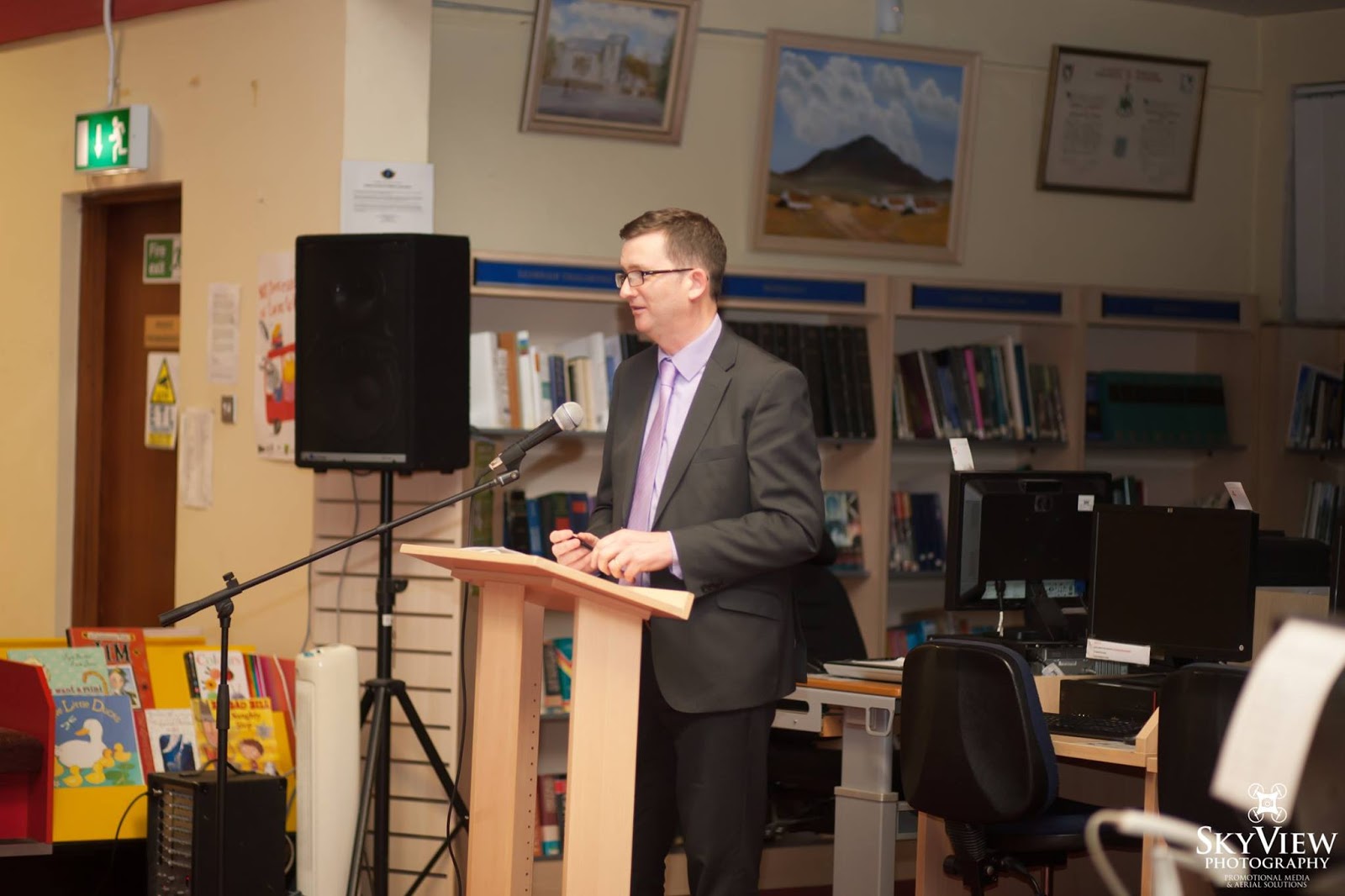 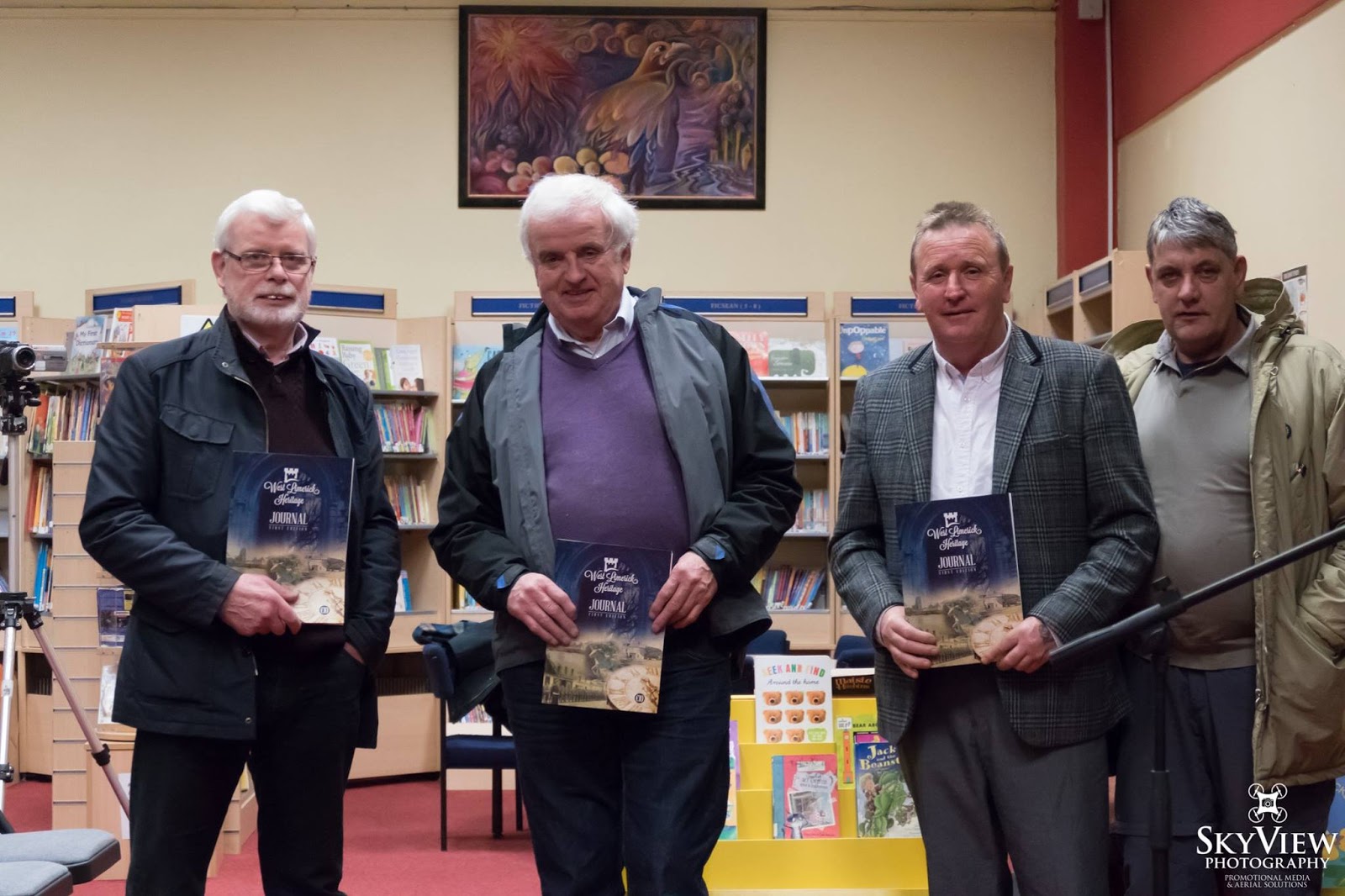 Christmastime in Kerry Long Ago

With Tambourines and Wren
boys

I was questioned one time by
the BBC one night behind at Cantilons.
They sent me word “can you
come to Cantillons the same night to give them any information I had
about the Wren.  I promised I would.  I went back and They came.  There are just three of them come-one of them
was a publican inside in the town of Listowel, John Keane.  But I didn’t know the headman at all of the
BBC.  And that was the man that was
questioning me.  The way he questioned me
was-he asked me what I knew about the Wren.
He asked me how long I was going with the Wren boys.  I answered him and I told him “I’m
going, sir,” says I, “from boyhood to manhood”.  “What were you doing,” says he,
“in the Wren?”  “I used to
tip, Sir,” says-“I was a drummer.”  He asked me what class of a drum-“was it
a big drum or a tambourine?”  I told
him I drummed either one or the other of them.
He asked me had I got a tambourine.
“No sir,” says I “I’m out of them” “well, we’ll
get you one,” says he they went and they searched the same night and they got
a tambourine for me as any case and the BBC man asked me what would I drum.  I told him I’d drum reels, jigs, marches, or
hornpipes.  He asked me what special tune
used we play going with the Wren.  I
answered him and told him it was the Wrens hornpipe.  He asked me could I hum it.  “I will,sir,” says I. There was no
music there but the tambourine.  I drummed
the hornpipe and it was taken down. 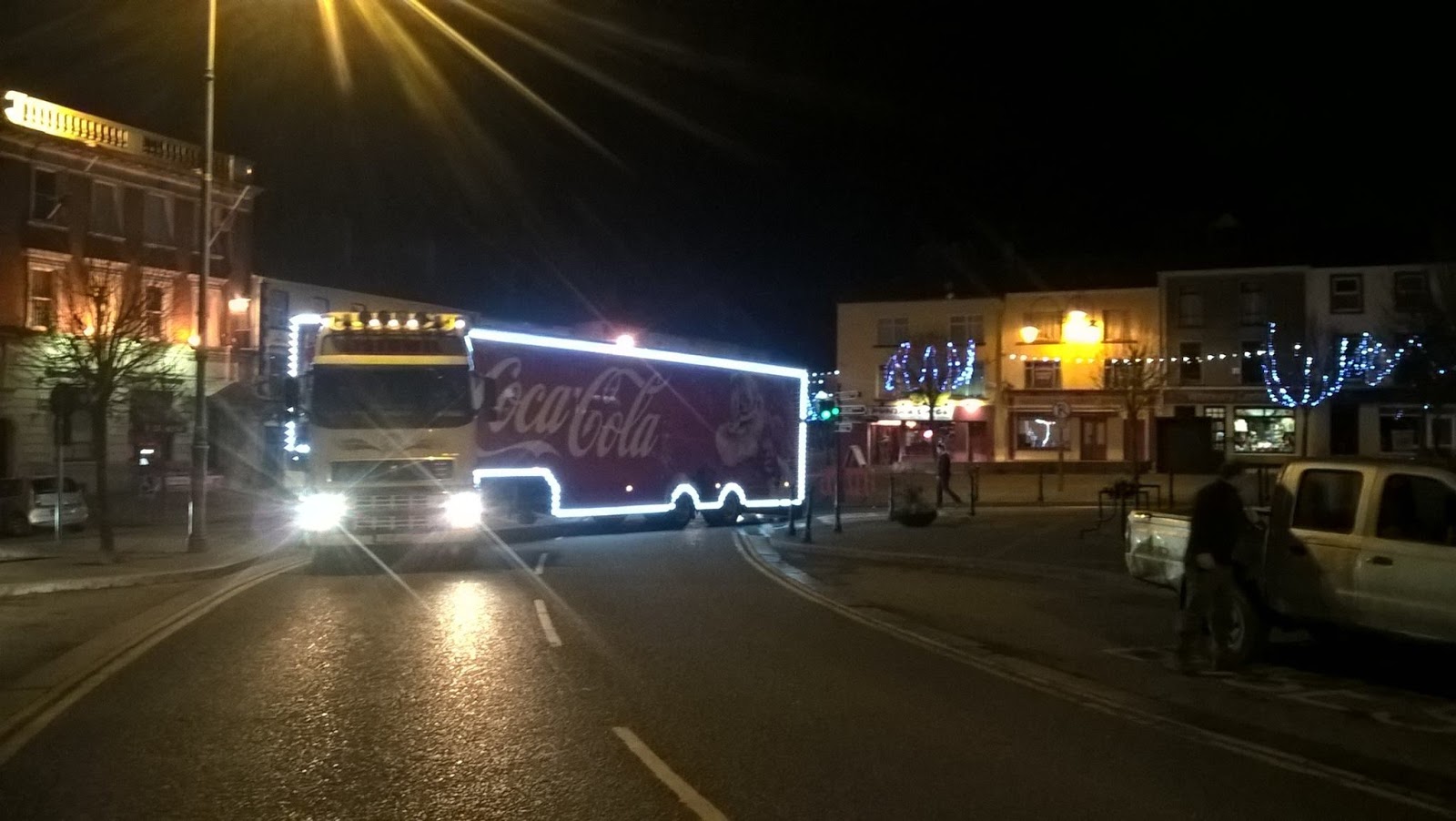 Niamh Stack snapped the Coca Cola truck being towed by  Listowel Transport tractor cab as it left town on Sunday night, December 11 2016. Apparently they needed the help of Listowel Transport as the big American tractor that was attached to it in the Square is not really great for manoeuvring it on Irish roads. 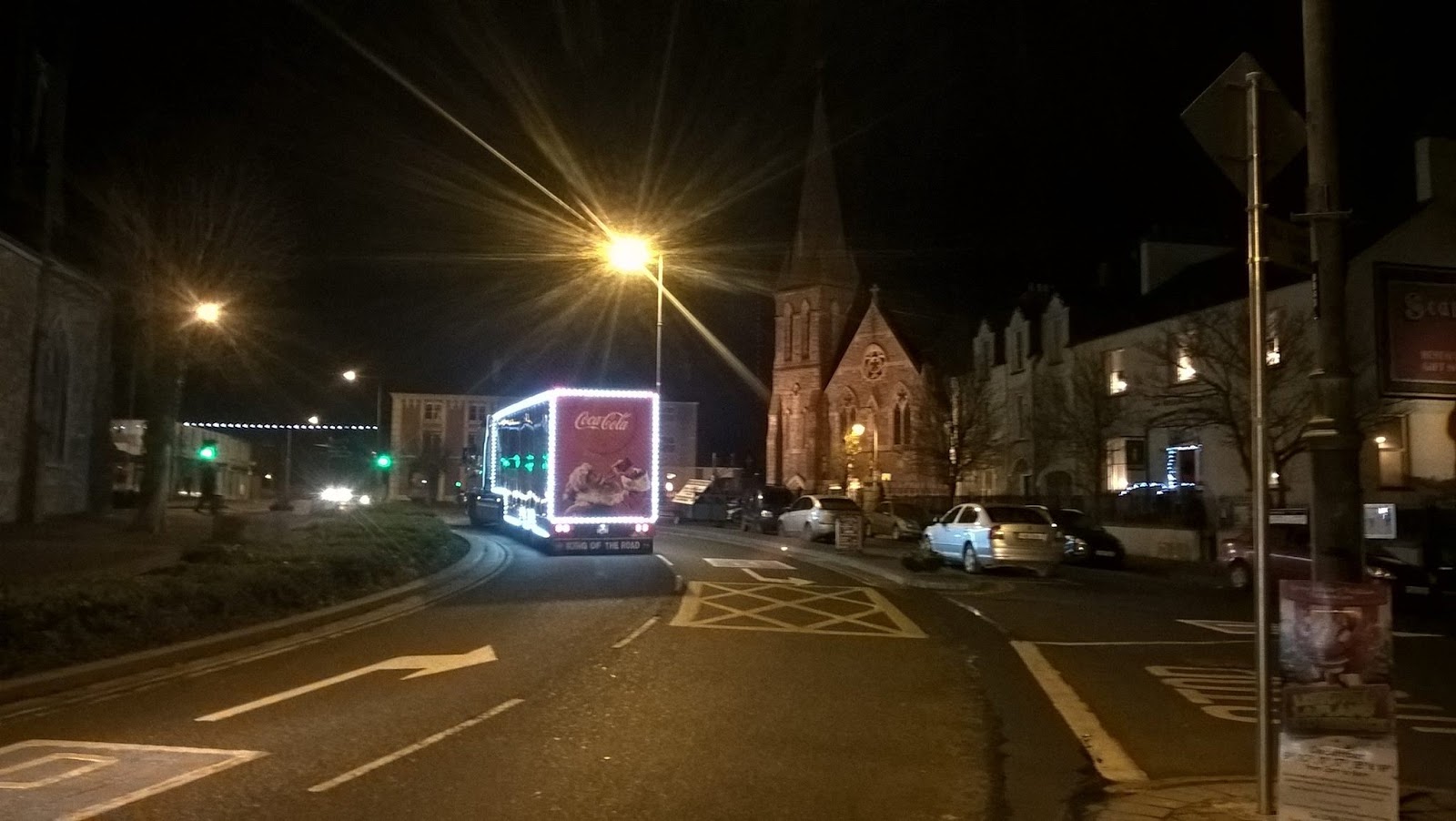 Damien Stack shared this photo on Facebook as Listowel bad farewell to the truck that brought so much excitement to town for one day only on Sunday December 11. 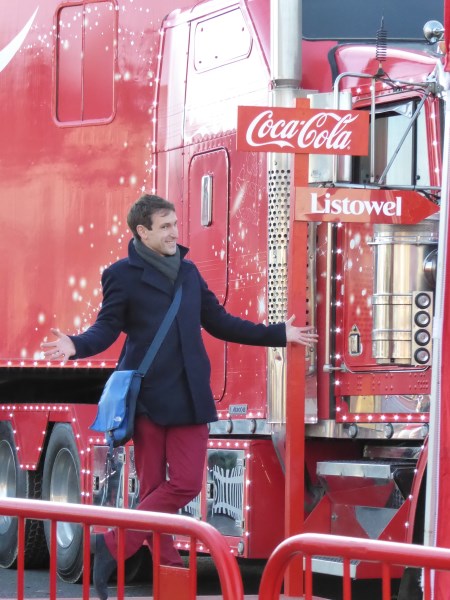 Damien O’Mahony is the local hero who made it happen. It was because of his putting of the case on 2FM for a stop in Listowel that the bandwagon rolled into town. 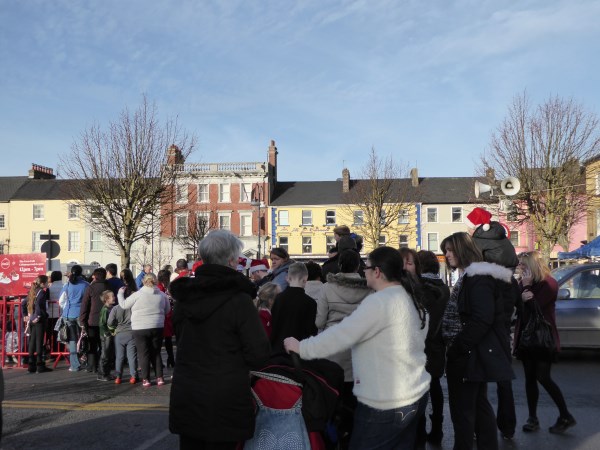 From mid morning till nightfall families queued for a taste of the magical experience. We got a can of Coca Cola, our photo taken with the truck and a virtual reality sleigh ride, all for free. A Gospel choir set the atmosphere and 2fm broadcast live from The Square.

In the afternoon the Love Listowel activities kickstarted the street party. Traders mounted a Christmas Market, a céilí swung into life on William Street (which was temporarily reclosed for the party) and local actors played out a scene in McKenna’s window.

The town was jam packed with happy people, full of Christmas good spirits. The word I heard often was  “proud”. For one day everyone was proud of the town, the town’s people and everyone’s ability to put on a show. 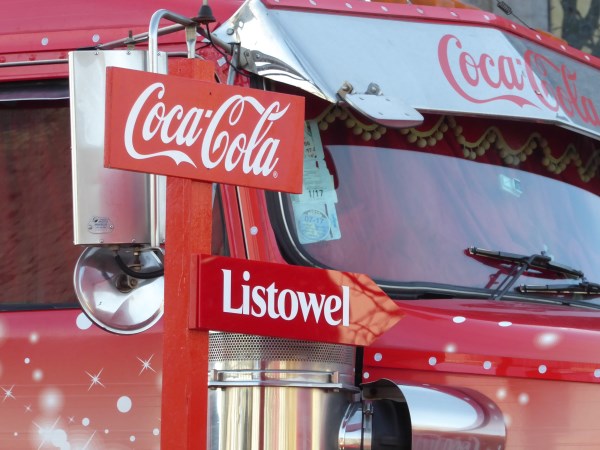 All roads lead to Listowel and the Coca Cola event. 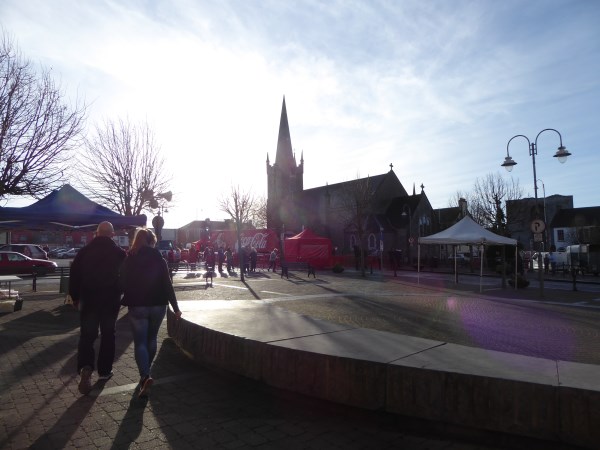 As dawn broke over Listowel on Sunday December 11 2016, people realised that, like a Santa in the night, the truck had arrived in town and had taken up position outside St. John’s in The Square.

At 12.00 noon Damien declared the show open and the first families stood on the plinth for their photo. 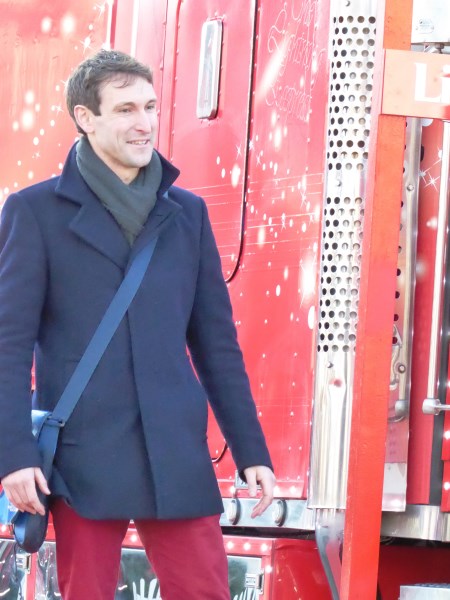 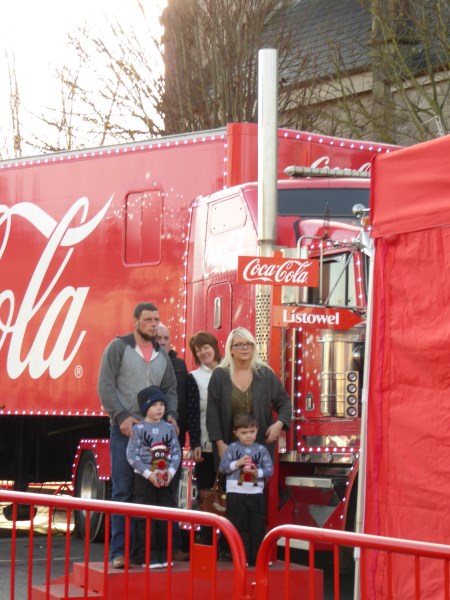 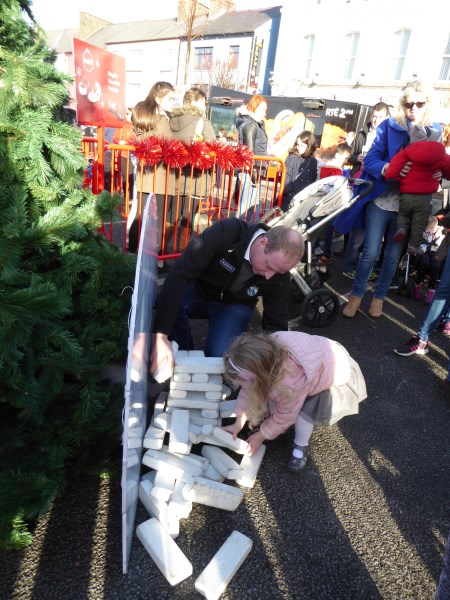 While in the queue you could play ice cube Jenga. 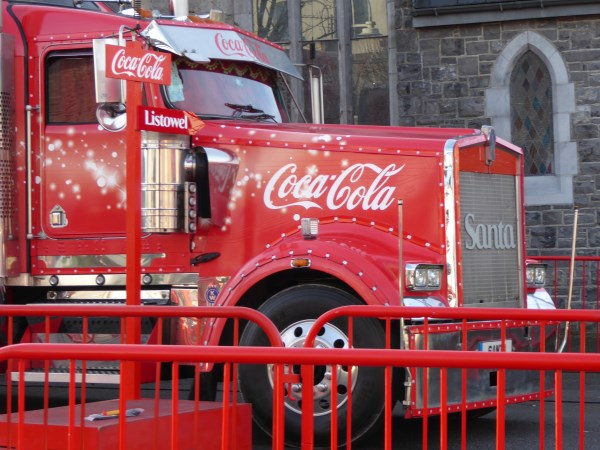 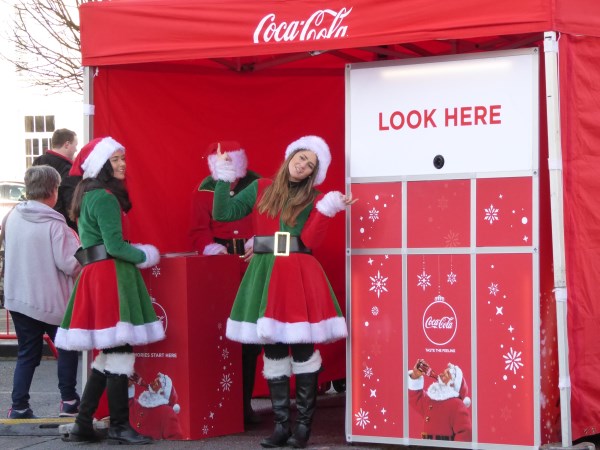 When you got to the top of the queue, you stood on the step and obeyed the elves instructions to smile and pose. The snapper snapped and within seconds you had a lovely souvenir photo to take home. 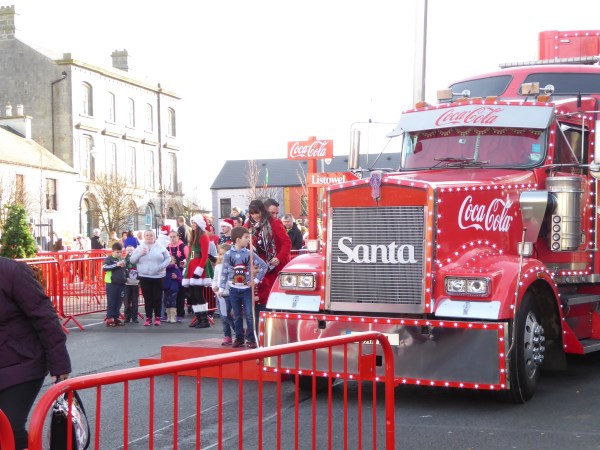