This is how it’s done today, tractors, machinery and everything done quick, quick quick.

I recall a more relaxed time in the meadows, when  haymaking took several days. You watched for any sign of a settled spell and when it arrived the hay was mown with a side bar. This was a vicious looking implement with a long bar of triangular blades. If memory serves me right, these were called socks. This mowing bar would have been edged with a rasp in readiness for this day. When the hay was “down”, everyone was on edge. A spell of rain now and everything would be ruined.

A meitheal was gathered and the hay was turned with pikes or a hay turner to expose the underside to the sun.

When the hay was dry or “saved” the big day came. This was haymaking day and it was a long hard backbreaking day. The hay was raked into rows, gathered into cocks and finally piled into wynnds, the field was raked and everyone rested easy. Even if it rained now, the hay was saved and so fodder for the cattle for the winter was assured. 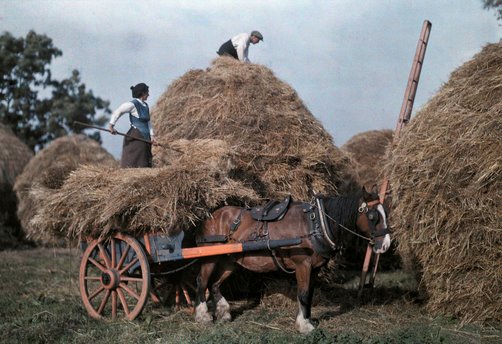 Haymaking in 1920 from National Geographic. 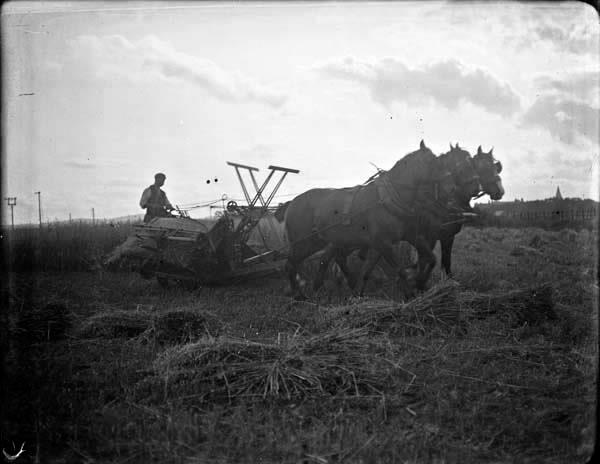 Harvesting corn with a reaper and binder in 1900.

You will see from this picture that this farmer is working with three horses. This took a lot of skill. When the corn was cut it was bound by the machine into sheaves. These then had to be “stood” into stooks to await the arrival of the thresher.

I remember well the excitement of the arrival of the threshing machine. It usually pulled in the night before, in readiness for the big job of work the next day. 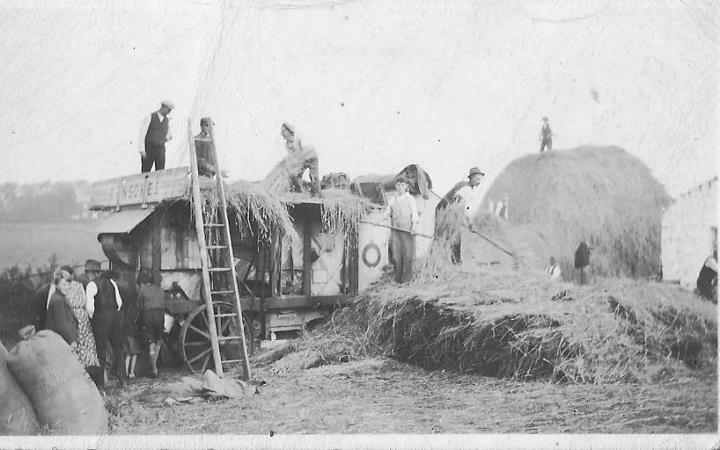 Those three men you see on top of the machine are feeding the sheaves into the machine. The 2 with pikes are keeping them supplied. The gang at the front of the machine  are filling the corn into sacks. Notice the small pile of sacks at the foot of the ladder and the filled ones in the foreground. The threshing process is separating the corn from the straw. The straw is being built into a rick at the back of the machine. This photo was taken near the end of the day as the straw rick is huge and the pile of sheaves is low. At the back of the machine there would be a pile of chaff, the horrible prickly ears that were cut from the corn. This was the only useless byproduct of threshing. The work done, the threshing machine would move on to the next farm and the farmyard fowl would be let out into the haggart for their annual post threshing feast. 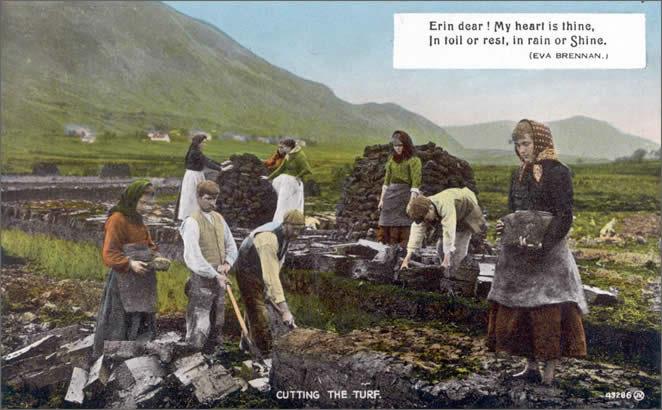 A postcard depicting turfcutting in the 1900s.

On a completely different note: this is well worth a read as Billy Keane bares his soul in this honest and revealing piece in yesterday’s Irish Independent.

History was made today when Queen Elizabeth visited a Roman Catholic church in Enniskillen as part of her trip the Northen Ireland. This gesture has much more profound connotations than any handshake, I think. 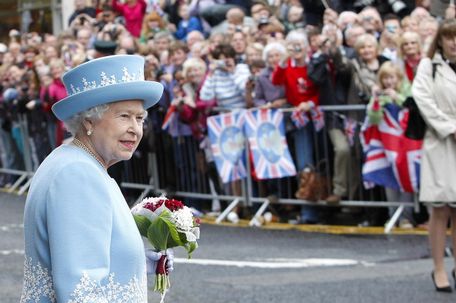