March 17 2017 beat all records for inclement St. Patrick’s Days. We had wind, rain and freezing temperatures. Many parades were cancelled but Listowel’s went ahead with much diminished attendance.

I had young visitors for the weekend so we set out determined to brave the elements and sample a Listowel parade. 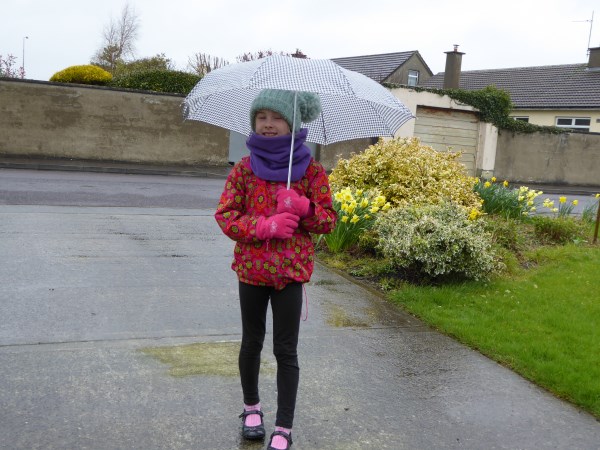 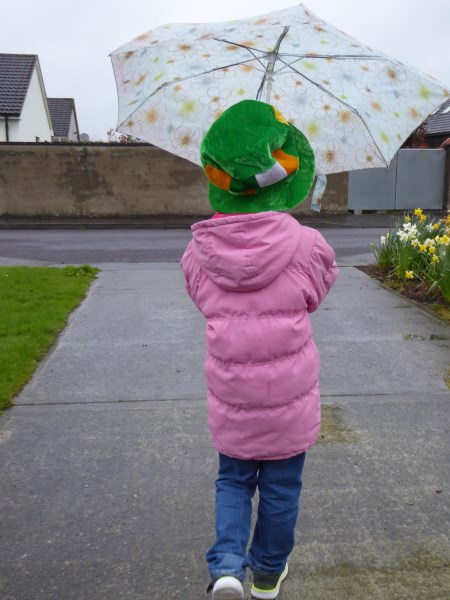 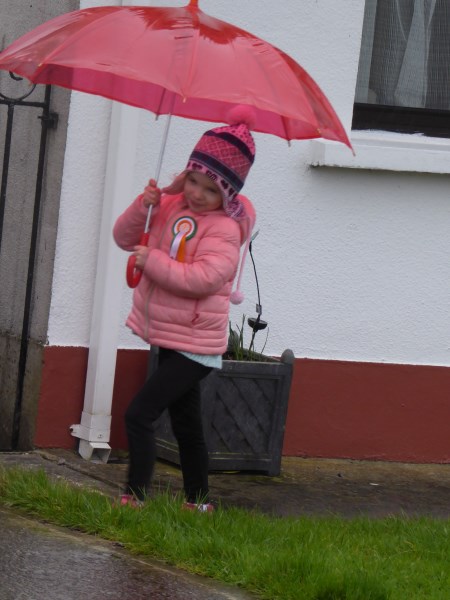 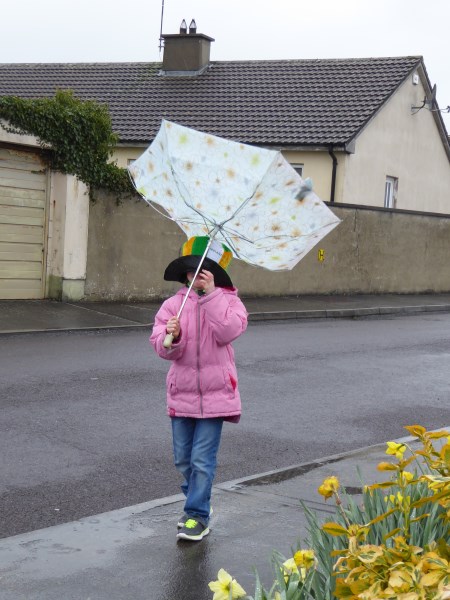 We set out with three umbrellas. By the time we reached the end of the drive we had 2 and 100 yards later we were down to 1. I suppose we should count ourselves lucky  the wind was so strong it didn’t sweep a child as well as a gamp. 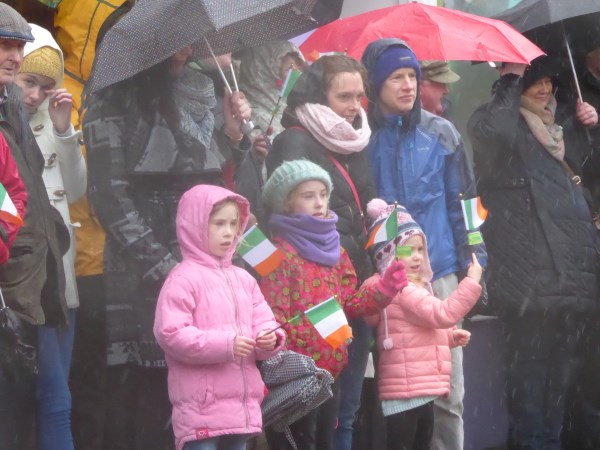 There they are at their first viewing position, umbrellas gone, flags waving, drenched. 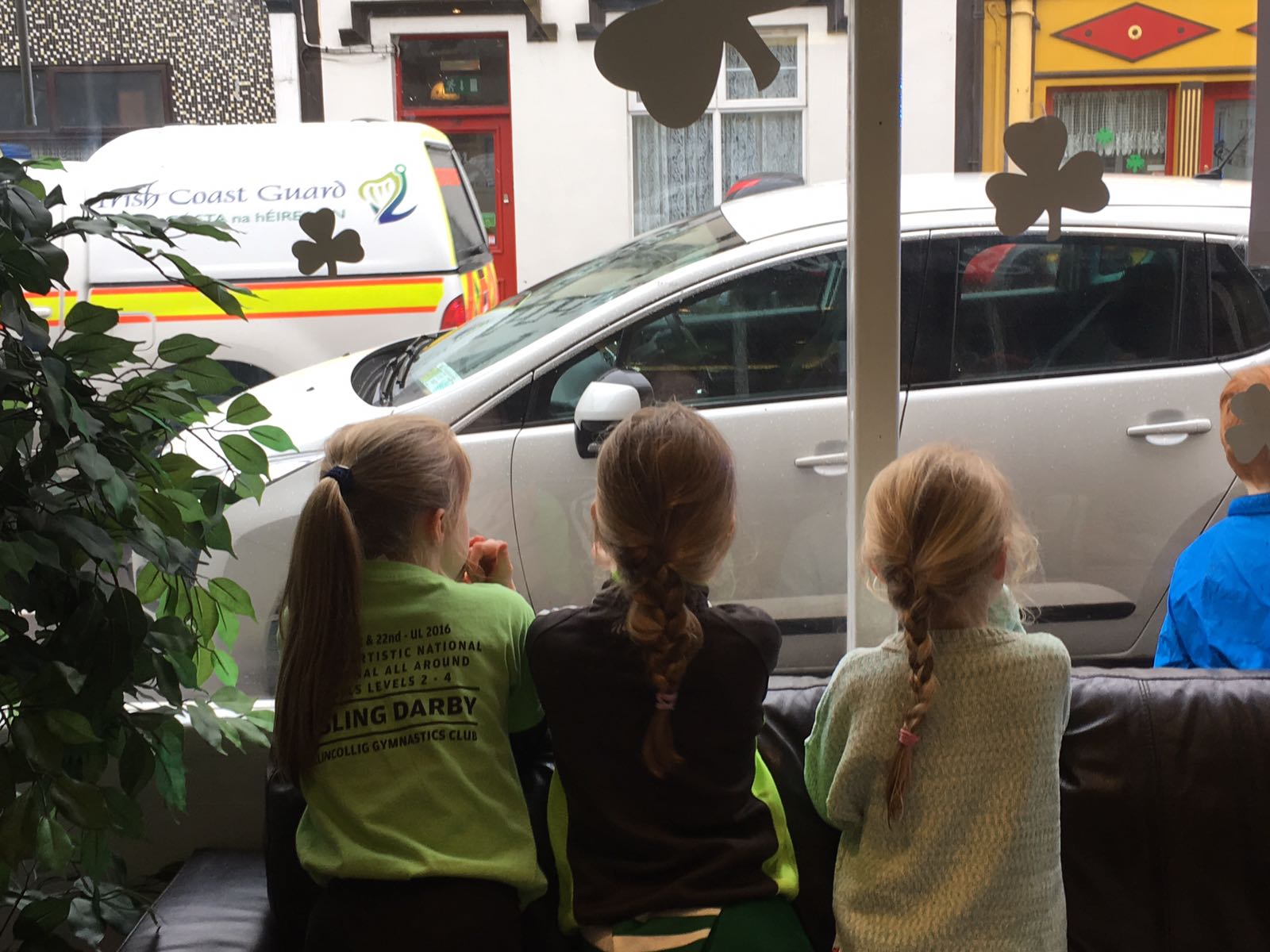 Here they are at their eventual viewing position, safe and warm inside the window at Scribes.

Meanwhile Nana braved the downpour to bring you the story of the parade. 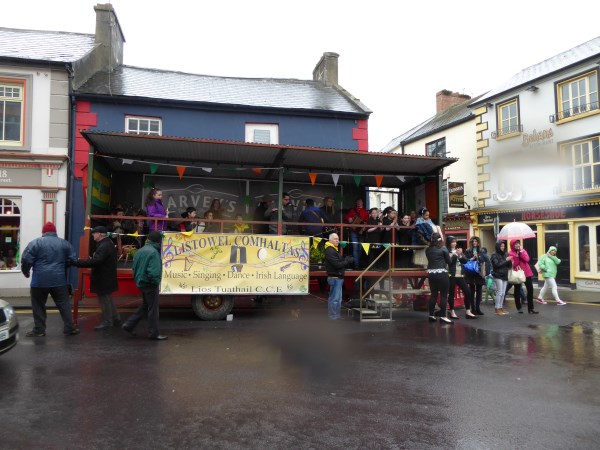 This year Listowel Comhaltas erected a stage outside Mag’s delicatessen. This was a bit of a mistake in my opinion as it divided the already small crowd.  It did give a chance to some dancers and musicians to showcase their talents…but they were soaked. 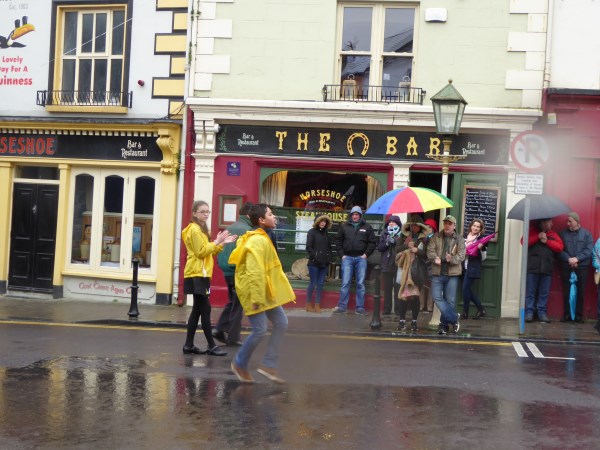 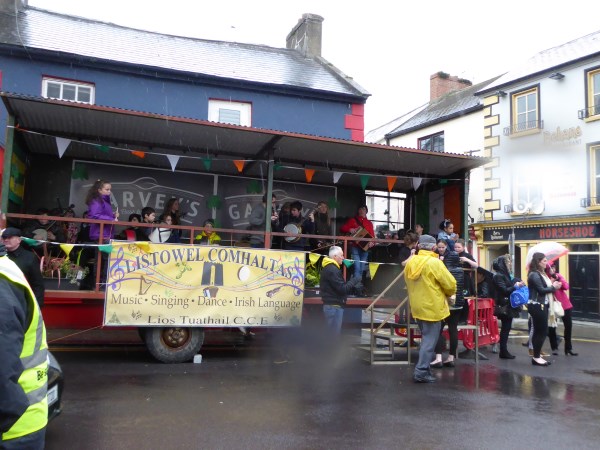 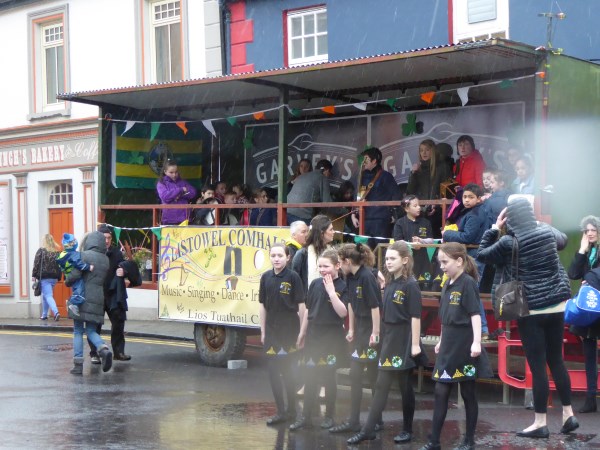 These girls shed the raincoats and gave of their almighty best despite the skies opening above them. 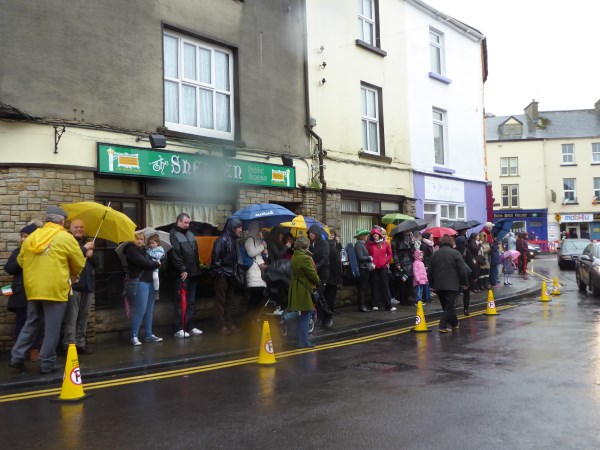 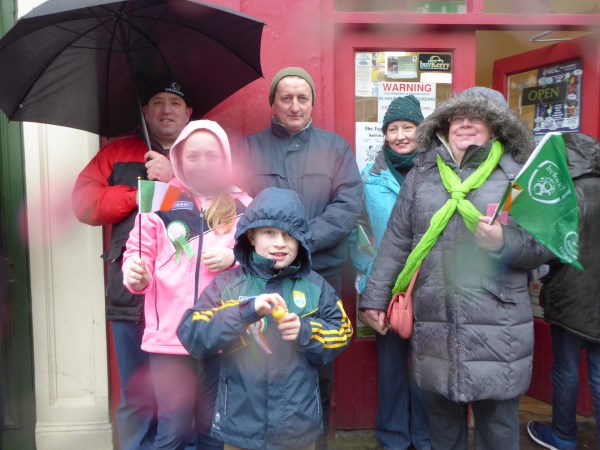 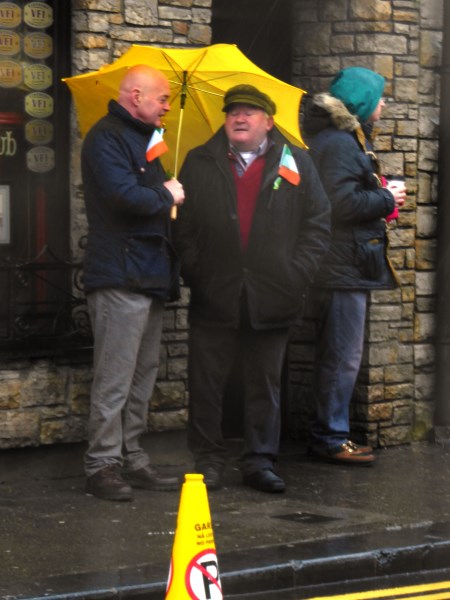 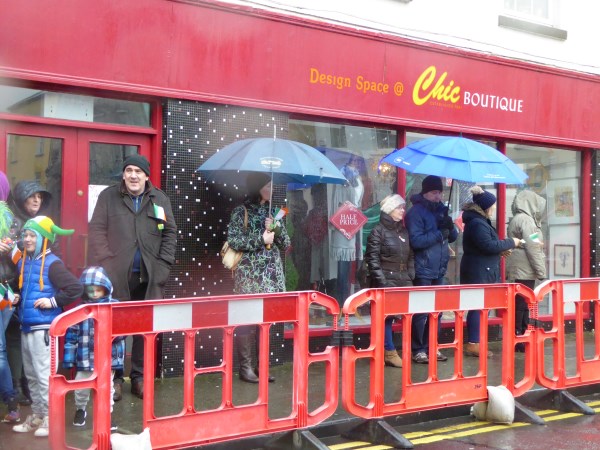 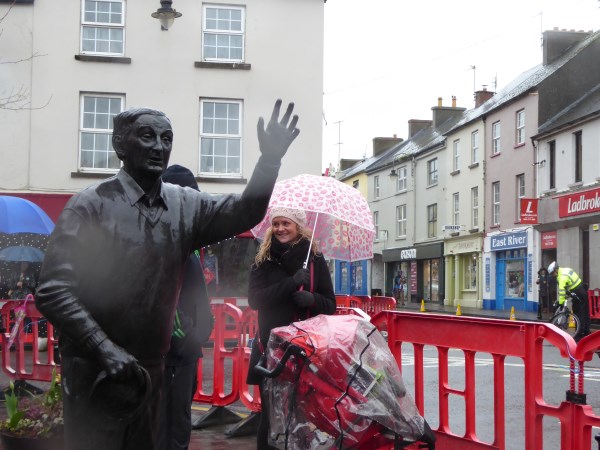 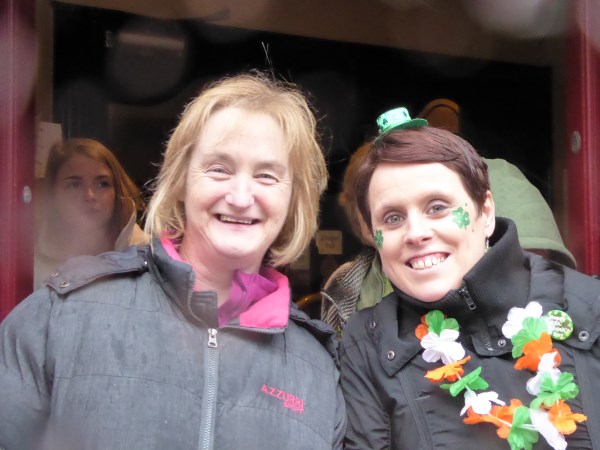 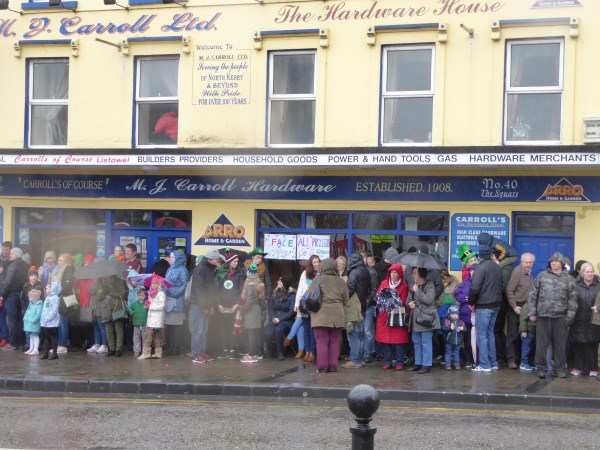 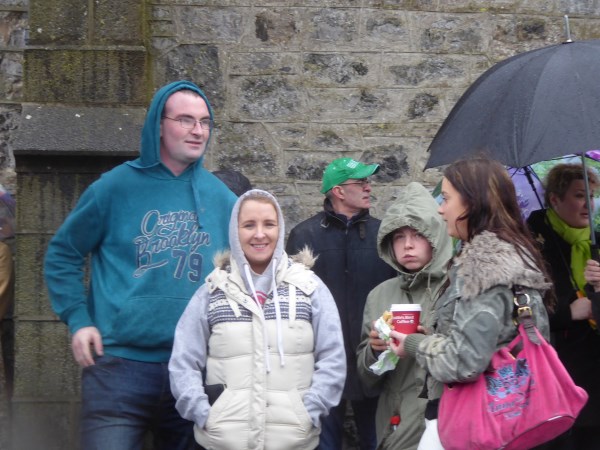 Any vantage point offering a spot of shelter was taken up. 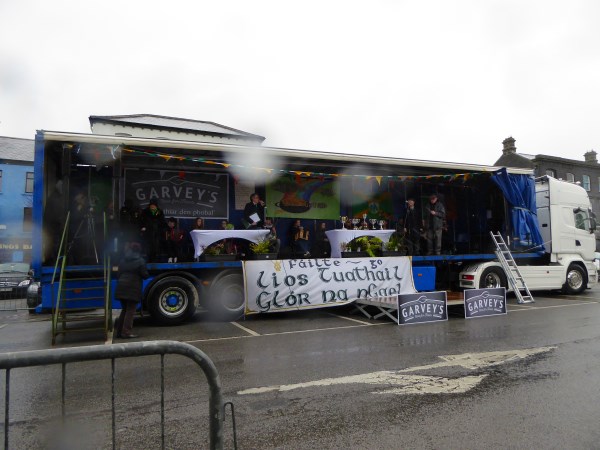 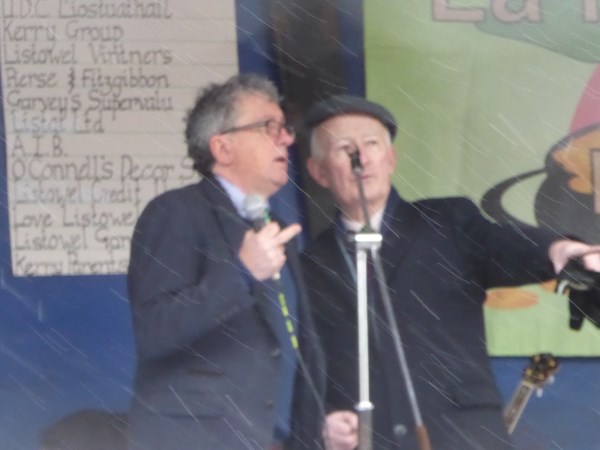 From the relative comfort of the viewing stand Billy Keane and Matt Mooney directed operations. 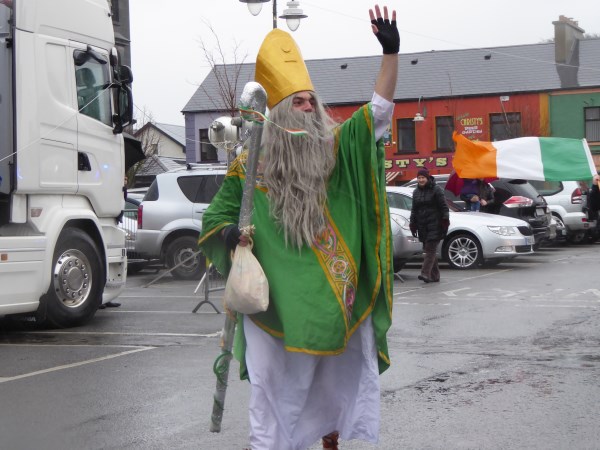 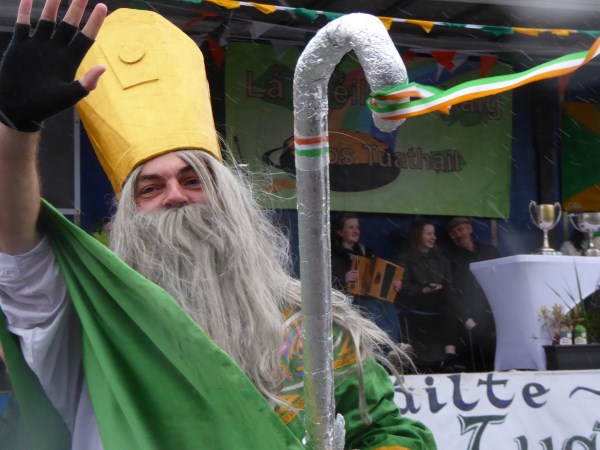 There was a big welcome for St. Patrick. For once I got a few pictures unspoiled by raindrops on my lens. 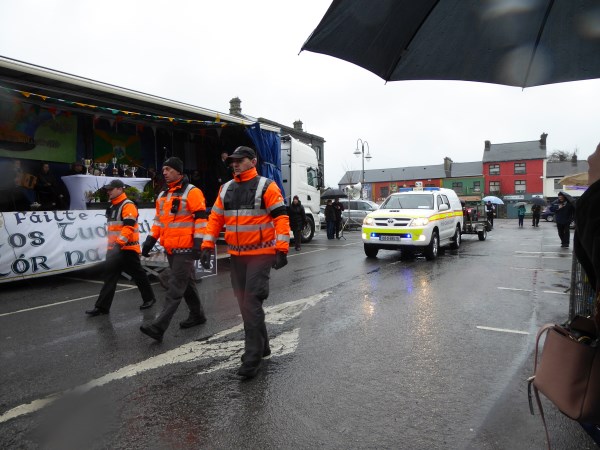 We forgot about our own discomfort for a minute as the rescue service vehicles hove into view. Billy asked us to turn our thoughts in silence for a minute to the ongoing search for three of the rescue personnel who went down with their stricken helicopter off Blackrock lighthouse in Mayo. 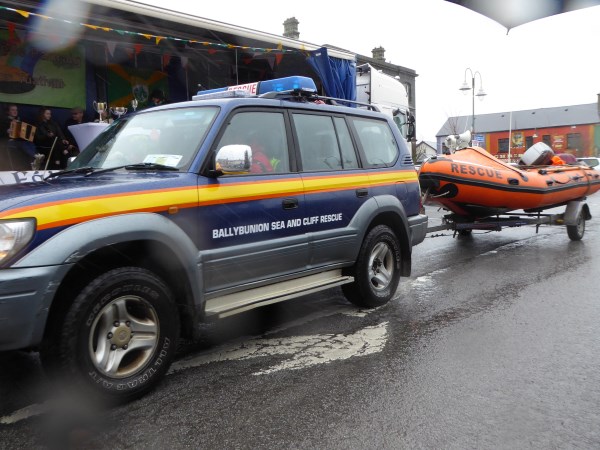 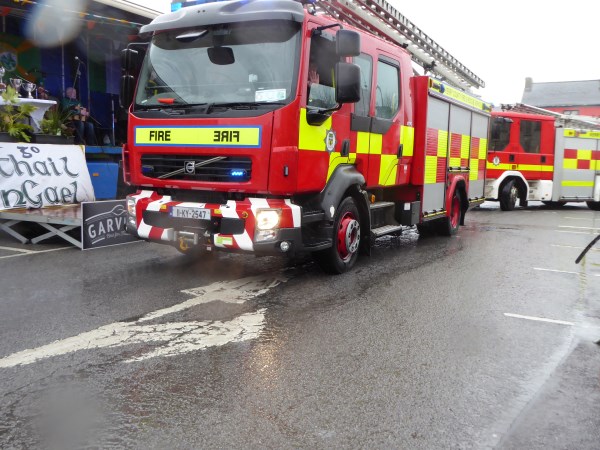 As a mark of respect to their fallen colleagues the fire sirens of the local service remained silent.

(More from the Listowel parade tomorrow)

They had snow in New York and Boston but Denis Hegarty of Tullamore made it there before the storms struck. 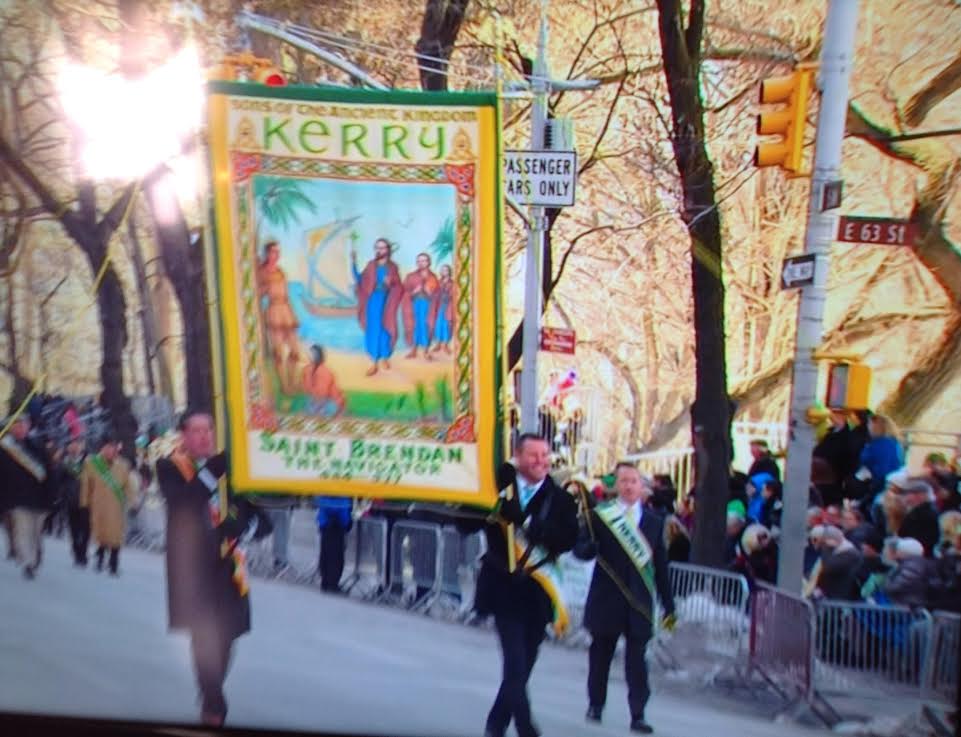 This photograph made it to the TV. 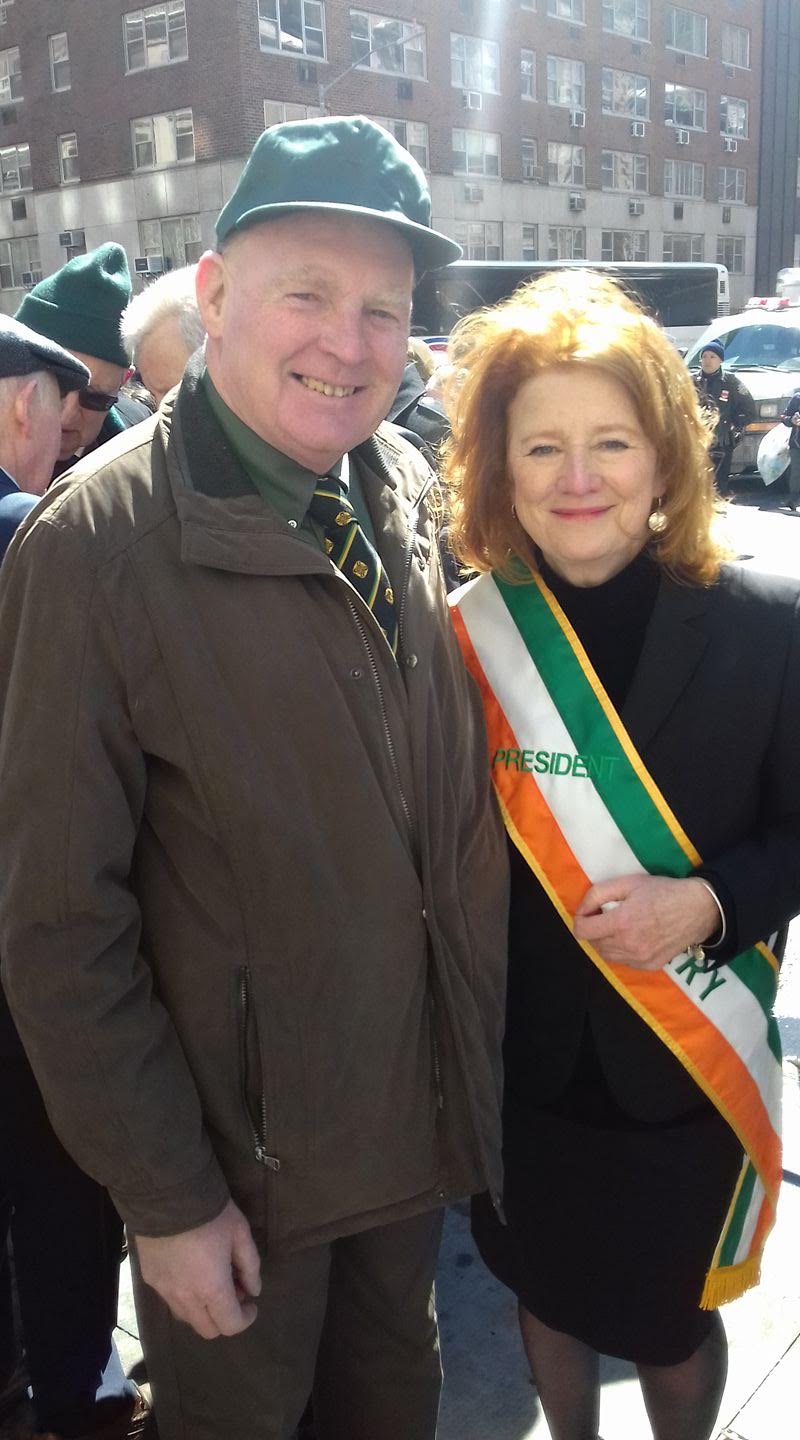 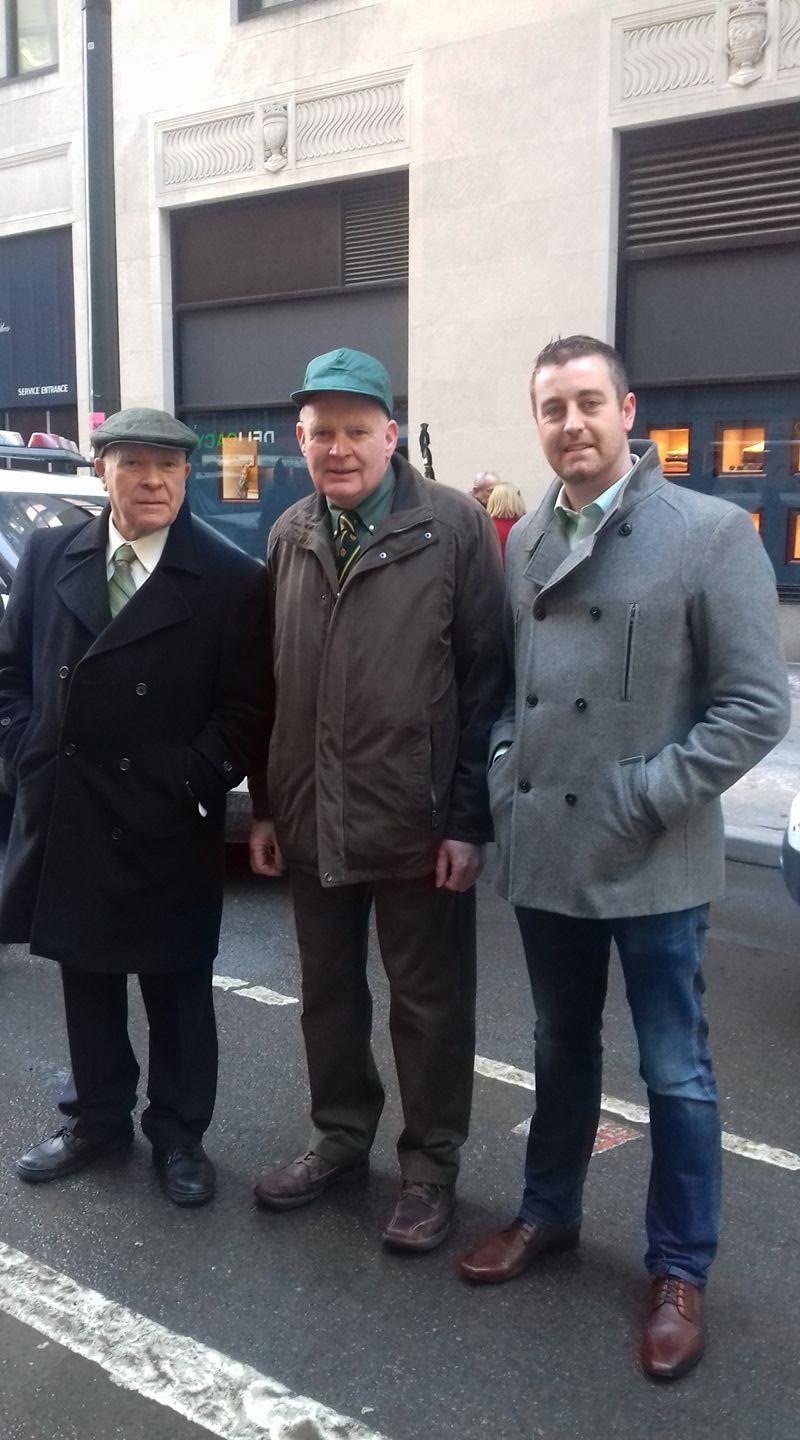 with cousin Tim Hayes, Woodlawn NY and Gortnaminch on left 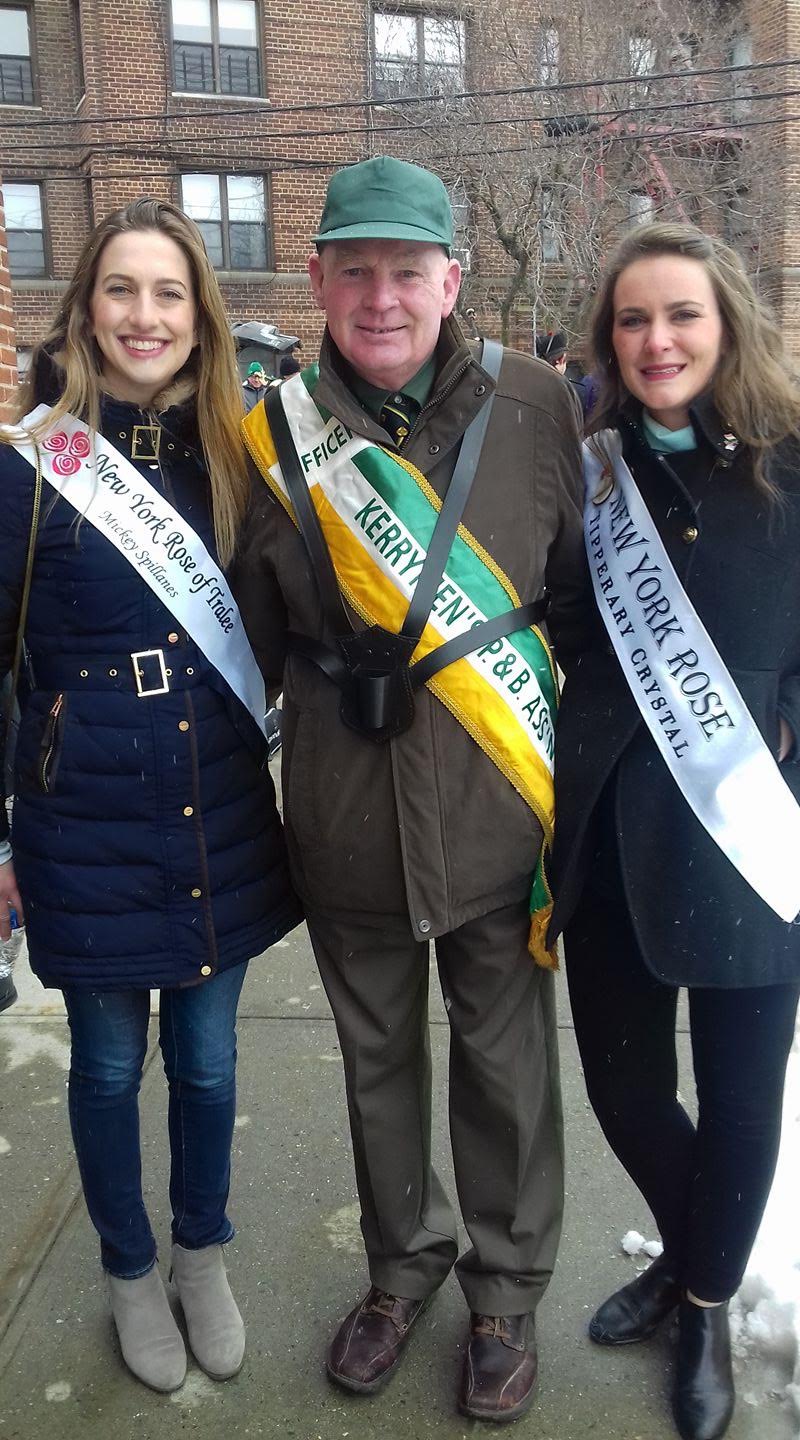